(French Chemist Who Discovered the Role of Oxygen in Combustion)

Antoine Lavoisier was an 18th century French chemist, who was known for having recognized one of the most important chemical elements, oxygen. Not just that, he also identified the significance of this gas in the process of combustion. He developed an interest in science while still in school, and though he was a qualified lawyer, he ended up working as a scientist instead. This genius' contribution to the field of chemistry, in particular, is extremely indispensable, and forms the basis of several present day scientific theories. He stated that during the process of combustion, not only is a substantial quantity of air used, but there is also a visible gain in the mass of the substance. He improved upon the works of scientists like Joseph Black and Joseph Priestley, especially contributing to the experiments conducted by the latter. His work was so remarkable that the French government decided to hire him as a supervisor for the ammunition department, working specifically on the production of gunpowder. However, despite all his efforts, during the 'Reign of Terror' in France, twenty-eight Frenchmen, including Lavoisier, were convicted of crimes against the nation by the political leader Maximilien de Robespierre. Though the wrongly accused scientist was executed early in his life, he is idolized by scientists across the globe for having revolutionized the field of chemistry Marquis de Sade
DID WE MISS SOMEONE?
CLICK HERE AND TELL US
WE'LL MAKE SURE
THEY'RE HERE A.S.A.P
Quick Facts

Cause of Death: Guillotine

French People
French Men
University Of Paris
Male Chemists
Virgo Scientists
Childhood & Early Life
Antoine-Laurent de Lavoisier was born to well-to-do parents, in Paris, France, on 26 August 1743.
The child pursued his primary schooling from the 'Collège des Quatre-Nations', graduating in 1761. In school, he developed an interest in subjects like botany, chemistry, mathematics and astronomy. His philosophy teacher, Abbé Nicolas Louis de Lacaille, influenced his love for meteorological observation.
By 1764, Antoine graduated from the school of law and became a qualified lawyer, though his actual interests lay in scientific studies. 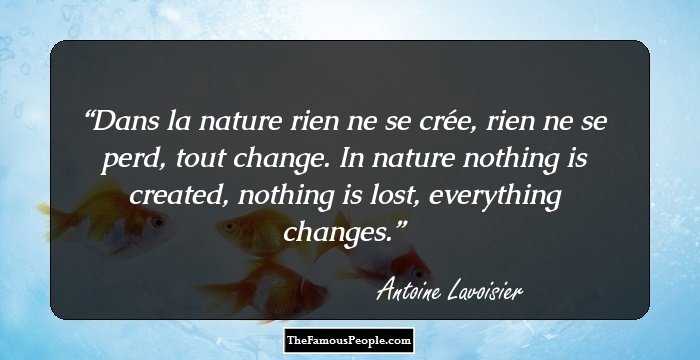 Quotes: Nature
Continue Reading Below
Career
Lavoisier's passion for science grew mainly because of the works of scholars like Étienne Condillac and Pierre Macquer. During 1763 to 1767, the young man was trained in geology by Jean-Étienne Guettard, who the former assisted in a survey of the Alsace-Lorraine territory.
The year 1764 was in particular quite fruitful for Antoine, since he published his first ever scientific paper, dealing with the properties of the sulfate mineral, 'gypsum'. This paper, which was read to the 'French Academy of Sciences', marked the beginning of his career as a scientist.
In 1768, the 'French Academy of Sciences' employed Lavoisier as one of its members, in the capacity of which he began making France's earliest geological map.
It was in 1772 that Lavoisier found out the effects of combustion of phosphorus. He realized that the process required a lot of air and the consequence was a gain in mass.
Later, he conducted the same experiment on sulphur, and arrived at the same inferences. This research proved to be one of the most pioneering chemical theory ever deduced, which remains applicable in the field of science, to this day.
From 1773-74, the talented chemist conducted extensive research on the works of other scientists, including that of Joseph Black from Scotland. Antoine's publication named 'Opuscules physiques et chimiques' ('Physical and Chemical Essays'), was an important example of such research.
Black specialized in alkalis of all kinds, stating the dissimilarities between mild and caustic forms. In this regard, Black had experimented on chalk and quicklime, drawing his conclusion that mild alkalis are comprised of what he termed as "fixed air". This "fixed air" was different from the air we breathe and is now known as carbon dioxide.
It was Lavoisier who surmised that the same "fixed air" was emitted when metals were burnt along with charcoal in a limited reserve of oxygen, a process known as calcination.
The French chemist also inferred in 1774 that any substance can alter its state, liquid, gaseous or solid, during a chemical reaction. During this process however, one does not see any difference in the mass of the substance.
Continue Reading Below
The same year, he met Joseph Priestly, an English scientist, who urged Antoine to carry on further experimentation on the gas released while burning mercury.
Lavoisier's research was so significant and impressive that along with three other scientists, he was given the responsibility of improving the quality of gunpowder used by the French army, in the year 1775.
During 1777-87, it was the brilliant French scientist who identified oxygen, named it so, and determined the fact that sulphur was actually an element, contrary to the established belief of the day. He also discovered hydrogen gas, and stated that there was a possibility that a substance having the properties of silicon, existed.
Antoine was one of the four scientists who set down rules for naming chemical substances in a systematic way, in 1787. The other chemists were Antoine François de Fourcroy, L. B. Guyton de Morveau, and Claude-Louis Berthollet. 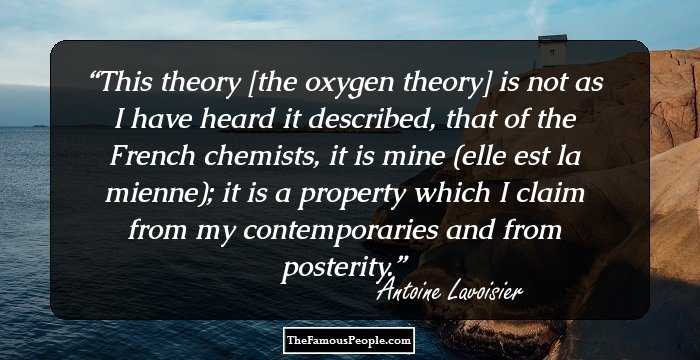 Quotes: I
Major Works
Lavoisier is best known, even today, for his invaluable identification of oxygen, and his theory determining the role that the gas plays in the process of combustion of any substance.
Awards & Achievements
In 1766, this remarkable scientist was the recipient of a gold medal, presented by the French emperor. The chemist had written a well-appreciated essay that suggested solutions to the difficulties of providing light to the roads in a city.
Personal Life & Legacy
In 1771, the young scientist married a girl fifteen years younger to him, Marie-Anne Pierrette Paulze. An intelligent young girl, she became Antoine's assistant, helping him not just with his experiments, but also with his publications.
With the advent of the 'French Revolution', Antoine soon lost his government job, and was forced to halt his scientific research. Since he was an influential member of the tax collecting establishment, 'Ferme Générale', the new French leader, Maximilien de Robespierre, labelled him a renegade.
In 1794, he was indicted for various crimes, including being a quisling of foreign scientists like Joseph Louis Lagrange, and was executed on May 8, along with twenty-seven other accused.
It was only after more than a year that the body of the famous scientist was exhumed, and his possessions were given to his wife, Marie-Anne. By then, the French government had established the fact that the scientist had been wrongly executed.
Several streets, schools and buildings have been named after this accomplished scientist.
His theories have been declared by establishments like 'Société Chimique de France', 'American Chemical Society', and the 'French Academy of Sciences' as one of greatest contributions to the field of science.
Trivia
After 1894, a statue of this great French scientist was unveiled in Paris, which was later found to have been modelled on his colleague, Marquis de Condorcet. Paucity of funds hampered its reconstruction, and after its destruction during the World War II, it has never been rebuilt.

See the events in life of Antoine Lavoisier in Chronological Order