(French Author and Winner of the 1947 Nobel Prize in Literature)

Andre Gide was a French writer and moralist popular for his fiction and autobiographical works. He was a controversial figure and his life and views on moral, political and religious matters were better known than his literary works. As a young man emerging from the Mallarme circle of Symbolist poets, he wrote majorly for a small, discerning group of initiates. He presented to the public, the variance as well as the mergence between the two sides of his own personality ripped apart by the education and the constricted level of ethics on which the society runs. He also portrayed social justice in much of his works. Gide’s literary works are inseparable from human’s life as they reveal man’s true form, the one which is usually hidden behind the societal mask. While confining himself to prose, he derived much life and form from its substance and expressed his underlying thoughts indirectly with artistic discretion. Gide is modern as well as contemporary in his approach, providing lucidity and discursiveness to his writings. His definitions of art are shrewd yet still relevant and they always remain intact, lively and permanent. In politics, he impeded pursuing communism after a veil was lifted up from his eyes on his visit to USSR in 1936. Stephen Fry
DID WE MISS SOMEONE?
CLICK HERE AND TELL US
WE'LL MAKE SURE
THEY'RE HERE A.S.A.P
Quick Facts

French Celebrities
Male Writers
French Writers
Sagittarius Writers
Sagittarius Men
Childhood & Early Life
He was born into a middle-class protestant family to a Law Professor at the University of Paris, Paul Gide and his wife Juliette Rondeaux. He received his early education at home before moving to the school.
At the age of 8, he enrolled in Ecole Alsacienne in Paris but his health conditions didn’t permit him to have a continual education. As a result, he was instructed by private tutors at home.
In 1880, his father left for heavenly abode and he was raised up by his mother who was devoutly concerned about him. He received tuition from his mother’s governess as well as private tutors.
Continue Reading Below
Career
In 1891, he published his novel, Les Cahiers d'Andre Walter (The Notebooks of Andre Walter). It was well received by his friend, Pierre Louys, a French novelist and poet, who introduced him to the works of Stephane Mallarme, a major French Symbolist poet.
In 1893 and 1893, he embarked on a journey to North Africa where he became acquainted with the life and practices of the Arab world which liberated him from the restrictive and pointless Victorian convictions at social and sexual levels. His growing awareness of his homosexuality made him accept the need to follow his own impulses and the open atmosphere that offered him the much-needed encouragement.
In 1895, he met Oscar Wilde and Lord Alfred Douglas, in Algiers, who became his close friends and further encouraged him to accept his homosexuality without any hint of guilt.
In early 1896, he was elected as a Mayor of a commune in Normandy, La Roque--Baignard and became the youngest Mayor ever. In the same year, he completed his book, ‘Fruits of the Earth’, which was published a year later but not well-received. By the end of the First World War it became one of his most influential works.
In 1918, he met Dorothy Bussy, an English novelist and translator, who was his long-time friend. She assisted him in translating his works to English, being originally in French.
In 1920's, he gained much popularity and highly influenced writers such as Guillaume Apollinaire, Albert Camus, and Jean-Paul Sartre as well as several young writers of that time.
During July 1926 to May 1927, he travelled extensively through the French Equatorial Africa colony going to Middle Congo, Oubangui-Chari, Chad and Cameroun before returning to France. He penned down his travelling experiences in the journals called, ‘Voyage au Congo’ (Travels in the Congo) and ‘Retour du Tchad’ (Return from Chad). At that time, his books had a big impact on anti-colonialism movements in France.
In 1930s, he embraced communism for a brief period but his ideologies and perception regarding it received a severe blow when he was invited on a Soviet Union tour as a guest of the ‘Soviet Union of Writers’. He criticized communism in his book ‘Retour de L’U.R.S.S’ in 1936. He also contributed an essay in ‘The God That Failed’, a book which collected testimonies of several famous ex-communist writers and journalists.
In 1942, he left for Africa and resided in Tunis until the end of the Second World War. He wrote ‘Theseus’ there whose story showcased his realization of the value of the past.
Continue Reading Below
Major Works
In 1908, he founded a literary magazine, ‘La Nouvelle Revue Francaise’ (The New French Review) along with Jacques Copeau and Jean Sclumber.
In 1923, he published a book on Fyodor Dostoyevsky, a Russian novelist, short-story writer and essayist. In the following year, with the publication of ‘Corydon’, he was greatly condemned. The book was based on homosexuality in which he defended pederasty.
In 1924, he published his autobiography, ‘Si le grain ne meurt’ (Unless the seed dies). It was based on those themes which obsessed him throughout his career and imbued his famous classical novels, ‘The Immoralist’ and ‘The Counterfeiters’.
Awards & Achievements
In June 1947, he was honored by the University of Oxford which conferred on him the ‘Doctor of Letters’, a higher doctorate degree for his outstanding achievement and original contribution to the writing.
In November 1947, he received the ‘Nobel Prize in Literature’ for his comprehensive and artistically significant writings in which human psyche were portrayed with keen psychological insight.
Personal Life
In 1895, he married his cousin Madaleine Rondeaux but the marriage was an unconsummated one due to his dissimilar sexual orientation. She died in 1938 and thereafter became the subject of his book ‘Et Nunc Manet in Te’.
In 1916, he began a relationship with 15 year old boy, Marc Allegret., who was the son of the best man at his wedding, Elie Allegret. He adopted Marc and fled to London along with him.
In 1923, he fathered a daughter with a much younger Elisabeth van Rysselberghe who was the daughter of his closest female friend Maria Monnom. He christened his daughter Catherine.
Trivia
His works were placed on the ‘Index Librorum Prohibitorum’ (Index of Forbidden Books) by Roman Catholic Church in 1952.

See the events in life of Andre Gide in Chronological Order 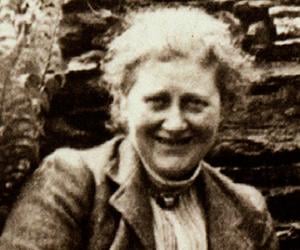