Richard Rodgers was a celebrated composer, especially known for his collaborations with Lorenz Hart and Oscar Hammerstein II. A born musician, he started picking up melodies by ear and began playing piano by the age of three. He composed the music for his first show at the age of fourteen. Later, he entered Columbia University, where he met Harts and began to collaborate with him, forming a partnership that lasted for more than two decades. However, it was not until he was twenty-three that they could taste real success, eventually becoming one of the most celebrated songwriter-composer duos, writing music for numerous successful musicals and films until Hart’s untimely illness and death. Thereafter, Richard Rogers began working with Oscar Hammerstein II, giving many hits such as Oklahoma!, South Pacific, and The Sound of Music. Today, he is remembered not only for his beautiful melodies, but also for his contribution to the American musical theater. Taylor Swift
Composers #215
Lyricists & Songwriters #945
Writers #724
DID WE MISS SOMEONE?
CLICK HERE AND TELL US
WE'LL MAKE SURE
THEY'RE HERE A.S.A.P
Quick Facts

Richard Rodgers was born on June 28, 1902 in Queens, New York City. His father, Dr. William Abraham Rodgers, was a successful physician while his mother, Mamie Rodgers (nee Levy), was a well-trained amateur musician. Both his parents were Russian Jew, who immigrated to the USA in 1860s.

Born younger of his parents’ two children, he had one brother, Mortimer, senior to him by four years. As their parents had moved in with the Levys directly after their honeymoon, both the children were born and raised in the extended family, having a normal, but not happy childhood.

There was constant friction between William Rodgers and his dominating mother-in-law, which more often than not led to bickering, yelling and then an uneasy silence. Luckily for young Richard, music became a way of escape.

His parents often attended Broadway musical productions and brought home their scores. His father would then sing the songs while his mother accompanied him on the piano. Very soon Richard started imitating his mother.

At the age of six, he started learning the piano and by nine he was spending all his spare time at the instrument, writing scores himself. Very soon, his maternal grandparents too started taking him to the operas.

He began his schooling at Public School 10, where his music teacher, Elsa Katz, was an inspiration for him, encouraging him to play at school functions. In time, he entered the prestigious Townsend Harris Hall; but soon shifted to De Witt Clinton High School, from where he graduated in 1919. 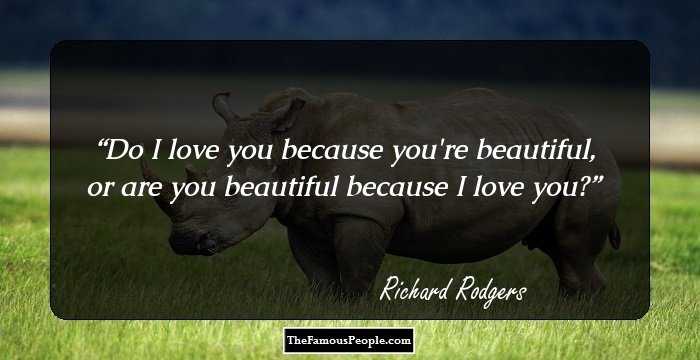 Quotes: You, Love, Beautiful, I
Continue Reading Below
You May Like

During his school years, Richard Rodgers attended numerous summer camps. In one such camp in 1916, he wrote Campfire Days, his first complete song. In the following year, he got the opportunity to write the music for his first show.

His brother, Mortimer, was then studying at Columbia University. He and his friends had decided to raise money to buy cigarettes for American troops. Although the lyrics were ready nobody was musically inclined and so Richard was recruited to write the tunes.

The show, One Minute Please, gave one performance at the Grand Ballroom of the Plaza Hotel on December 29, 1917.  It must have been a success for we soon find him working on his second benefit show, Up Stage and Down, which was staged on March 8, 1919.

In 1919, Richard Rodgers entered Columbia University, where he met the budding lyricist, Lorenz Milton Hart. Quickly, they decided to collaborate, making their professional debut with Any Old Place with You, featured in Lew Fields’ musical comedy, A Lonely Romeo.

Continuing to work together, Rodger and Hart collaborated on two more Columbia Varsity Shows, concurrently working with Fields, collaborating on his 1920 musical comedy, Poor Little Ritz Girl.  In 1921, Rodgers toured with Lew Fields, Fred Allen and Nora Bayes, conducting the orchestra for them.

In 1921, he left Columbia University to ender the Institute of Musical Art (now the Juilliard School), where he devoted himself to his musical studies, especially composition, till June 1923.  All along, he continued to collaborate with Hart, writing music for several amateur shows. 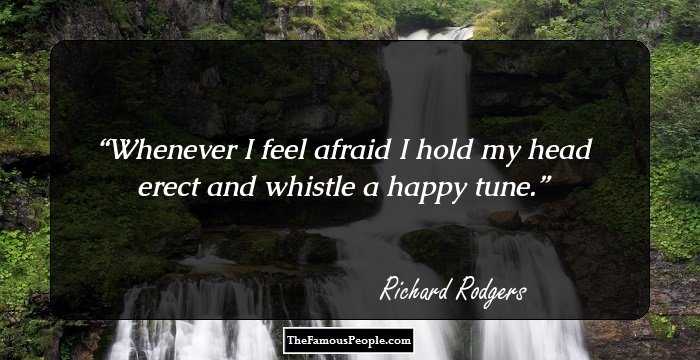 Quotes: I
Career with Hart

On graduating from Institute of Musical Art, Richard Rodgers continued to work with Lew Fields, concurrently collaborating with Hart to write The Melody Man in 1924. However, real success eluded them and Rodgers started mulling on the idea of giving up his musical career to become a children’s underwear salesman.

While he was pondering about an alternate career, the Theatre Guild asked Rodger and Hart to write the songs for another benefit show, a musical revue called The Garrick Gaieties. Based on contemporary subjects like the New York City Subway system and the Theatre Guild, it finally launched them in their career.

On May 17, 1925, The Garrick Gaieties opened on Broadway at the Garrick Theatre as a two-performance show. But the reviews were so great that the production was continued. It gave 211 performances from June 8 to November 28.  One of its songs, Manhattan, went on to become a part of the Great American Songbook.

In 1925, they had another big success with Dearest Enemy, which was followed in 1926 by The Gir Ffriend, Peggy-Ann and Betsy. Also in 1926, they made an eponymous sequel to The Garrick Gaieties. A third sequel of the same revue was made in 1930.

Among their songs that went on to become all-time hits were My Heart Stood Still (from their 1927 London production One Dam Thing after Another), With a Song in My Heart (from Spring is Here), Dancing on the Ceiling (from Ever Green), Here in My Arms (from Dearest Enemy), The Blue Room (from Girl Friend) etc.

Sometime in early 1930s, they moved to Hollywood, where they started writing music for several films including Love Me Tonight (1932).  Among its songs, Isn't It Romantic and Lover became great hits, with the former entering the Great American Songbook.

In 1935, they returned to Broadway, writing eleven songs for Billy Rose's musical, Jumbo, among which The Most Beautiful Girl in the World reached the Billboard Top 40 charts in 1952-53.   Other important works of the decade include Babes in Arms (1937), The Boys from Syracuse (1938) and Pal Joey (1940).

By early 1940s, Lorenz Hart had sunk into an emotional turmoil and alcoholism, prompting Richard Rodgers to look for new partner. He found it in Oscar Hammerstein II and began to work together on an adaptation of Lynn Riggs’s play Green Grow the Lilacs in 1942.  The result was award winning musical, Oklahoma!. .

After the death of Hammerstein, Rodger continued to work, sometime alone and at other times with other lyricists like Stephen Sondheim, Martin Charnin and Sheldon Harnick. He composed his last musical, I Remember Mama (1979) on Charnin’s lyrics. 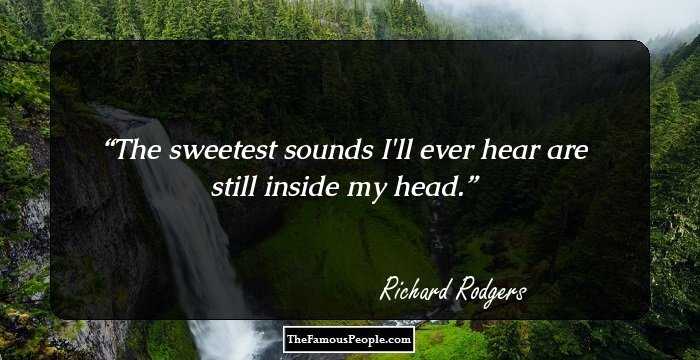 Richard Rodgers is probably best remembered for his score in The Sound of Music, a musical based on the 1949 memoir of Maria von Trapp. Most of its songs including Edelweiss, My Favorite Things, Climb Ev'ry Mountain, Do-Re-Mi, and The Sound of Music, have now become part of the standard repertoire.

The couple had two surviving daughters. Among them, Mary Rodgers was an author and composer, who wrote the music for the award-winning musical, Once Upon a Mattress. Another daughter Linda had a brief career as a songwriter. Adam Guettel and Peter Melnick, his two grandsons from his two daughters also became successful composer.

In 1990, the 46th Street Theatre was renamed the Richard Rodgers Theatre in his memory.

See the events in life of Richard Rodgers in Chronological Order