Amiri Baraka was an African-American writer, essayist, playwright and music critic, known for his abstruse writing style which has often been difficult for the readers to comprehend. His poems and essays mostly reflected the social issues concerning African-Americans and he was also famous as the founder of the ‘Black Arts Movement’. His writings encompassed African-American music viz. Jazz and Blues and their history. His political standpoint changed several times as he went from being a part of the avant-garde ‘Beat Generation’, to being a Black Nationalist. His prolific career was also marred with several controversies, especially owing to his anti-Semitic poems and articles. He was also known for his upfront views and blunt comments on political matters like national oppression and racism. Apart from writing, he was also hailed for his social commitment and was bestowed with several prestigious literary awards and honors. Baraka had also taught at several universities and had played a powerful role in defining ‘Black Literature’ thereby inspiring countless others. Along with James Baldwin, Baraka was also one of the most published Black writers of his generation. Alice Walker
Poets #161
Essayists #69
Writers #1185
DID WE MISS SOMEONE?
CLICK HERE AND TELL US
WE'LL MAKE SURE
THEY'RE HERE A.S.A.P
Quick Facts

American Celebrities
Poets
Black Poets
Essayists
Black Writers
Childhood & Early Life
Amiri Baraka, earlier known as Everett LeRoi Jones, was born in Newark, New Jersey to Coyt Leverette Jones, a postal supervisor and Anna Lois, a social worker.
In 1951, he went to Rutgers University on a scholarship but moved to Howard University in 1952. He later graduated from Howard University (c.1954) and served the U.S. Air force from 1954-1957.
In 1957, after leaving the Air force, he moved to Manhattan where he joined the avant-garde ‘Beat Generation’, a group of American writers who shot to fame during the 1950s for their unconventional writing style.
It was after moving to Greenwich Village in Manhattan, that his passion for jazz aroused, which later led him to pursue a parallel career as a music critic.
He has also studied philosophy at Columbia University and attended the ‘New School for Social Research’ without obtaining a degree. 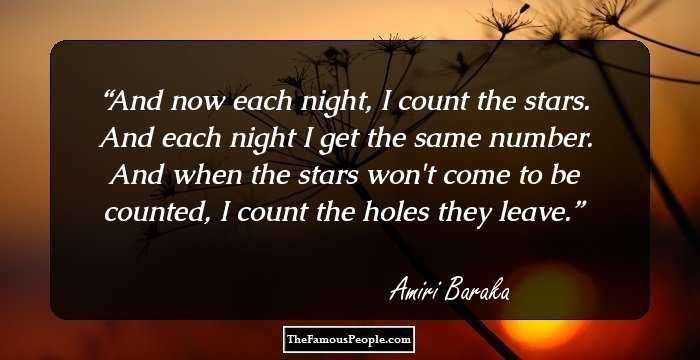 Famous Beautiful Women With Green Eyes
Career
In 1958, after marrying Hettie Cohen, the co-founder of ‘Yugen’, a literary magazine, he became the magazine’s editor. Later, they founded the ‘Totem Press’ that went on to publish works of famous ‘Beat writers’ like Allen Ginsberg and Jack Kerouac.
In 1961, his first volume of poetry, ‘Preface to a Twenty-Volume Suicide Note’ got published.
From 1961-1963, he worked alongside Diane Di Prima as an editor of ‘The Floating Bear’, a literary newsletter. During this period, he also joined the ‘Umbra Poets Workshop’, a group of African-American writers from Manhattan.
In 1963, his criticisms on African-American music, ‘Blues People: Negro Music in White America’, was published.
From 1963-1965, he taught creative writing at the Columbia University. During this time, he became a playwright and came to limelight with the production of the highly-acclaimed and controversial play, ‘Dutchman’. Ever since, he has written several plays like ‘The Slave-1964’ and ‘The Death of Malcolm X-1969’.
In 1965, after the assassination of Malcolm X, an African-American human rights activist, he became sceptical about the ‘white community’ and consequently left the ‘white Beat movement’ and Greenwich Village.
In 1965, after moving to Harlem, he founded the ‘Black Arts Repertory Theatre’, where the members used their plays to attack the prevalent racism.
In 1967, he worked as a visiting professor at the San Francisco State College and a year later published ‘Black Music’, a collection of his criticisms on music, which were previously published in various magazines.
In the early 1970s, he wrote numerous poems and articles that were viewed by critics as anti-Jewish.
Continue Reading Below
In 1974, he embraced Communism, believing that the declining economic condition was the root cause of various problems faced by the American society.
In 1979, he became a lecturer in Africana Studies at Stony Brook University.In 1984, his autobiography, ‘The Autobiography of LeRoi Jones/Amiri Baraka’ was published. 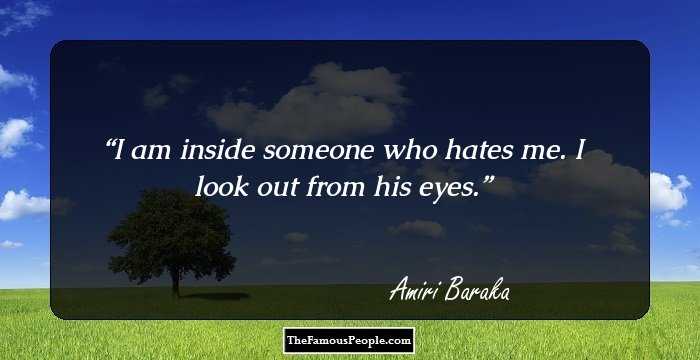 Quotes: Me, I
Major Works
‘Dutchman’ is a highly controversial yet critically-acclaimed play, written at a time when Baraka embraced ‘Black Nationalism’, a group that advocated ‘separatism’ for the African-Americans. This play narrates the story of a chance-meeting of a white woman with a black man on a subway. On March 24, 1964, it was staged at the Cherry Lane Theatre in New York and was adapted into a film in 1967.
Awards & Achievements
In 1964, his play, ‘Dutchman’ won the ‘Obie Award’ or ‘Off-Broadway Theatre Award’ for the ‘Best Off-Broadway play’.
In 1989, he was awarded the ‘American Book Award’ for his literary works.
In 1999, he was honored as the ‘Poet Laureate of New Jersey’.
He is the recipient of several fellowships from prominent institutions like ‘the Guggenheim Fellowship-1965’, ‘Rockefeller Foundation Award for Drama’ and National Endowment for the Arts.
He also received the ‘Before Columbus Foundation’ Lifetime Achievement Award.In 2002, he was included in the list of ‘100 Greatest African-Americans’. 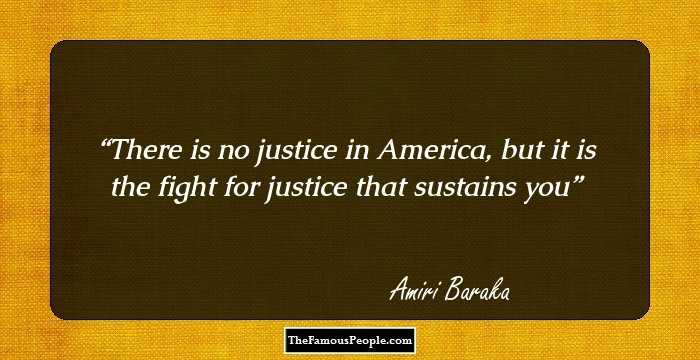 Quotes: You
Personal Life & Legacy
In 1958, he married a Jewish woman, Hettie Roberta Cohen and the couple had to two children. They got divorced after he left for Harlem, following the assassination of Malcolm-X.
In 1966, he met his second wife, Sylvia Robinson, a black woman who changed her name to Bibi Amina Baraka. The couple got married in same year and remained together till his death in 2014.
He died on January 9, 2014 due to complications from a recent surgery.
Trivia
This prolific African-American author has appeared in several documentary films like ‘Black Candle’ and ‘Motherland’.
You May Like

Quotes By Amiri Baraka | Quote Of The Day | Top 100 Quotes

See the events in life of Amiri Baraka in Chronological Order 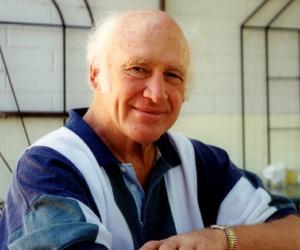