(Actress Who Rose to Fame With Her Role in Films: 'Mean Girls' and 'Mamma Mia!')

Amanda Seyfried is an American actress, known for her roles in movies like ‘Mean Girls’ and ‘Jennifer's Body.’ Starting her career as a model when she was just 11, she eventually branched out into acting when she was a teenager. Starting with minor roles in TV series, she made her big screen debut as ‘Karen Smith’ in the teen comedy film ‘Mean Girls.’ This role brought her mainstream fame and established her as an actor in the American film industry. She is also well-known for her portrayal of ‘Lilly Kane’ in the TV series ‘Veronica Mars.’ Though renowned for her beauty and sex appeal, Amanda refuses to be typecast as just another pretty face. The talented and ambitious actor loves challenging herself by taking up a variety of roles that force her to move out of her comfort zone. These roles also provide her an opportunity to develop her acting skills. She has done comedies, horrors, dramas, erotic thrillers, and romantic movies among other genres. She has never failed to impress the audience with her impeccable performances. In addition to being an actor, she is also a singer. She has contributed to the soundtracks of some of her movies. Amanda Seyfried was born on December 3, 1985, in Allentown, Pennsylvania, USA, to Ann and Jack Seyfried. Her mother is an occupational therapist, while her father is a pharmacist. She has an older sister named Jennifer.

She went to ‘William Allen High School.’ She began her modelling and acting career when she was still in school. She was just 11 when she became a model. Soon after, she started working for the clothing brand ‘The Limited Too.’ Also interested in acting and singing, Seyfried began studying opera under a voice coach.

Amanda Seyfried received her first acting gig at the age of 15 and appeared as ‘Lucinda Marie “Lucy” Montgomery’ on the soap opera ‘As the World Turns’ (1999-2001).

Due to her modeling and acting assignments, she had to miss classes at school. Despite her busy schedule, she managed to graduate from high school in 2003.

Amanda Seyfried stopped modeling to focus on her acting career. After playing a few minor roles in some TV series, she was cast as ‘Karen Smith,’ a dim-witted girl, in the teen movie ‘Mean Girls’ (2004). The film was a box office hit and increased Amanda’s popularity.

She then auditioned to play the title character in the TV series ‘Veronica Mars.’ Though she didn’t land the role, she was eventually cast as the title character’s best friend ‘Lilly Kane.’ She played this role in 11 episodes from 2004 to 2006.

Around this time, she also ventured into cinema and played supporting roles in movies like ‘Nine Lives’ (2005) and ‘American Gun’ (2005). In 2006, she appeared in five episodes of the TV series ‘Wildfire.’

With her acting career on a roll, Amanda Seyfried appeared in numerous films in the late-2000s. Among her major film projects were ‘Mamma Mia!’ (2008) where she played ‘Sophie.’ In 2009, she appeared in ‘Jennifer's Body’ in which she played ‘Anita.’

In 2010, she acted in the romantic drama-war film ‘Dear John’ which was an adaptation of Nicholas Sparks' 2006 novel of the same name. The film became a commercial hit even though it received negative reviews from critics.

Being a talented singer, Amanda Seyfried has also contributed to the soundtracks of several films, such as ‘Mamma Mia!’ and ‘Dear John.’

Amanda Seyfried was part of the ensemble cast that appeared in the western comedy film ‘A Million Ways to Die in the West.’ The film, which was a moderate success, starred actors like Charlize Theron, Neil Patrick Harris, Giovanni Ribisi, Sarah Silverman, and Liam Neeson.

She co-starred with Mark Wahlberg and Seth MacFarlane in the 2015 comedy film ‘Ted 2,’ in which she played ‘Samantha Jackson,’ a lawyer addicted to marijuana. Even though the film was panned by the critics, it became a huge commercial success, grossing more than $216 million at the box office.

Amanda Seyfried was then seen opposite Ethan Hawk in the critically acclaimed 2017 movie ‘First Reformed.’ The movie performed moderately at the box-office, and was screened at the 74th ‘Venice International Film Festival.’ The same year, she was also seen in ‘The Last Word.’

In 2018, she starred alongside an ensemble cast, including Meryl Streep, Brosnan, and Christine Baranski in the jukebox musical romantic comedy film ‘Mamma Mia! Here We Go Again.’ It was both a critical and commercial success, earning a whopping $395 million against a budget of $75 million.

In 2019, she appeared in the comedy-drama film ‘The Art of Racing in the Rain’.

In 2020, Amanda Seyfried was seen in the horror film ‘You Should Have Left’ and the biographical film ‘Mank’. Her performance in the ‘Mank’ was highly appreciated and she was nominated for the Golden Globe Award and Academy Award for Best Supporting Actress for her performance.

Major Works
Amanda Seyfried’s portrayal of ‘Samantha’ in the drama film ‘Nine Lives’ earned her much appreciation. She won a few awards for playing a distraught teenager who is torn between her non-communicative parents.
She played ‘Cosette,’ an illegitimate daughter of a prostitute, in the drama film ‘Les Misérables.’ Her poignant portrayal of an emotionally troubled girl struck a chord with the audience. The film became a major commercial as well as critical hit.
Awards & Achievements

In 2010, Amanda Seyfried won the ‘ShoWest Breakthrough Female Star of the Year.’ The same year, she received the ‘MTV Movie Award’ for ‘Best Scared-As-S**t Performance’ for her role in ‘Jennifer’s Body.’

Amanda Seyfried was romantically linked to actor James Franco. She dated actor Justin Long from 2013 to 2015. After breaking up with Long, she began a relationship with actor Thomas Sadoski in early 2016. The couple got engaged on September 2016, and got married in a private ceremony on March 2017; Amanda was pregnant at the time. Shortly after, she gave birth to their daughter. In September 2020, the couple was blessed with a son.

See the events in life of Amanda Seyfried in Chronological Order 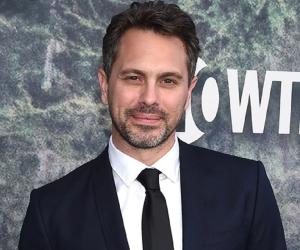