Neil Patrick Harris is an American actor, writer, producer, singer, and magician. He was bitten by the acting bug early in his life. Without procrastinating his desire to act, he started his acting career right after graduating from school. He landed a role in the movie ‘Clara’s Heart’ after being spotted by playwright Mark Medoff. His brilliant acting skills earned him numerous other roles in several films and TV series. He became a household name in the US when he played the title role in ‘ABC’ network’s ‘Doogie Howser, M.D.’ Subsequently, he was bombarded with offers to play prominent roles in numerous films and television series. He was seen acting in ‘The Next Best Thing,’ ‘Undercover Brother,’ and ‘Starship Troopers.’ Apart from establishing himself as a television and film actor, Harris also became a successful theatre artist, appearing in numerous Broadway stage plays and musicals. Over the course of his career, he has tried his hand at direction. He has also voiced several characters in various animated films. Thanks to his exceptional acting skills and talent, he was awarded a star on the ‘Hollywood Walk of Fame’ on September 2011. American People
American Men
New Mexico Actors
Tall Celebrities
Tall Male Celebrities
Childhood & Early Life
Neil Patrick Harris was born on June 15, 1973, in Albuquerque, New Mexico, USA, to Sheila and Ron Harris. He was raised in Ruidoso, New Mexico.
He attended ‘La Cueva High School’ in Albuquerque where he developed interest in acting and films. He was an active participant in plays and musicals. He played ‘Toto’ in the school production of ‘Wizard of Oz.’
He graduated in 1991 with an honors degree. 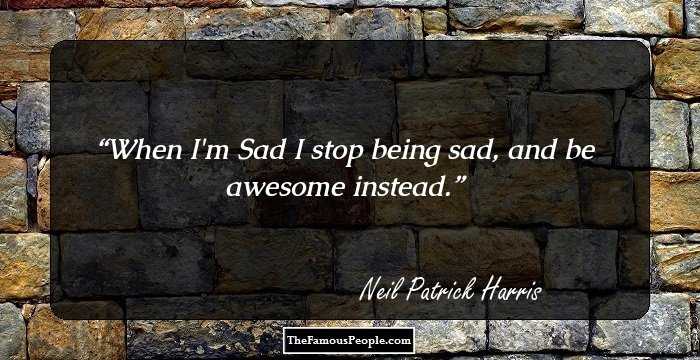 Famous Beautiful Women With Green Eyes
Career
His career started at the age of 15 when he was spotted by playwright Mark Medoff who offered him a role in the movie adaptation of the novel ‘Clara’s Heart.’ His performance in the movie earned him a ‘Golden Globe’ nomination.
After an impressive start to his career, he was featured in a children fantasy tale titled ‘Purple People Eater’ which released in 1988.
His career continued to flourish as he landed the lead role in ABC’s ‘Doogie Howser, M.D.’ The show was a major hit and cemented his place in the industry. It also made him famous among TV viewers.
Running for four seasons, ‘Doogie Howser, M.D’ earned him two ‘Golden Globe’ nominations. Following the success of ‘Doogie Howser, M.D,’ he was offered a number of roles in several television series.
His first major film as an adult was the 1995 thriller drama ‘Animal Room’ in which he played a teenager. Subsequently, he was seen in movies, such as ‘The Next Best Thing,’ ‘Undercover Brother,’ and ‘Starship Troopers.’
Though he became successful as a film actor, he did not give up on television. From 1999 to 2000, he was seen alongside Tony Shalhoub in the ‘NBC’ sitcom ‘Stark Raving Mad.’
He also appeared in made-for-television films, such as ‘Snowbound: The Jim and Jennifer Stolpa Story,’ ‘My Antonia,’ ‘The Christmas Wish,’ ‘Joan of Arc,’ ‘The Wedding Dress,’ and ‘The Christmas Blessing.’
He also explored stage acting, appearing in Broadway musicals. His first ever tryst with stage acting was in the year 1997 when he played ‘Mark Cohen’ in a rock musical titled ‘Rent.’ In 2001, he played ‘Tobias Ragg’ in the popular musical ‘Sweeney Todd: The Demon Barber of Fleet Street.’
The following year, he performed alongside Anne Heche in ‘Proof.’ In 2003, he became part of the famous musical ‘Cabaret,’ and shared the stage with the likes of Deborah Gibson and Tom Bosley. It was his top-notch performance that earned him critical acclaim.
Continue Reading Below
The same year, he appeared on the big screen, playing a fictionalized version of himself in ‘Harold & Kumar Go to White Castle.’ He went on to reprise his role in the film’s sequels, ‘Harold & Kumar Escape from Guantanamo Bay’ (2008) and ‘A Very Harold & Kumar 3D Christmas’ (2011).
In 2005, he was seen playing the role of ‘Barney Stinson,’ a womanizer, in the ‘CBS’ sitcom ‘How I Met Your Mother.’ He continued to play the character till 2014. He earned a nomination at the 2008 ‘Primetime Emmy Awards’ for ‘Outstanding Supporting Actor in a Comedy Series.’
In 2009, the musical episode of ‘Batman: The Brave and the Bold’ was premiered. In the episode, he was seen playing the villainous character of ‘Music Meister.’ His character required him to sing and he recorded many songs while playing the role.
In 2010, he voiced ‘Dick Grayson’ in the animated film ‘Batman: Under the Red Hood.’ He also voiced ‘Lou’ in the film ‘Cats & Dogs: The Revenge of Kitty Galore.’ The same year, he played the role of the protagonist in the comedy film ‘The Best and the Brightest.’
In 2010, he directed the rock musical ‘Rent’ at the ‘Hollywood Bowl.’ The following year, he was the lead actor in Stephen Sondheim's stage show ‘Company.’ In 2011, he also directed ‘The Expert at the Card Table’ at ‘Broad Stage's Edye’ in California.
The same year, he was cast to play ‘Patrick Winslow’ in the computer-animated comedy film ‘The Smurfs.’ He went on to reprise his role as ‘Patrick Winslow’ in the film’s sequel ‘The Smurf 2.’
In 2013, he voiced ‘Steve the Monkey’ in ‘Cloudy with a Chance of Meatballs 2.’ The following year, he appeared in films, such as ‘A Million Ways to Die in the West’ and ‘Gone Girl.’
In 2015, he was the host as well as the executive producer of the live television variety series ‘Best Time Ever with Neil Patrick Harris.’
Neil was cast in the television adaptation of ‘A Series of Unfortunate Events,’ which was aired from 2017 to 2019
Continue Reading Below 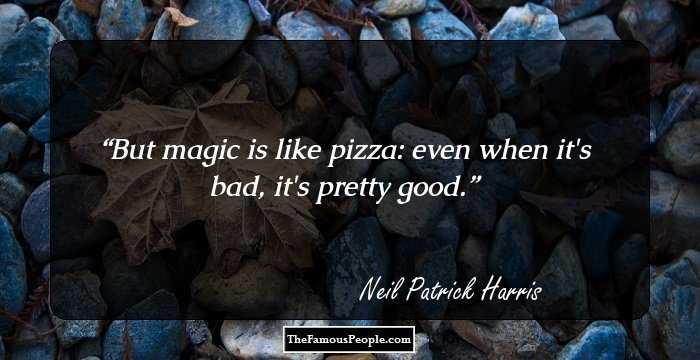 Quotes: Like
Awards & Achievements
For his exceptional acting skills, he has been felicitated with numerous awards and honors, including ‘Young Artists Award,’ ‘People’s Choice Award,’ ‘Bravo A List Award,’ ‘Streamy Award,’ ‘Golden Icon Award,’ and ‘Spike Video Game Award.’
He has won the prestigious ‘Emmy Award’ thrice, twice under the category of ‘Outstanding Special Class Program’ and once for ‘Outstanding Guest Actor in a Comedy Series.’
In 2010, he was named among the ‘100 most influential people’ by ‘Time’ magazine. The following year, he received a star on the ‘Hollywood Walk of Fame.’
Personal Life & Legacy
On November 2006, he discussed his sexual orientation and came out as gay.
In 2004, he started a relationship with David Burtka. In 2010, he announced of having twin children via surrogacy; the couple has a son named Gideon Scott and a daughter named Harper Grace. Neil and David got married on September 8, 2014. 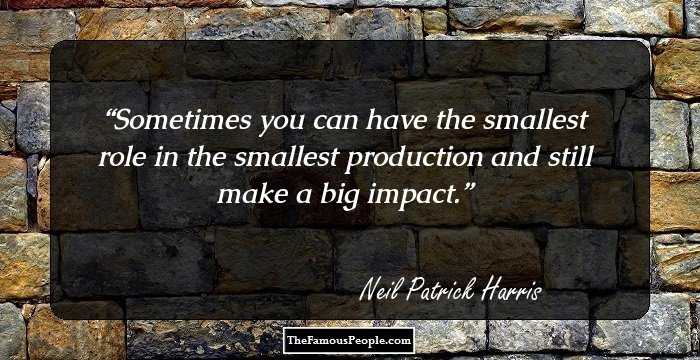 Quotes: You
Trivia
This actor of ‘How I Met Your Mother’ fame is an avid drinker of ‘Red Bull.’ In fact, ‘Red Bull’ has gifted him a lifetime supply of the drink along with a mini refrigerator.