Among the various contributions he has made to the world, Albrecht von Haller is most renowned for his observations related to the nervous system and respiratory process. He did not belong to a well-to-do family and even lost his parents at an early age. However, he had an innate understanding of languages and in his childhood he made a compilation of several biographies. He later decided to pursue a career as a physician and travelled to several places gaining knowledge on medicine from different exponents in the profession. One of his mentors was the renowned physician Herman Boerhaave who guided him during his days at the university. He also cultivated an interest in the subject of botany and starting from collection of different species of flowers, he went on to be a renowned botanist of the eighteenth century. He also had a knack for poetry and even when he carried on his research works in botany, he penned much poetry revolving around diverse themes. He was one among the superlative anatomists that the world had known, and is credited with heralding the era of modern day neurology and physiology. One of the most prominent observations made by him was the autonomous function of the heart. Read on to know about other valuable contributions which Haller has made to natural science.
Continue Reading Below Swiss People
Physiologists
Swiss Men
Male Botanists
Male Scientists
Childhood & Early Life
Albrecht von Haller was born to Niklaus Emanuel Haller and Anna Maria Engel, on 16th October, 1708, in Bern, Switzerland. He had five siblings and after the death of his mother, his father remarried Salome Neuhaus.
He was initially taught by a former pastor and later attended a school in Bern. Albrecht frequently suffered from illness and as a result could not participate in outdoor activities much. He developed an interest for languages and had innate talent in the discipline, and dabbled with languages such as Hebrew, Greek and Chaldee.
He had also created a compilation of about two thousand biographies of notable historical figure, in his early childhood.
During the time 1722-23, he stayed at his step-uncle’s house in Beil. His uncle Johann Rudolf Neuhaus was a physician and gave Albrecht lessons in philosophy, and various other subjects. However, he was not interested in philosophy, and determined to embark on a career as a physician. He also wrote poetry during the same time.
In December 1723, he enrolled at the ‘University of Tübingen’ where he studied medicine under the tutelage of Johann Duvernoy and Elias Rudolph Camerarius Jr.
In 1725, he joined the ‘Leiden University’ and had the opportunity to be under the guidance of renowned and remarkable people like Boerhaave and Albinus.
In 1727, he completed his graduation from the university by defending his thesis before a reviewing academic committee, that the salivary duct was only a blood-vessel and nothing else.
He travelled to London, where he was introduced to physicians and scientists such as James Douglas, Sir Hans Sloane, John Prijgle and William Chesselden among many other notable scientists.
He then went to Paris and pursued studies with Jacob Winslow and Henri François Le Dran as his teachers.
He moved to Basel in 1728, and carried on further studies under the tutelage of John Bernoulli in mathematics. Albrecht was drawn towards the subject of botany during this time and while he travelled through places like Baden, Savoy and some of the Cantons of Switzerland, he collected different plant species which later became the elementary part of his work involving flora of Switzerland. 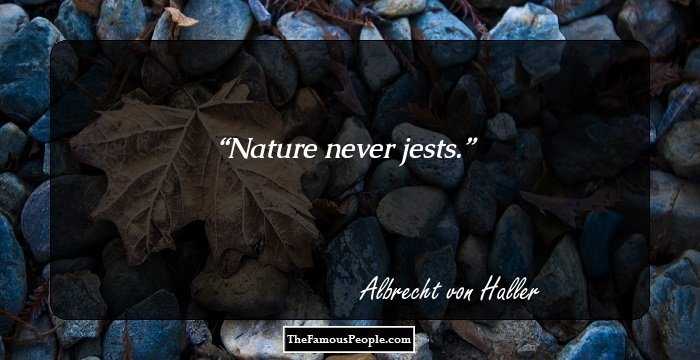 Quotes: Nature, Never
Continue Reading Below
You May Like

The Sexiest Men Of 2020, Ranked
Career
Von Haller was also engaged in literary pursuits during the same time and penned the poem ‘Die Alpen’ in 1729, which was based on his journey through the mountainous region of Alps. The same year, he travelled back to Bern and was engaged in the profession of a physician in the city.
In 1732, his book ‘Gedichte’ was published and the poem ‘Die Alpen’ was first printed in this book.
In 1736, he moved to Germany and joined the ‘University of Göttingen’ as the chairperson of the botany, medicine, surgery and anatomy department of the institute.
In 1743, this eminent physician was made a Fellow of the Royal Society. During his stay at Göttingen, he was included in the cantonal council of Bern.
Albrecht was inducted into the ‘Royal Swedish Academy of Sciences’ in 1747 as a foreign member, and two years later, he was promoted to a noble rank.
In 1753, he resigned from his post of chairman at the ‘University of Göttingen’ and relocated to his hometown Bern. There he was elected to the office of Rathausammann, and was engaged in political affairs of the region. During the same time he also carried on his botanical research work as well as penned poetry.
In 1755, his book ‘Onomatologia medica completa’ was published which was co-written by Johann Peter Eberhard.
He penned the book ‘Historia stirpium indigenarum Helvetiae inchoata’ in 1768, and this was followed by the publication of his book ‘Ode sur les Alpes’.
In between 1771-72, he inked his work on botany named ‘Bibliotheca botanica’ and his researches and observations mentioned in this book, hold good till date.
During the period 1771-74, the philosophical works which he wrote include ‘Usong’, Alfred’ and ‘Fabius and Cato’, and in these he discusses despotism, aristocratic republican and limited monarchy.
His book ‘Bibliotheca anatomica qua scripta ad anatomen et physiologiam’, which appeared in two volumes was published between the years 1774-77.
Major Works
This anatomist has made many contributions to the world but one of his most important works is his observation of the activities of the muscle as well as the nervous system. These observations by this learned physiologist, led to the foundation of modern day neurology.
Haller is also credited with observing and understanding the respiratory process and the independent functioning of the heart.
Personal Life & Legacy
He married thrice and was the father of eight children. Two of his sons named Gottlieb Emanuel and Albrecht, also embarked on a career as a botanist.
By 1773, his health started deteriorating and he took to opium in order to relieve himself of suffering. The use of this drug, apparently, brought him an early death than his illness.
On 12th December, 1777, this exceptional anatomist breathed his last in Bern. His works ‘Materia medica oder Geschichte der Arzneyen des Pflanzenreichs’ and ‘Histoire des Plantes suisses ou Matiere médicale et de l'Usage économique des Plantes par M. Alb. de Haller ... Traduit du Latin’ were published posthumously.
Trivia
The botanist Carl Linnaeus has named a shrub as ‘Halleria’ in the honour of Albrecht von Haller.
You May Like