(One of the Founders of the Modern American Mafia and Co-founder of 'Murder, Inc' Crime Group)

Advanced Search
Albert Anastasia was an Italian–American gangster, hitman, and crime lord, who once controlled the organized crime industry in the US. Regarded as one of the deadliest criminals of all time in the US, he co-founded the modern American mafia. Anastasia was the leader of the modern Gambino crime family. According to former ‘New York City Police Department’ (NYPD) detective Ralph Salerno, Anastasia had murdered tens of thousands of people while he was ruling the mafia circuit. Anastasia entered the US illegally in 1919, which marked his beginning in the world of crime. He acquired powerful connections and eventually became the boss of one of the five crime families of New York City. The jealousy of a rival gangster and the betrayal of his associates resulted in his much-hyped assassination in the barbershop of the 'Park Sheraton Hotel.' Giuseppe Zangara
26th February In History
DID WE MISS SOMEONE?
CLICK HERE AND TELL US
WE'LL MAKE SURE
THEY'RE HERE A.S.A.P
Quick Facts 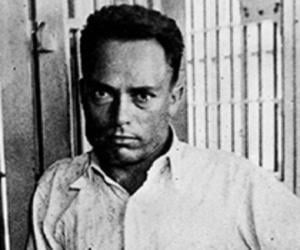 See the events in life of Albert Anastasia in Chronological Order