Agnes de Mille was a famous American dancer and choreographer who took a long and successful but eventful journey in the domain of theatre and ballet areana. She was known for the turbulent journey, which she embarked in the world of theatre. She introduced ballet form to musical comedy. It was she who utilized dance to enhance the plot of the story. Films like ‘Oklahoma!, and musicals like ‘Bloomer Girl’, ‘Brigadoon’, ‘Carouse’l and ‘Paint Your Wagon’ are the proof of her innovativeness in this regard. She choreographed around 15 musicals and 21 ballets. She was an important figure of new American realism that combined ballet techniques, vernacular movement and modern psychology. She did not receive success in Hollywood as her only successful film was ‘Oklahoma!’. Her works namely, ‘The Art of Ballet’ and ‘The Art of Choreography’ were broadcasted on television in 1956. Both of them attracted public attention for their attempts to represent serious dance. She also authored several books, which included ‘Reprieve’, ‘America Dances’ and so on. She was the recipient of several prestigious awards for her outstanding contribution in the field of dance and choreography. American Celebrities
American Women
Female Dancers
American Dancers
Female Choreographers
Childhood & Early Life
Born in New York, Agnes was the daughter of William Churchill de Mille, a famous playwright and Hollywood director. Her mother was Anna George. Her uncle Cecil B. de Mille was also a Hollywood director.
She wanted to become an actress but later turned her attention to dancing. As dancing in that era was not considered as a suitable career option, so her parents did not allowed her to dance.
She did her schooling in California at the small private Hollywood School for Girls. Later, she studied at the University of California at Los Angeles (UCLA) from where she completed her graduation. 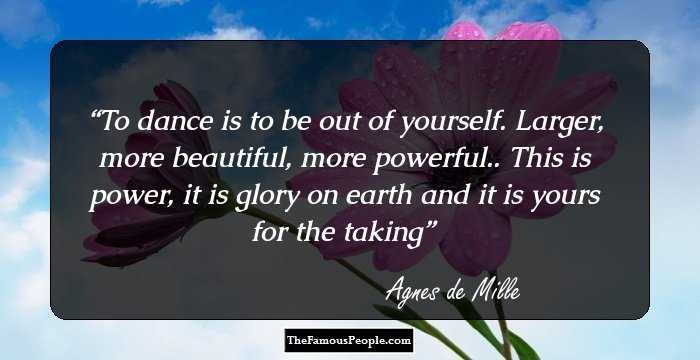 Quotes: Yourself, Beautiful, Power
Continue Reading Below
You May Like

The Best Black Actresses Of All Time
Career
As she could not find employment in theatres, she composed dances for herself, arranged the music, designed the costumes and also gave a series of solo dance recitals.
In 1933, she shifted to London where she studied with Dame Marie Rambert and joined Rambert’s company, namely, The Ballet Club. Next year, she choreographed the film ‘Cleopatra’, but unfortunately the dances were cut from the film later.
During one of her journeys back to United States, Miss De Mille decided to choreograph the dance of ‘Romeo and Juliet’, which starred Norma Shearer and Leslie Howard. The dance piece was beautiful and brought great deal of critical attention to Agnes.
In November 1938, she returned to United States and toured the entire country along with Joseph Anthony, a renowned stage director and Sybil Shearer, a popular dancer.
In 1940, De Mille became the charter member of a ballet theater for whom she created her inaugural ballet, ‘Black Ritual’. The ballet included black dancers, the first in the history of a ballet company.
In 1941, she created ‘Three Virgins and A Devil’ which became a tremendous hit and was highly appreciated both by the critics as well as the audiences.
In 1942, De Mille created a ballet for the ballet Russe de Monte Carlo. The ballet became a huge hit. On October 16, 1943, she herself danced for the leading role at the Metropolitan Opera House, which earned her a standing ovation.
De Mille’s another huge success was ‘Brigadoon’, which was followed by ‘Allegro’, in which she acted as the stage director as well as choreographer. She was the first dancer who attempted to play these roles simultaneously. De Mille also did ‘The Rape of Lucretia’, of which she was the stage director.
In 1953, she choreographed the film ‘Oklahoma!’ , that cost more than a million dollars. But, she never considered this film as a first rate film.
Continue Reading Below
For her gift of the gab, President Kennedy appointed her as a member of the National Advisory Committee on the Arts. President Johnson also appointed her as a member of the National Council of this organization.
In 1974, she inaugurated the Agnes de Mille Heritage Dance Theatre at the North Carolina School of the Arts in Winston-Salem. This company used to conduct cross-country tours.
She also served as a member of the Board of Directors of the Society of Stage Directors and Choreographers. She was the president of this organization for several years. 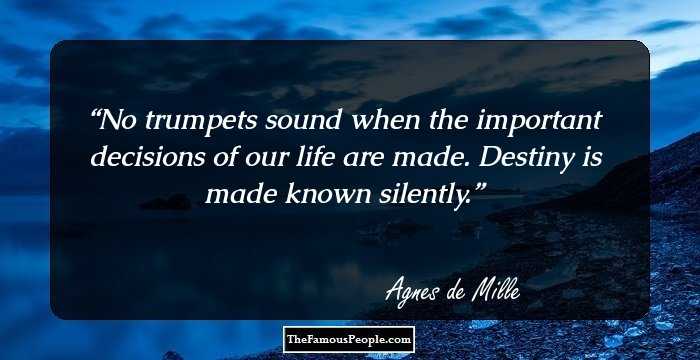 Quotes: Life
Major Works
Her first significant work on ballet was ‘Rodeo’ in 1942. It included tap dancing and movements that remind American West. The score of ‘Rodeo’ was composed by Aaron Copland. This work of Agnes brought her critical acclaim.
Awards & Achievements
She received two American Theatre Wing ‘Tony’ Awards for her contribution in ‘Brigadoon and Kwamina’.
In 1987, she became the recipient of an ‘Emmy’ for her work ‘Agnes, The Indomitable de Mille’. 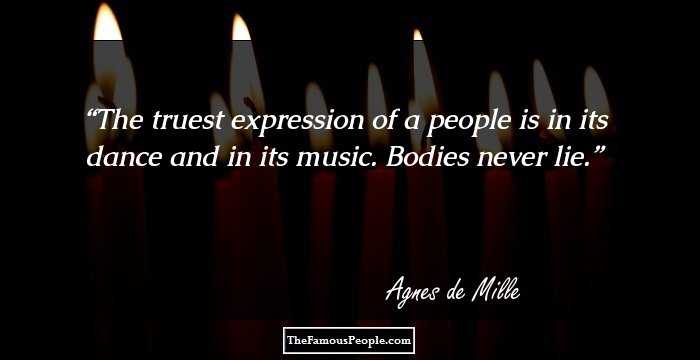 Quotes: Never, Music
Personal Life & Legacy
She married Walter Foy Prude, a Texan on June 14, 1943. They had a son namely Jonathan de Mille Prude who was born in 1946.
In 1993, at the age of 88, she died of a second stroke in her Greenwich Village apartment. At the time of her death, she was still an influential figure in the cultural field of her country.
Trivia
Initially she was interested in pursuing a career in acting, but, she was told that she was ‘not pretty enough;’ hence she turned her attention towards dancing.
During her performance as stage director and choreographer for ‘Allegro’, she used to keep people busy at the same time in three theaters, one for the actors, one for the dancers and one for the singers.
You May Like