Aaron Copland was one of the most appreciated American classical composers of the twentieth century. He innovatively blended popular forms of American music such as jazz and folk into his compositions to create exceptional pieces. Copland had contributed a lot to the music industry — both as a composer and as a speaker, who made the Americans aware about the importance of music. Through his compositions, polemics, promotions and plain hard work, Copland established American concert music. He had a distinct American style of composition and was often referred to as the “Dean of American Composers”. Incorporating elements of jazz and serial techniques, Copland wrote ballets, orchestral music, chamber music, vocal works, operas and film scores. This talented musician was a boon to the American music industry as he travelled to elevate the status of American music abroad. His commitment to music and the country made him one of the most prominent and remembered composers — not only a good but also a great composer indeed.
Continue Reading Below

American Celebrities
Composers
Educators
American Men
New Yorkers Musicians
Childhood & Early Life
Aaron Copland was born to a conservative Jewish family of Lithuanian origin on 14 November 1900, in Brooklyn, New York. His parents were Harris Morris Copland and Sarah Mittenthal Copland. Among their five children, Aaron was the youngest one.
Their original family name was ‘Kaplan.’ His father had changed it earlier due to certain reasons, though Aaron himself was unaware of the fact for a long time.
Unlike his father who was not interested in music at all, his mother liked to sing as well as play the piano, and she arranged musical classes for the children too. Among his siblings, his older brother Ralph was the most talented in music, having become proficient with the violin at a very young age. It was Aaron’s sister Laurine, who was the closest to him among all his siblings. She supported and encouraged him in his career.
At the early age of eight, Copland started writing songs, and at the age of eleven, he composed his first notated music for an opera scenario. Later, he studied under Leopold Wolfsohn for a period of four years.
Later, he studied under Rubin Goldmark in Manhattan and also attended classical music performances. He then continued his studies in Fontainebleau in France, where he was taught by the famous French musician Nadia Boulange. Her broad taste in music had a deep influence on him. 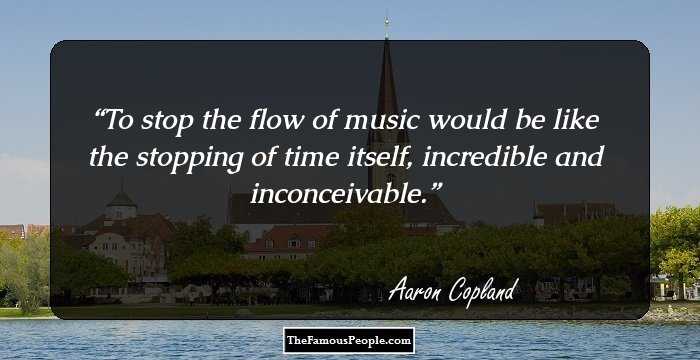 The Hottest Male Celebrities With The Best Abs
Career
After studying under many reputed European composers abroad, Aaron Copland came back to the US. His debut work ‘Symphony for Organ and Orchestra’ was released on January 11, 1925.
Later on he was drawn to jazz and popular music, genres which he had explored previously as well while he was in Europe. Several of his works, including ‘Four Piano Blues’ had a Jazz influence.
As an author he wrote the first edition of ‘What to Listen for in Music.’ In the book, which was published in 1939, he gives the reader a proper guidance on the appreciation of music. He also wrote and published ‘Our New Music’ and ‘Music and Imagination’ in 1941 and 1952 respectively.
Aaron Copland spent his time in other countries during the Great Depression years. He went to Europe, Africa, and then to Mexico as well, where he got acquainted with the Mexican composer Carlos Chavez. He composed several musical works using Mexican folk music as well, such as ‘El Salon Mexico.’
He is also remembered for composing film scores. The films he worked on include ‘Mice and Men’ (1939), ‘Our Town’ (1940), and the ‘North Star’ (1943). He also worked on ‘The Heiress’ in 1949 for which he was awarded an Oscar.
His later works included the use of the twelve-tone system of Aaron Schonberg, though he didn’t fully embrace it. He was also inspired by the French composer Pierre Boulex, who showed him various other ways to use this technique. Copland often used twelve-tone techniques in the later part of his career. But he went back and forth in using it instead of sticking it to it exclusively, as it was not well received by most people. Among such works are ‘Piano Fantasy’ (1957) and ‘Connotations’ (1962).
During his career, he also assisted hundreds of young composers who admired his talent in music. However, the young musicians he taught were his students only for brief periods. He advised his students to focus on expression rather than on technical points. He also encouraged them to have their own personal style.
From around 1970, he decided to stop composing and focus more on teaching instead. 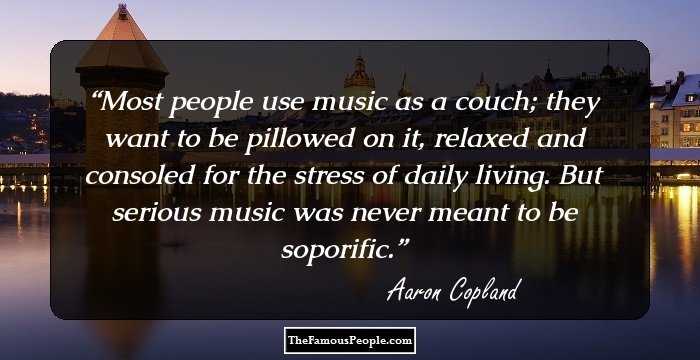 Quotes: Never, Music, Living
Continue Reading Below
Major Works
‘The Piano Variations’ of Copland, which were written for piano solo, was dedicated to Gerald Sykes, a renewed American writer. The musical performance, which lasts for around 11 minutes, was first published in 1932 by Cos Cob press.
Another significant work his was ‘El Salon Mexico.’ It was composed during one of his visits to Mexico using pure Mexican folk music. The work, which comprises three different musical styles, depicts an imaginary dance hall in Mexico City. Copland had started working on it from 1932, and completed it in 1936.
His ‘Connotations’, which was a musical composition for symphony orchestra was another major work. However upon its premier it was received negatively by many; some critics considered Copland’s use of serial techniques quite detrimental to his music. But others saw it only as a proof of his growth and unique inventiveness.
One of his most popular works was ‘Rodeo’ which was premiered in 1942. It was a ballet consisting of five sections: ‘Buckaroo Holiday’, ‘Corral Nocturne’, ‘Ranch House Party’, ‘Saturday Night Waltz’, and ‘Hoe-Down.’ Considered as one of the earliest examples of a true American ballet, ‘Rodeo’ can be regarded the combination of Broadway music with a classical ballet.
‘Symphony No. 3’ which was Aaron Copland’s third and final symphony, is among one of his significant works. It was premiered on October 19, 1946, by the Boston Symphony Orchestra under Serge Koussevitzy. It was written at the end of the Second World War, and it is regarded as the essential American symphony as it fuses Copland’s distinct ‘Americana’ style with the form of the symphony.
‘The Tender Land’ an opera with music was another one of Aaron Copland’s works. The work was premiered at the New York City Opera on 1 April 1954. It was initially poorly received, due to which Copland decided to make revisions.
Awards & Achievements
For his music in the film ‘The Heiress’ (1949), Aaron Copland was awarded the Academy Award for Original Music Score.
In 1964, President Lyndon Johnson awarded him the Presidential Medal of Freedom.
Aaron Copland was awarded the prestigious ‘University of Pennsylvania Glee Club’ award in 1970 because of the immense influence he had on American music.
Copland was awarded Yale University's Sanford Medal.
Copland was the honorary member of the Alpha Epsilon chapter of Phi Mu Alpha Sinfonia in 1961 and was awarded the fraternity's Charles E. Lutton Man of Music Award in 1970.
Copland was honored with the National Medal of Arts in 1986.
The United States Congress awarded Copland with a special Congressional Gold Medal in 1987. 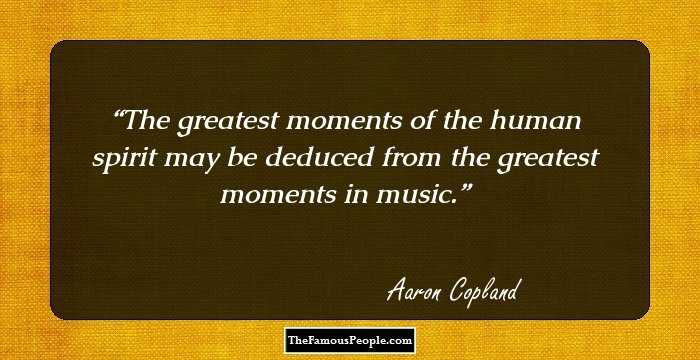 Quotes: Music
Personal Life & Legacy
Aaron Copland never married and remained a bachelor throughout his life. It is believed that he was gay and had love affairs with several men including Victor Kraft, artist Alvin Ross, pianist Paul Moor, and dancer Erik Johns.
He passed away on December 2, 1990 due to respiratory failure and Alzheimer’s disease.

Quotes By Aaron Copland | Quote Of The Day | Top 100 Quotes

See the events in life of Aaron Copland in Chronological Order