DID WE MISS SOMEONE?
CLICK HERE AND TELL US
WE'LL MAKE SURE
THEY'RE HERE A.S.A.P
Popularity Index
00
Poets #1517
Writers #6581
Quick Facts

Quotes By A. R. Ammons Poets

Multiple award winning American poet Archie Randolph Ammons, better known as A. R. Ammons, was famous for his works describing the wonders of nature and humanity’s complex and often unfortunate interactions with the natural elements. He was considered a major poet in the history of American literature, and this was a fact that continued to amaze him for long. For he never wrote to gain fame or fortune, he wrote only for the love of poetry. Yet his poems were so moving and thought provoking that fame and recognition became inevitable. As a poet he never felt the need to adhere to any set genre even though his writings were greatly influenced by those of the great poet Ralph Waldo Emerson who himself never followed any set tradition. Ammons loved to write from a young age and his works reflected his experiences of growing up in a cotton and tobacco farm as a youngster. Even though he was highly talented, success did not come easily to him. The very first book he wrote sold only 16 copies over a period of five years! It took him ten more years and a lot of struggles before he could taste success. Literary critics today consider him to be one of the greatest nature poets in American history. American Men
University Of California, Berkeley
Male Poets
Male Writers
Childhood & Early Life
He was born to Willie and Lucy Della McKee Ammons in North Carolina. Throughout his childhood he remained at the same place, growing up in a cotton and tobacco farm. He was one of the three surviving children of his parents.
He attended Whiteville High School from where he graduated in 1943. 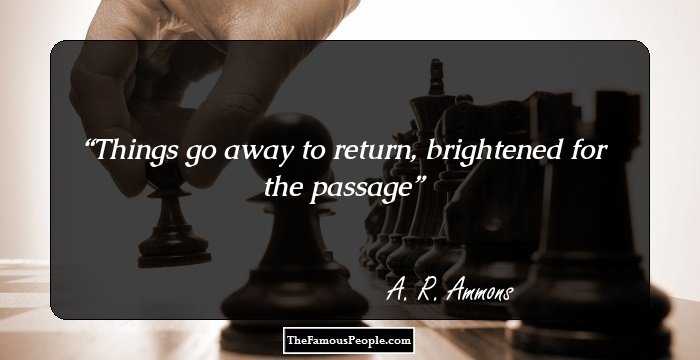 Aquarius Poets
American Poets
Aquarius Writers
American Writers
Career
He served as a Navy destroyer stationed on board the U.S.S. Gunason during World War II and it was at this time that he started writing poetry. He continued his education after the war and enrolled at the Wake Forest University with a major in biology and graduated in 1949.
Following his graduation he pursued an M.A. in English from the University of California. After that he accepted a position working as a teacher and principal at Hattaras Elementary School.
He published his first book of poetry, ‘Ommateum’ in 1955, using his own money to fund the publication. It definitely was not a dream debut for him—his book sold only 16 copies over the next five years.
He joined the faculty of Cornell University in 1964 where he would serve for the rest of his career. He eventually became Goldwin Smith Professor of English and Poet in Residence and retired in 1998.
He published another collection of poems, ‘Expressions of Sea Level’ in 1964 in which he had presented the sea as having a form yet being formless, as being permanent yet impermanent. This book became very popular and he was catapulted to fame almost overnight.
He was starting to gain in popularity by the late 1960s and thus he published a collection of his poems in a book form. ‘Collected Poems, 1951-1971’ was out in 1972. The poems in this collection paint a vivid picture of the poetic style in which he described nature and humanity.
The poem ‘Tape for the Turn of the Year’ was published in 1972. The poem was experimental in nature as Ammons had recorded the poem without revision on a long roll of adding-machine paper.
In 1974 his poem ‘Sphere’ was out. The poem reflects his originality and refusal to adhere to any set standards of poetry. Throughout the long poem, he had used the colon as an all-purpose punctuation mark, even in place of the period. He also made unconventional usage of upper and lower case alphabets.
As a poet he adopted a very unconventional style of writing. While some of his poems were quite lengthy others were very short, sometimes covering just two or three lines. His book ‘A Coast of Trees’, 1981, was a collection of shorter poems, some of which are counted to be among his best works.
Continue Reading Below
In ‘Sumerian Vistas’, published in 1988 he developed the theme of transcendental unity by exploring the beginning and closure, time and flux, the personal and the non personal, and the holy and the profane.
One of his most famous poems was ‘Garbage’ (1993) in which he writes about ideality, and explores the idea that all forms of life—not just of human beings alone—is a part of an ultimate reality.
His 1996 work, ‘Brink Road’, a collection of over 150 poems, is primarily about nature. The poems vividly describe natural phenomena through short, unrhymed stanzas. His long poem ‘Glare’, written in 1997 was the poet’s final work. 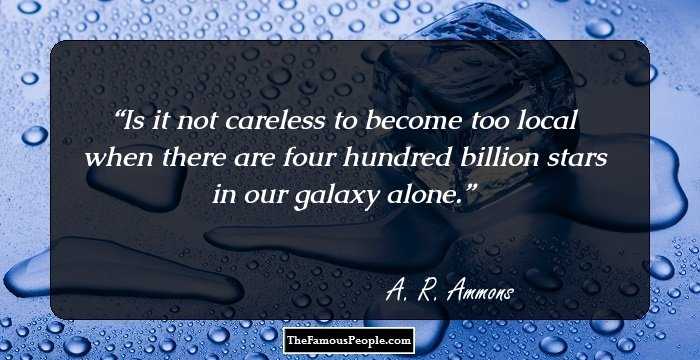 Aquarius Men
Major Works
The book ‘Sphere’ is considered his masterpiece. In this work the sphere in question is the earth itself and the poet writes about various topics ranging from galaxies to gas stations. Widely regarded as his best work, the book won much critical acclaim.
Awards & Achievements
The Bollingen Prize for Poetry in recognition of the best book of new verse was presented to him in 1975 for the poem ‘Sphere’.
He won the prestigious U.S. National Book Award twice—in 1973 for ‘Collected Poems, 1951-1971’ and in 1993 for ‘Garbage’. 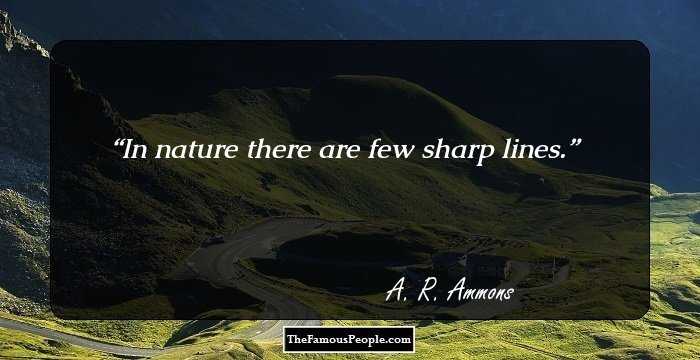 Quotes: Nature
Personal Life & Legacy
He met Phyllis at Wake Forest where she was a Spanish teacher and married her in 1949. The couple remained happily married till Ammons’s death.
He died of cancer in 2001, at the age of 75.
You May Like

See the events in life of A. R. Ammons in Chronological Order