Zachary Levi is a popular American actor and singer, best known for his portrayal of Chuck Bartowski in the famous TV series ‘Chuck.’ He is also famous for playing the title role in ‘Shazam!,’ as a part of the ‘DC Extended Universe.’ Levi has played important roles in several films, television films, and series. Among them, the most prominent ones that brought him fame and recognition were ‘Alvin and the Chipmunks: The Squeakquel,’ ‘Tangled,’ ‘Thor: The Dark World,’ ‘Big Shot: Confessions of a Campus Bookie,’ ‘Less than Perfect,’ and ‘Chuck.’ He starred as Georg Nowack in the 2016 Broadway revival of ‘She Loves Me’ opposite Laura Benanti, for which he received a ‘Tony Award’ nomination. He was awarded the ‘Kids’ Choice Awards’ for the movie ‘Alvin and the Chipmunks.’ He is also recognized as a singer and has sung songs like ‘I See the Light’ and ‘I’ve Got a Dream.’ While both the songs were featured in the movie ‘Tangled,’ the former was sung along with Mandy Moore. Levi’s handsome and muscular physique has grabbed the attention of many celebrity reporters and fans. He was one of ‘TV’s sexiest men’ as ranked by ‘Buddy TV’ in 2011. American People
Louisiana Actors
Tall Celebrities
Tall Male Celebrities
Libra Actors
Childhood & Early Life
Zachary Levi Pugh was born on September 29, 1980, in Lake Charles, Louisiana, United States, to Susan Marie and Darrell Pugh.
He has an elder and a younger sister. Levi is of Welsh descent. He lived in several states during his childhood before his family settled in Ventura, California.
Levi began acting on stage when he was just six years old. After he graduated from ‘Buena High School,’ he went on to pursue his dream in Los Angeles.
During his acting school days, he started performing lead roles in regional productions, such as ‘Grease,’ ‘The Outsiders,’ ‘Oklahoma,’ ‘Oliver,’ ‘The Wizard of Oz,’ and ‘Big River’ at ‘Ojai Art Center.’
Levi was advised to use his middle name as his stage name for some political reasons. 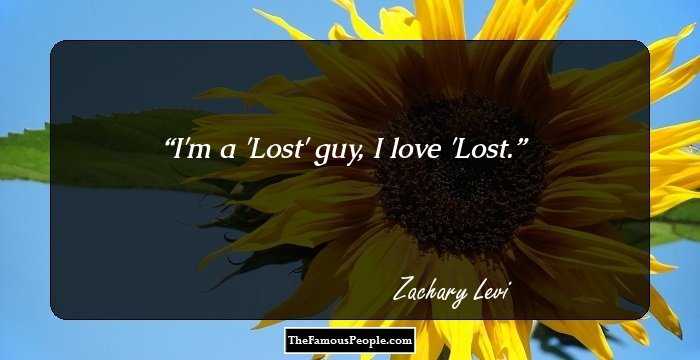 The Most Popular US Veterans
Career
Levi’s acting career started with the 2002 ‘FX’ television movie, ‘Big Shot: Confessions of a Campus Bookie,’ in which he played Adam. Afterwards, he was featured as Grant Asher in the television film ‘See Jane Date.’
In the same year, he was cast in the television series, ‘Less than Perfect,’ in which he played the lead role of Kipp Steadman. He appeared in a total of 81 episodes that were aired from 2002 to 2006.
In 2004, Levi was offered the lead role in a television series titled ‘Three,’ but unfortunately, the show was not aired.
Afterwards, he was featured in a bunch of movies that did not impress the audience. His career moved onto a successful path when he appeared as Chuck Bartowski in the 2007 television series ‘Chuck.’ He also directed few episodes of the series.
By the end of 2007, Levi had already made a name for himself in Hollywood. He then starred as the lead in the film ‘Alvin and the Chipmunks: The Squeakquel.’ In the next few years, Levi tried his hand at different fields like singing, narration, hosting, and entrepreneurship.
He took part as a voice-over artist and as a singer in the movie ‘Tangled,’ which released in 2010. By the end of the year, he began his own company, ‘The Nerd Machine.’ This is basically a website that hosts an event called ‘Nerd HQ’ every year.
In April 2010, Katharine McPhee released a preview of a music video for her single ‘Terrified.’ Levi appeared in the music video, singing along with McPhee.
In 2013, Levi made his Broadway debut with the musical comedy, ‘First Date.’ His next Broadway project was the 2016 Broadway revival titled, ‘She Loves Me’ where he played the leading role of George Nowack opposite Laura Benanti.
Levi was cast in the mini-series, ‘Tiny Commando.’ He then became a part of the cast of NBC's show ‘Heroes Reborn.’
Continue Reading Below
He also guest-starred as Abraham Lincoln in the ‘Hulu’ original series ‘Deadbeat.’
In 2018, Levi appeared as Dr. Benjamin Ettenberg in the second season of ‘The Marvelous Mrs. Maisel.’ Levi won the ‘Screen Actors Guild Award’ for ‘Outstanding Performance by an Ensemble in a Comedy Series’ at SAG’s January 2019 awards ceremony.
In 2019, Levi starred as Billy Batson (also known as Captain Marvel) in Warner Bros. Pictures' superhero comedy film ‘Shazam!’ 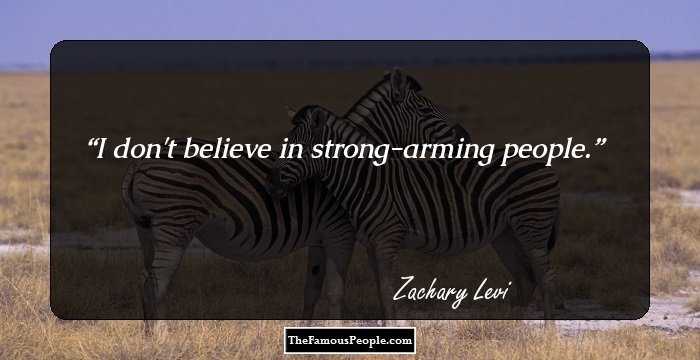 Quotes: Believe
Television Career
‘Less than Perfect’ – Levi rose to fame with this American television series. He played the character of Kipp Steadman, who is a snide. The series was broadcast first on October 1, 2002, and was received well by the audience as well as the critics.
‘Chuck’ – This was Levi’s next major television series, in which he played the role of a reluctant ‘CIA’ spy, which went on to become his most known television character till date. The series even helped him land quite a few roles in films. Produced by ‘Warner Brothers Television,’ the series was first aired on September 24, 2007, and became the most acclaimed series of the year.
‘Tangled’ – Levi voiced a character named Flynn Rider in this ‘Disney Channel’ television series. Afterwards, he also reprised his role as Rider in ‘Tangled Ever After.’ The series is based on the story of Rapunzel. The series aired its first episode on February 15, 2017.
Film Career
‘Big Momma's House 2’ – Levi starred in this comedy flick, in which he played a clumsy ‘FBI’ agent. The film released on January 27, 2006, but failed at the box office.
‘Alvin and the Chipmunks: The Squeakquel’ – This semi-animated comedy film is labeled as Levi’s first noted film. He played the lead character of Toby Seville, to whom the Chipmunks are handed over from David Seville, after David meets with an accident in the prequel. Produced by ‘20th Century Fox,’ the film hit the theatres on December 23, 2009, and received positive reviews.
Continue Reading Below
‘Thor: The Dark World’ – Levi replaced actor Josh Dallas in this superhero film series, based on the superhero comic character Thor. He played the character of Fandral, one of the three members of the ‘Warrior Squad.’ The film reached the audience on November 8, 2013, and was declared a smash hit.
He starred in the movie ‘Office Uprising’ which is an American horror comedy, directed by Lin Oeding and written by Peter Gamble Robinson and Ian Shorr.
He also starred in the movie ‘Shazam!’ which is a 2019 American superhero film based on the ‘DC Comics’ character of the same name. It was produced by ‘New Line Cinema’ and distributed by ‘Warner Bros.’ 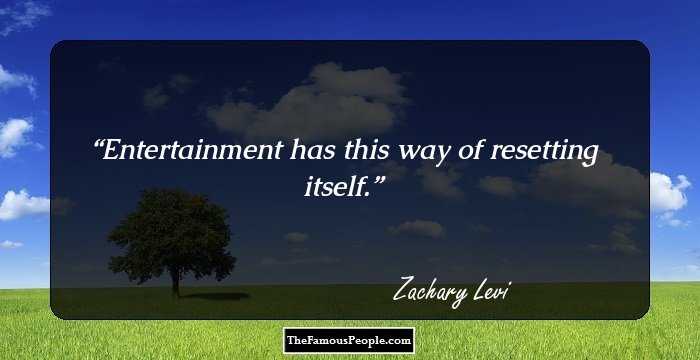 Awards
‘Ewwy Award’ (2009) – Levi received his first award for the series ‘Chuck’ under the category, ‘Best Leading Actor in a Comedy Series.’
‘Teen Choice Award’ (2010) – This award too was won for ‘Chuck’ under the category, ‘Popular Choice Action Hero.’
‘Theatre World Award’ (2013) – For his work in ‘First Date,’ he won the ‘Theatre World Award.’
‘Screen Actors Guild Award’ (2019) – This award was won for his work in ‘The Marvelous Mrs. Maisel’ under the category, ‘Outstanding Performance by an Ensemble in a Comedy Series.’
Personal Life
Levi was first rumored to have hooked up with singer Rachael Taylor in 2007. Later, he confirmed his relationship with singer and actress Caitlin Crosby. They both went around from January 2008 to January 2010.
After breaking up with Crosby, he married an actress and a retired fashion model named Missy Peregrym on 14 June 2014. Though they were happy together in the initial stages of their marital life, their marriage didn't last long as they filed for divorce in 2015.
Levi is a Christian by faith and is a strong believer in Christ.
Trivia
Levi fancies sports cars and motorcycles. He owns a 2009 Nissan GT-R and two motorbikes, namely Harley-Davidson FXDX and Ducati Monster 750CC.
He is a gamer and his all-time favorite game is ‘Super Mario Bros.’ He is also an avid poker player.
He has English, French, German, Irish, Welsh, Northern Irish, Scottish, and Swiss ancestry.

See the events in life of Zachary Levi in Chronological Order