Kimitake Hiraoka was a Japanese author, playwright, filmmaker, actor, and right-wing activist. He is better known by his pen name, Yukio Mishima. Widely regarded as one of the most important contributors to Japanese literature of the 20th century, he was in the selected group of authors who were considered for the Noble Prize in Literature in 1968 but lost it to compatriot and former mentor Yasunari Kawabata. Some of his most prominent works, such as novels ‘Confessions of a Mask’ and ‘The Temple of the Golden Pavilion’, the Noh play ‘The Lady Aoi’, and the autobiographical essay ‘Sun and Steel’, display an avant-garde blending of traditional and modern aesthetics that transcend beyond cultural boundaries. Mishima was a right-wing nationalist who ardently believed in Japanese traditional values and veneration of the emperor. He founded the Tatenokai, a nationalist militia. In 1970, he led four other members of the Tatenokai to an attempted coup d'état in a military base in Tokyo. They took the commandant hostage and Mishima tried to convince the soldiers there to join the coup. Unsuccessful, he committed ritual suicide by performing seppuku. Since his death, his failed coup has come to be known as the “Mishima Incident”.
Continue Reading Below Japanese Celebrities
Actors
Playwrights
Japanese Men
Male Poets
Childhood & Early Life
Born on January 14, 1925, in Shinjuku, Tokyo, Japan, Yukio Mishima was one of the three children of a government official named Azusa Hiraoka and his wife, Shizue. He had two younger siblings. His sister, Mitsuko, passed away from typhus at the age of 17 in 1945. His brother’s name was Chiyuki.
In the early years of his childhood, Mishima lived with his paternal grandmother, Natsuko (family register name: Natsu) Hiraoka, who took him from his immediate family and kept him with herself for a few years.
Despite marrying a bureaucrat who accumulated his wealth through the newly opened colonial frontier in the north (present-day Russia), Natsuko came from an aristocrat family and strove to maintain certain pretensions associated with the Japanese upper-class life.
Mishima’s upbringing had a profound effect on his literature and political beliefs. Natsuko often suffered violent and morbid outbursts, which were hinted in Mishima’s works.
According to some of his biographers, his grandmother was the reason for his later fascination with death. She did not let him play or socialize with other boys and even kept him away from the sunlight.
At the age of 12, Mishima finally returned to live with his parents. His father decided to raise his children in accordance with military discipline. They were severely punished for any misbehaviour. Azusa regularly went into the young boy’s room to look for any evidence of his love for literature and tore apart if he found any of his manuscripts.
Mishima began his education at the age of six at Gakushūin, the Peers' School in Tokyo, where he learned German, English, and French. He started to write stories when he was 12 years old.
While he was a voracious reader of traditional Japanese stories, he also developed an interest in European literature. His biggest childhood inspiration was poet Michizō Tachihara, whose writings made Mishima appreciate the classical Japanese poetry form of waka. In his early published works, waka poetry features prominently.
Some of Mishima’s teachers at Gakushūin originally came up with his pen name to save him from the ire of his fellow students. His first published short story was ‘Sorrel Flowers—Akihiko's Memory of the Early Childhood’ (1938).
By the time the World War II broke out, Mishima had already published several other short stories. His first completed play, ‘The Journey’, was not published during his lifetime.
Mishima did not have to fight in the war because a young army doctor misdiagnosed him with tuberculosis. He then completed his education, graduating from the University of Tokyo in 1947, and took a job in the finance ministry.
While a career in finance definitely held much promise for him, he wore himself out very quickly. Eventually, his father helped him resign from his post within a year of his employment. He subsequently became a full-time writer. 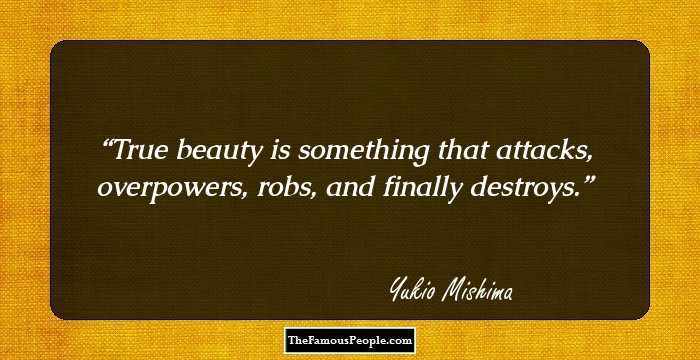 The Sexiest Men Of 2020, Ranked
Career
Yukio Mishima always had his mother’s support in his pursuit of a writing career. In fact, she was the first person to read his stories. After the war ended, he gradually became a prolific figure in the Japanese literary world.
He authored novels, essays, short stories, and serial novellas. He also wrote several highly acclaimed plays for the Kabuki theatre and modern versions of traditional Noh drama.
In 1948, his first novel, ‘Thieves’ was published. A tale revolving around two young aristocratic men descending towards suicide, the novel earned him a place among the Second Generation of Postwar Writers.
He published ‘Confessions of a Mask’ (1949), which is considered to be a semi-autobiographical account. The protagonist of the story, a young homosexual, has to hide his true character behind a mask to avoid being ostracized by the society.
Over the course of his career, Mishima penned about 50 plays, 25 short story books, 35 essay books, 34 novels, and one libretto. He also wrote the screenplay of a film. Mishima translated several European plays, including Racine's ‘Britannicus’ (1957) and Oscar Wilde’s ‘Salome’ (1960).
Mishima garnered international fame for his writings and had admirers in Europe and North America. The translations of several of his books were available across these continents. He would visit both continents on a regular basis.
Mishima was shortlisted for the Nobel Prize in Literature three different times. He came close to winning it in 1968, but the prize was eventually awarded to his countryman and one-time mentor Yasunari Kawabata. Mishima realised that the possibility of another Japanese writer winning the award in recent future was almost non-existent.
Mishima also did some modelling work and acted in a few films. He served as a model in ‘Ba-ra-kei: Ordeal by Roses’ by Eikoh Hosoe, ‘Young Samurai: Bodybuilders of Japan,’ and ‘Otoko: Photo Studies of the Young Japanese Male’ by Tamotsu Yatō.
He made his screen debut in the 1951 film ‘Junpaku no Yoru’. In 1960, he appeared in ‘Afraid to Die’, his first film that was released in the United States. He wrote the screenplay, co-directed, and starred in the 1966 short film ‘Patriotism’.
Continue Reading Below 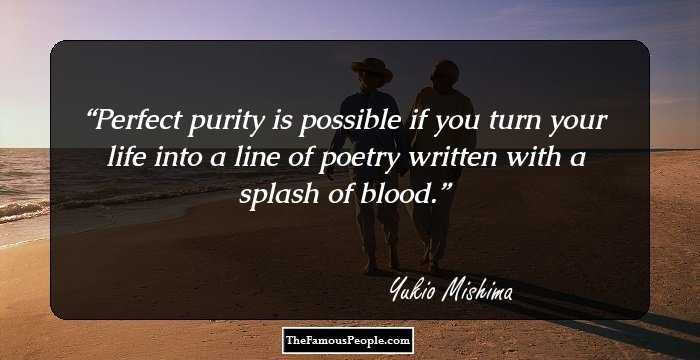 Quotes: You, Life
Major Works
'Haru no Yuki’ (Spring Snow) was the first book of Mishima’s ‘Sea of Fertility’ tetralogy. Released in book form in 1969, ‘Spring Snow’ is considered to be his magnum opus alongside the other three books in the series, ‘Runaway Horses’ (1969), ‘The Temple of Dawn’ (1970), and ‘The Decay of the Angel’ (1971).
The series spans from 1912 to 1975 and is told through the viewpoint of Shigekuni Honda, a law student in the first book and a rich, former judge in the last. Over the course of the series, he comes across several individuals whom he considers to be the reincarnations of his school friend, Kiyoaki Matsugae.
Awards
In 1956, Mishima won the Yomiuri Prize from Yomiuri Newspaper Co., for best novel for ‘The Temple of the Golden Pavilion’. He won the same prize again in 1961 for his drama ‘Toka no Kiku.’ 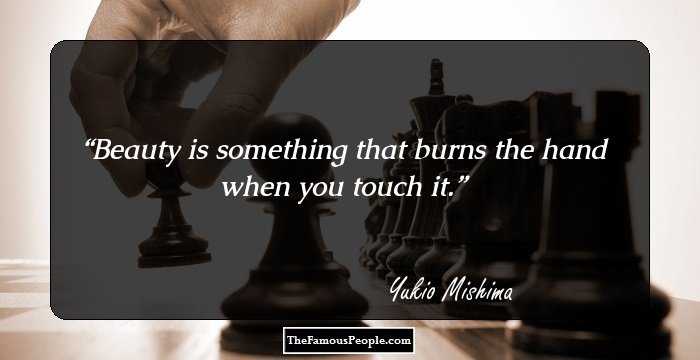 Quotes: You
Family & Personal Life
Yukio Mishima and his wife, Yoko Sugiyama, exchanged wedding vows on June 11, 1958, and went on to have two children together, daughter Noriko (born June 2, 1959) and son Iichiro ( May 2, 1962).
The speculation about his sexual orientation persisted throughout his career and even after his death. His widow vehemently denied that he was gay. However, Jiro Fukushima wrote that he and Mishima had a relationship in 1951.
Death & Legacy
In 1968, Mishima established the Tatenokai, a nationalist militia group that had the unusual permission to train with the Japan Self-Defense Forces. On November 25, 1970, he and four other members of Tatenokai got into the Ichigaya Camp, the Tokyo headquarters of the Eastern Command of the Japan Self-Defense Forces and took the commandant hostage.
He subsequently went out to the balcony and gave a speech to the soldiers gathered there, asking them to join the Tatenokai in their coup d'état to restore the emperor to his pre-Word War II powers.
He was unsuccessful in his attempt. The soldiers reacted to his speech by mocking him. He subsequently came back into the commandant’s office and performed seppuku. Much has been speculated about the manner of his death. Many believe that he knew that the coup would fail and it was only a pretext for him to commit ritual suicide.
Recommended Lists:
Writers #1392
Film & Theater Personalities #5112
You May Like

Quotes By Yukio Mishima | Quote Of The Day | Top 100 Quotes

See the events in life of Yukio Mishima in Chronological Order