Bill Hicks was an American stand-up comedian and social critic, one of the most influential artists of the twentieth century. He was considered as one of the masters of dark and observational comedy. He was drawn to comedy from an early age and performed in front of his friends at school. Later, he started performing at nightclubs and soon went to Los Angeles to pursue his career as a stand-up comedian. Much of his comedy acts involved direct attacks on mainstream society, religion, politics and consumerism. He was the sarcastic and satiric voice of society which altered people’s perception of events and made them see things from a different angle. He also got addicted to alcohol and drugs in his career but managed to overcome it, inspiring millions of people through his ingenious thinking and dark humoristic ideas. After his death, his body of work gained a significant measure of acclaim in creative circles, and he developed a substantial cult following. He was brutally honest in terms of describing the society. His famous philosophy on life, ‘It’s Just a Ride’, is a perfect reflection of his personality and continues to encourage his fans to live life with immense satisfaction, love and cheerfulness. American Celebrities
Stand-up Comedians
American Men
Tall Celebrities
Tall Male Celebrities
Childhood & Early Life
He was born on December 16, 1961 in Valdosta, Georgia to James Melvin ”Jim” Hicks, an executive at General Motors and Mary Hicks, a teacher. He was the youngest child of the family with two elder siblings, Steve and Lynn.
His family lived in Florida, Alabama, and New Jersey before settling in Houston, Texas; Bill was seven years old at that time. Later in his interviews, he often recalled his jokes on his family’s Southern Baptist beliefs in his childhood.
He was drawn to comedy in his early childhood and dreamt of becoming Woody Allen. Along with his friend, Dwight Slade, he used to write routines and perform in front of his family and friends.
At the age of 13, he was on stage in Houston nightclubs performing without the consent of his parents, who believed him to be in his room at night. By 1978, he had become a regular performing member of the Houston Comedy Workshop.
In his senior year of high school, Hicks's parents moved to Little Rock, Arkansas, but he stayed in Houston to finish high school. He moved to Los Angeles and embarked on a stand-up comedy career, shortly after his graduation in 1980.
From his early age, he was neither a spiritual person nor an atheist, though he believed in the existence of a supreme power, a one consciousness universe. 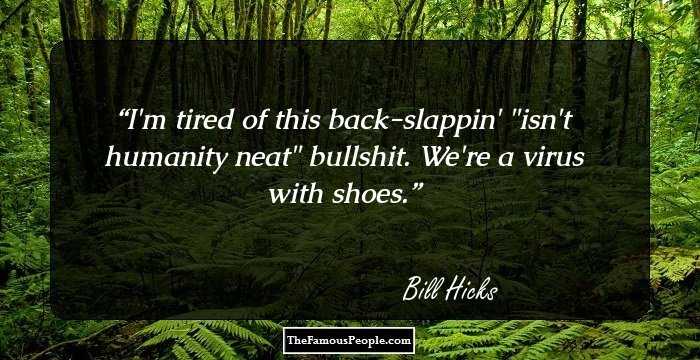 Continue Reading Below
Career
In Los Angeles, he quickly became a regular at the Comedy Store in Hollywood and was soon friends with Jerry Seinfeld, Jay Leno and Andrew Dice Clay.
In 1982, he formed a production company along with his friend, Kevin Booth, which later came to be known as ‘Sacred Cow’. But in 1983, his failed and unnoticed career in comedy pushed him towards alcohol and drug addiction.
In 1984, he appeared on the show ‘Late Night with David Letterman’ for the first time. His five minute stand-up and daredevil attitude won him admiration and further bookings. He went on to do 11 further broadcast shows, popularizing his image as an artist.
In 1987, an opportunity came in his life when Rodney Dangerfield offered him a chance to perform on ‘Young Comedians Special’, after watching one of the tapes of his previous shows. He moved to the New York City and went on to perform more than 250 times a year, for the next five years.
In 1988, when he realized the hazards and consequences of drugs, he quit it but got addicted to smoking, the worst kind of drug. But overcoming the drug addiction brought about the most successful phase of his career.
In 1989, he released his first video, ‘Sane Man’, which was a commercial hit.
In 1990, he released his first album, ‘Dangerous’, performed on the HBO special ‘One Night Stand’ and at ‘Just for Laughs’ festival which received glowing praise.
In 1991, he returned to ‘Just for Laughs’ and filmed his second video, ‘Relentless’.
In June 1993, while working on a chat show ‘Counts Of The Netherworld’ for Channel 4 in England, he was diagnosed with pancreatic cancer.
Continue Reading Below
In October 1993, he appeared for the last time on ‘Letterman Show’, but his entire performance was removed from the broadcast, because Letterman's producers believed the material was unsuitable for broadcast. Letterman finally aired the censored routine in its entirety on January 30, 2009.
On January 6, 1994, he performed the final show of his career in New York. 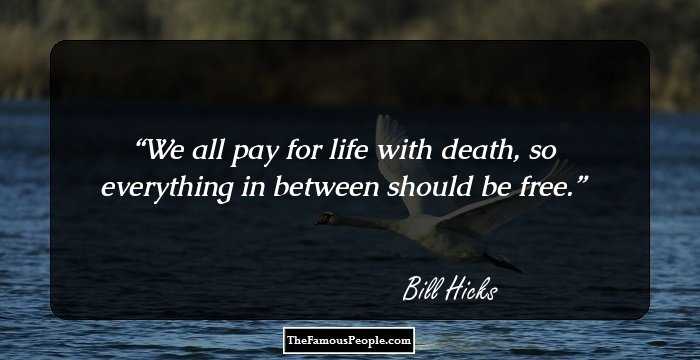 Quotes: Life, Death
Major Works
In 1989, he released his first video, ‘Sane Man’. It was a high energy video, marked by his wonderful performance and great sense of humor. He focused on the absurdity of life in his act with a frank view on human perspective on important things.
In 1991, he became a part of a tour to the U. K. where he was highly praised for his perception on society and ironic humor based on it.
Awards & Achievements
In 1991, he won the Critics’ Award at the Edinburgh Festival in U.K.
He was voted as the "Hot Standup Comic" by Rolling Stone magazine in 1993.
In April 2010, Channel 4 ran a poll, "The Top 100 Stand-Up Comedians of All Time", in which Hicks was voted #4. 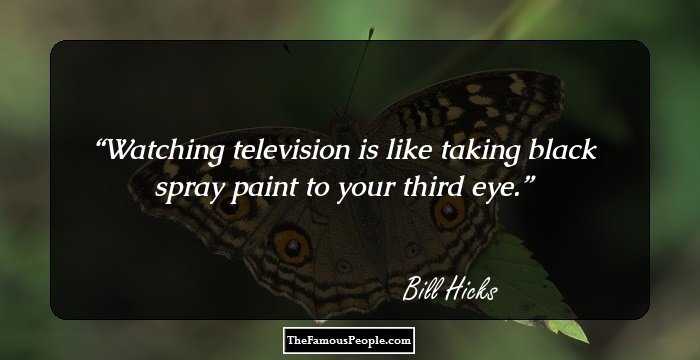 Quotes: Like
Personal Life & Legacy
On February 26, 1994, he died in Little Rock, Arkansas from pancreatic cancer which had spread to his liver. He was buried in the family plot in the Magnolia Cemetery, Leakesville, Mississippi.
At his memorial service his brother read out a piece he had written and requested be read: “I left in love, in laughter, and in truth, and wherever truth, love and laughter abide, I am there in spirit.”

See the events in life of Bill Hicks in Chronological Order