Bill Murray started his career in acting with comic roles, but later moved on to do dramatic roles. He is a golf enthusiast - he worked as a caddy in his formative years, and it was here that he developed a keen love for the game. He is also a baseball enthusiast. As a young man, he started on the wrong note, getting arrested for possession of cannabis. He took his life in the right direction when he and his brothers set out to act in the comedy ‘The Second City’. This was followed by roles in ‘Saturday Night Live’. His first successful movie was ‘Meatball”. It was followed by the cult classic ‘Caddyshack’ and box-office hits such as ‘Stripes’, and ‘Tootsie’. His most popular movie was ‘Ghostbusters’. He did dramatic roles in ‘Wild Things’, ‘Cradle Will Rock’, ‘Hamlet’, and in the 2001 critically acclaimed movie ‘The Royal Tenenbaums’. He provided the voice for cartoon characters such as Garfield and Mr. Badger in ‘Fantastic Mr. Fox’. He has no agents or managers and no entourage following him around. He is involved in providing affordable housing to low-income seniors through Housing Opportunities and Maintenance for the Elderly (H.O.M.E.), to which he has made a generous donation. He attended St. Joseph grade school and Loyola Academy. In order to fund his education at the Jesuit high school, he worked as a golf caddy in his teens.
As a teen, he was the singer of a band called the Dutch Masters and performed in high school and community theatre. He attended Regis University, Denver but dropped out and returned to Illinois.
In 1970, he was arrested at Chicago's O'Hare Airport for trying to smuggle cannabis. He was convicted and sentenced to probation. 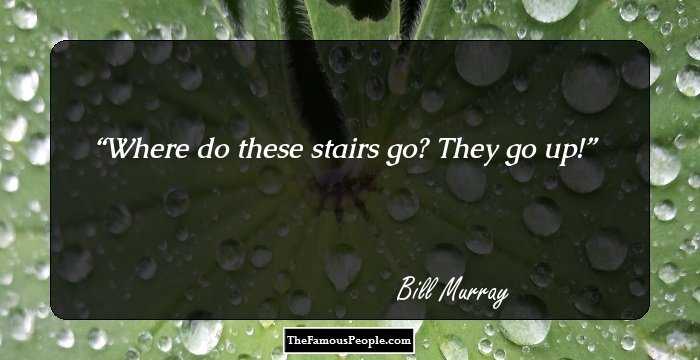 The Sexiest Men Of 2020, Ranked
Career
He joined his brother in the cast for the improvisational comedy ‘The Second City’ in Chicago and got to study under Del Close. This gave direction to his life and he took up acting.
In 1975, he was cast in the short-lived ABC variety show, Saturday Night Live. Two years later, NBC invited him to their Saturday Night Live. He was with it for three seasons.
In 1979, he landed his first movie role in the box-office hit, ‘Meatballs’. It was followed by ‘Where the Buffalo’s Roam’ in which he portrayed Hunter S. Thompson. However, the movie flopped.
In 1980, he restored his image as an actor with the cult classic ‘Caddyshack’. The following years saw him act in box-office hits such as ‘Stripes’, and ‘Tootsie’.
In 1984, he co-wrote and acted in ‘The Razor’s Edge’. The movie did not do very well and he was so disappointed that he took four years off, appearing in only cameo roles.
He took time off from movies, except for a cameo appearance in ‘Little Shop of Horrors’ in 1986, to be with his family and to study philosophy and history at the Sorbonne.
In 1988, he returned to movies with ‘Scrooged’. It was followed by the sequel ‘Ghostbusters II’, the next year. He even co-directed the movie ‘Quick Change’ with Howard Franklin.
In 1999, he wrote a semi-autobiographic book ‘Cinderella Story: My Life in Golf’, explaining his love for the game of golf.
Once he decided to take up dramatic roles, his career started sky-rocketing with roles in ‘Wild Things’, ‘Cradle Will Rock’, ‘Hamlet’, and in the 2001 critically acclaimed movie ‘The Royal Tenenbaums’.
Continue Reading Below
In 2004, he provided the voice-over for the cartoon character Garfield in ‘Garfield: The Movie’ and two years later for ‘Garfield: A Tail of Two Kitties’.
In 2004, he worked in Wes Anderson’s ‘The Aquatic Life’. He also starred in Jim Jarmusch's ‘Broken Flowers’. The next year, he appeared in cameo roles in ‘The Darjeeling Limited’ and ‘Get Smart’.
After a break from acting, he appeared in a notable role in the movie ‘City of Ember’ in 2008. In the next year, he appeared in a cameo role in the comedy ‘Zombieland’.

In 2012, he took up the role of President Franklin D. Roosevelt in the movie ‘Hyde Park on Hudson’. He also starred in Wes Anderson’s ‘Moonrise Kingdom’.

He starred alongside Johnny Depp and Jude Law in Wes Anderson’s next film ‘The Grand Budapest Hotel’, which released in 2014. He is also renonwed for his voicing work that include 'The Jungle Book,' 'Garfield: The Movie,' 'Isle of Dog,' 'Fanatstic Mr. Fox,' and more. 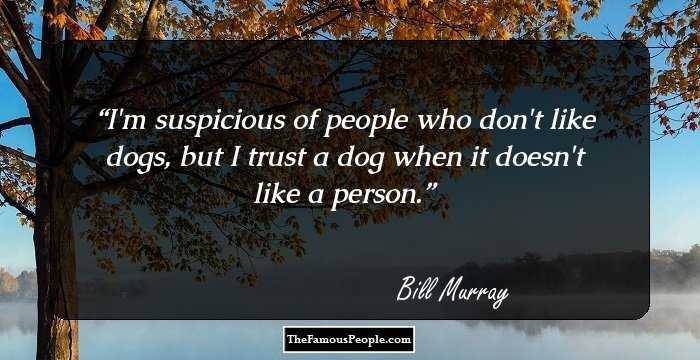 Quotes: Like, I
Major Works
In 1984, he made a deal with Columbia Pictures to star in ‘Ghostbusters’. Murray stars as one of the three eccentric ghost-catching parapsychologists. ‘Ghostbusters’ was a huge hit.

The early 1990s, saw him act in movies such as ‘What About Bob?’ and ‘Groundhog Day’. He won critical acclaim for both movies which went on to become box-office hits.

In 2003, he acted in Sofia Coppola's ‘Lost in Translation’. He won a Golden Globe Award, a BAFTA Award, and an Independent Spirit Award. He lost the Academy Award to Sean Penn.

He bagged in a 'Primetime Emmy Award' for his role in 'Olive Kitteridge.' In 2016, he also earned the 'Mark Twain Prize for American Humor.' 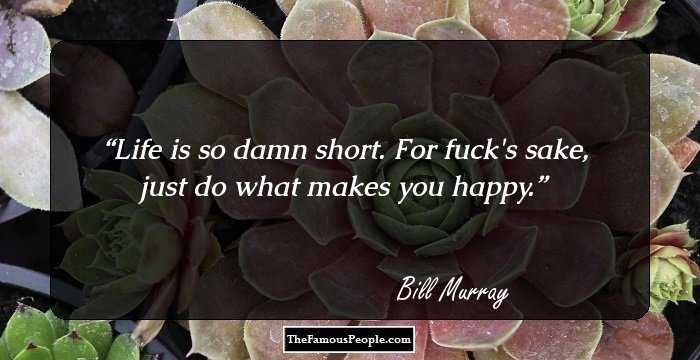 In 1981, he married Margaret Kelly on Super Bowl Sunday. They had a marriage ceremony later in church with family on March 25. They had two sons, Homer and Luke.

Murray and Kelly divorced after Murray’s affair with Jennifer Butler came to light. He married Butler in 1997. They had four sons: Caleb, Jackson, Cooper and Lincoln. Butler filed for divorce on the grounds of domestic violence, infidelity and addiction to sex, marijuana and alcohol. They were granted divorce in 2008.

Trivia
This prominent actor was the M.C. for Eric Clapton's Crossroads Guitar Festival on July 28, 2007. He dressed in various guises of Clapton as he appeared through the years.
This famous actor won the Pro-Am championship at the AT&T Pebble Beach National Pro-Am in 2011, when he played with tournament champion D. A. Points.

Quotes By Bill Murray | Quote Of The Day | Top 100 Quotes

See the events in life of Bill Murray in Chronological Order