William Harvey is best remembered as the first man who aptly described the circulation of blood in the bodythrough the functioning of the heart. An anatomist and a physician by profession, Harvey’s discovery was crucial and opened new avenues of study in blood circulation and distribution. His experimentation thwarted the incorrect belief that liver was the source of blood movement. He instead showed the world that the heart formed the centre of blood circulation and it was through it that arteries and veins circulated the blood to the body and the brain. He also established the fact that the regular contractions of the heart pumped the flow of blood around the whole body. The discovery was extraordinarily remarkable and sealed Harvey’s place in the history of medicine forever. Apart from doing significant medical research and experimentation, Harvey served as the royal physician to King James I and later King Charles I. Simultaneously, he also served various aristocrats and royals. In his lifetime, Harvey held the chair of a Lumleian lecturer and also served patients at St Bartholomew's Hospital. Towards the end of his life, Harvey came up with a masterpiece, ‘De Generatione Animalium’, which concentrated on embryology. The book highlighted the theory of ‘epigenesis’ which stated that the organism does not exist as a minute entity within the ovum but develops from it by a gradual building up of its parts. He was also the first to suggest that humans and mammals reproduced via fertilization of an egg by a sperm. Jonas Salk
DID WE MISS SOMEONE?
CLICK HERE AND TELL US
WE'LL MAKE SURE
THEY'RE HERE A.S.A.P
Quick Facts

British People
Male Physicians
British Physicians
Aries Men
Childhood & Early Life
William Harvey as born on April 1, 1578, in Folkestone, England, to Thomas Harvey, a jurat of Folkestone who served as the mayor and Joan Halke. He was the eldest of the nine children born to the couple.
Harvey gained his early education inFolkestone where he was educated in Latin. He later attended King’s School Canterbury after which he enrolled at the Gonville and Caius College in Cambridge in 1593. In 1597, Harvey graduated with a bachelor’s degree in Arts. He survived on scholarships.
Post completing his graduation, Harvey travelled to Italy. Therein, he gained admission at the University of Paduato study medicine and anatomy. He graduated with a Doctor of Medicine degree from the University of Padua in 1602.
While at the University of Padua, Harvey was greatly influenced by his teacher and skilled anatomist and surgeon, Hieronymus Fabricius. It was from Fabriciusthat Harvey learned the fact that dissection led to a better understanding of the human body. 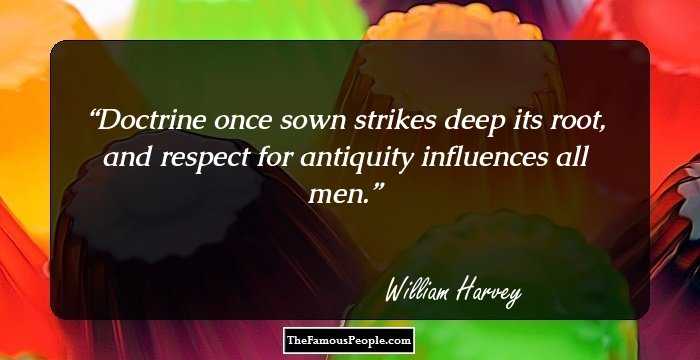 Continue Reading Below
Career
Immediately after completing his education, Harvey returned to England in 1602. On his return, he earned yet another degree of Doctor of Medicine from the University of Cambridge. The same year, he even became a fellow at his alma mater, Gonville and Caius College. He then moved to London to work as a physician.
In 1604, Harvey joined the College of Physicians. Three years later, he became a fellow at the College of Physicians. In 1607, he was appointed as a physician at St Bartholomew’s Hospital.In 1609, he rose to the position of Head Physician at the Hospital.
In 1615, William Harvey’s career saw a major leap when he was appointed as the Lumleian lecturer. The post came along with the duty to spread awareness and enhance the general knowledge of anatomy across England.
While continuing to serve as the Lumleian lecturer and at the Bartholomew Hospital, a lucrative offer led to him being appointed as the ‘Physician Extraordinary’ to King James I in 1618. He also served other prominent aristocrats and bureaucrats such as Francis Bacon.
In 1625, when James’ son, Charles I ascended to the throne, William Harvey served as his ‘Physician in Ordinary’ as well. Both James and Charles took a great interest in Harvey’s research and scientific work and encouraged him to work harder.
Harvey accompanied Charles I on the latter’s numerous expeditions and hunting adventures. During this time, Harvey gained access to many deer carcasses on which he carried out his experimentation and made many observations and theories. Harvey ignored medical texts and instead preferred to concentrate on his own observations and deductions which he made after dissection of animals.
In 1628, Harvey published the magnum opus of his career, ‘De Moto Cordis’ which translated in English became known as‘Anatomical Studies on the Motion of the Heart and Blood in Animals.’ In ‘De Motu Cordis’, Harvey became the first person to perfectly describe the function of the heart and the circulation of blood around the body.
Through his experimentation, he showed that arteries and veins circulated blood through the whole body. He also indicated that the heartbeats produce a constant circulation of blood through the whole body. He replaced the prior belief of liver being the main source of blood circulation. He also established the fact that blood in arteries and veins all come through a single origin, i.e. heart.
Harvey established the fact that there is a constant flow of blood to the heart. He also explained the fact that blood flowed in one direction throughout the bodyand that it was in lungs that the transformation of venous blood to arterial blood took place. There is a proper circulation method of blood which returns to where it begins its circuit of the body. Harvey’s discovery was met with great interest in England although the Europeans were sceptical of it.
Continue Reading Below
In 1636, Harvey returned to Italy. He was invited by the Jesuits at the English College, Rome. The same year, he acted as doctor to a diplomatic mission sent to see the Holy Roman emperor, Ferdinand II. This involved nearly a year of travel around Europe. Apart from medicine, Harvey’s interest in philosophy, literature, and art helped him enjoy the rich heritage and artistic galore that the country displayed while he was in Italy.
During the English Civil War, William Harvey served as a physician, protecting the king’s children during the Battle of Edgehill and serving the wounded on various occasions. When King Charles I went to Oxford, Harvey accompanied him. In 1642, he was made 'Doctor of Physic' and later in 1645, Warden of Merton College.
The surrender of Oxford in 1645 marked the beginning of Harvey’s retirement from public life as well. Having lost his wife, he returned to London to live with his brothers. He retired from St Bartholomew Hospital and other official duties including his royal duty as well.
He spent much of his later life concentrating on the nature of reproduction in animals. In 1651, he came up with his second masterpiece, ‘De Generatione Animalium’. The work focused on embryology. The work putlighton the theory of ‘epigenesis’, suggesting that humans and other mammals reproduced via fertilization of an egg by sperm. He refuted the belief thatthe organism existed as a minute entity within the ovum. Instead, he argued that they developed over time by a gradual building up of the parts. His theory was confirmed only in the 19th century. 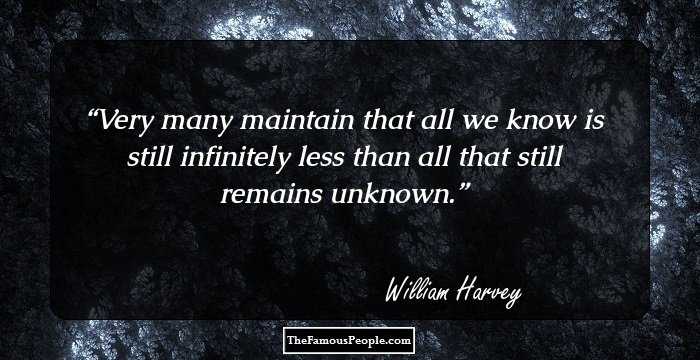 Major Works
William Harvey’s most important contribution came in 1628 when he published his masterpiece ‘De Motu Cordis.’A book that detailed Harvey’s experimentation and observation, it refuted the belief that liver was the source of blood movement. Harvey became the first person to perfectly describe the function of the heart and that the circulation of blood around the body was through it.
He also established the fact that arteries and veins circulated blood through the whole body, including the brain. He also explained how blood flowed in one direction throughout the body and that it was in the lungs that the transformation of venous blood to arterial blood took place.
Personal Life & Legacy
William Harvey married Elizabeth Browne, daughter of the prominent physician Lancelot Browne. The couple did not have any children. His wife predeceased him.
He suffered from gout, kidney stones and insomnia in his later life. In 1651, he unsuccessfully attempted to take his life with laudanum.
On June 3, 1657, Harvey breathed his last due to a cerebral haemorrhage at his brother’s home in Roehampton. He was buried in Hempstead Essex.
On St. Luke's Day, October 18, 1883, his remains were reinterred, the leaden case carried from the vault by eight Fellows of the College of Physicians, and deposited in a sarcophagus.
To commemorate his contribution to the field of anatomy and physiology, the William Harvey Hospital was constructed in the town of Ashford, several miles from his birthplace of Folkestone in 1973. 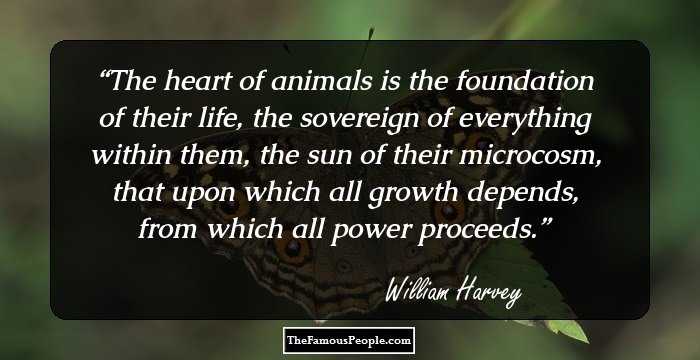 See the events in life of William Harvey in Chronological Order