William Cowper was an English poet and hymnodist. He is considered as one of the most popular poets of his time who contributed to the 18th century English poetry in a prominent way by writing about everyday life events and England’s countryside. He is called the pioneer of the Romantic poetry by poets like William Wordsworth and Samuel Taylor Coleridge. ‘The Task: A Poem, in Six Books’, which is a poem in blank verse and is now considered to be his greatest work ever. His translations of Homer's ‘Iliad’ and ‘Odyssey’ into blank verse, and his adaptations were the most noteworthy English interpretations of these epic poems since those of Alexander Pope. Cowper suffered from long intervals of lunacy and was sent to private asylums on many occasions. His friend, Mary Unwin, who he lived with, took care of him during his times of tribulations. He found safe haven in an ardent evangelical Christianity, which later on became the inspiration for his famous hymns. His poem ‘Light Shining out of Darkness’ rendered English language the idiom ‘God moves in a mysterious way’. British People
British Men
Male Poets
Male Writers
British Poets
Childhood & Early Life
William Cowper was born on November 26, 1731 in Berkhamsted, Hertfordshire, England, to Ann and Rev. John Cowper. His father was a rector of the Church of St. Peter as well as a chaplain to George II.
His mother died in 1737 at the age of thirty four, when he was only six years old. His father had seven children in total and only one other, apart from Cowper, grew up to adulthood, John.
Before his mother’s death, Cowper attended a dame’s school but upon her sad demise, he was sent to a boarding school.
For a brief period of time, due to the inflammation of his eyes, Cowper was put into the care of an oculist but when he felt better, he was sent to a Westminster school. His schoolfellows included, Warren Hastings, Colman, etc.
When he turned 18, he started working at a solicitor’s office in Ely Place, Holborn, and met Thurlow, who was a fellow clerk and the future lord chancellor. Thurlow helped Cowper to realize his ambition. 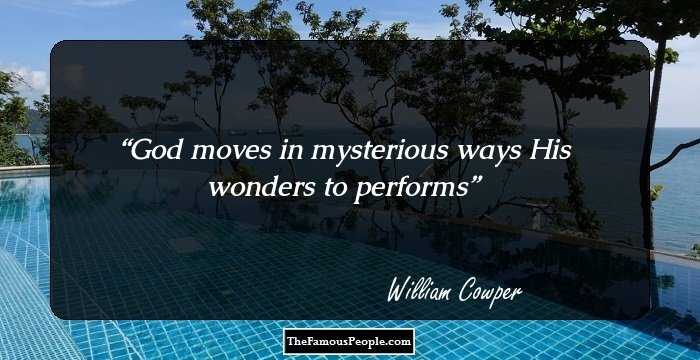 The Sexiest Men Of 2020, Ranked
Career
For the 3 years that Cowper worked in Ely Place, he visited his uncle Ashely in Southampton Row and fell in love with his cousin Theodora. But his father was opposed to the relation and it left him in distress.
His cousin, Major Cowper, nominated him to a clerkship in the House of Lords in 1763 and it consisted of a preliminary appearance at the bard of the house.
The prospect made him very anxious and he tried to kill himself by consuming poison. And after trying to commit suicide on three other occasions, he was sent to a lunatic asylum.
After coming out of the asylum after 18 months, he settled in Huntingdon with a retired clergyman Morley Unwin and his wife Mary. In 1779, after a gospel devote, John Newton, invited him to write a hymnbook, ‘Olney Hymns’ was published.
The book contained hymns like, ‘Praise for the Fountain Opened’, ‘Light Shinning out of Darkness’, etc. Cowper’s ‘Olney Hymns’ as well as other hymns are now preserved in the Sacred Harp.
In 1773, he suffered an attack of lunacy as he imagined that almighty had condemned him to hell and was asking him to kill himself. Upon getting proper care, Cowper started recovering again after a year’s time.
Cowper started writing poetry in 1779 - he started with ‘The Progress of Error’ and within three years, he got many poems published under the title of ‘Poems by William Cowper, of the Inner temple, Esq..’.
In 1785, he got published his next book, ‘The Task: A Poem, in Six Books’, which is a poem in blank verse and is now considered to be his greatest work ever.
Its six books are called, ‘The Sofa’, ‘The Timepiece’, ‘The Garden’, ‘The Winter Evening’, ‘The Winter Morning Walk’, and ‘The Winter Walk at Noon’.
Continue Reading Below
In the same volume Cowper also printed ‘The Diverting History of John Gilpin’, comic verse. The ballad is about a draper called Gilpin who rides a runaway horse. He was inspired by the story when he was severely depressed.
In 1791, he published his translations of Homer's ‘Iliad’ and ‘Odyssey’ into blank verse, and his adaptations were the most noteworthy English interpretations of these epic poems since those of Alexander Pope earlier in the century.
His friend, Mary Unwin, died in 1796 and it left him into a permanent depression. He revised his ‘Homer’ and wrote ‘The Castaway’. He also did some translation work like turning John Gay’s ‘Fables’ into Latin. 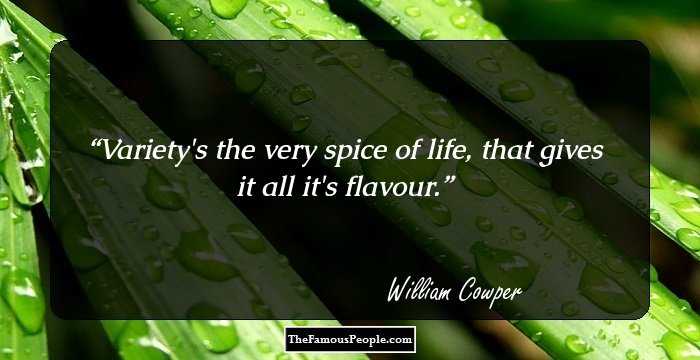 Quotes: Life
Major Works
Cowper’s ‘The Task: A Poem, in Six Books’ depicts the Evangelical spirit of the age that so beautifully that according to one critic, "As Paradise Lost is to militant Puritanism, so is The Task to the religious movement of its author's time."
Personal Life & Legacy
Cowper suffered from grave bouts of depression all his life, the kinds that had sent him to asylums but living with Morley Unwin and his wife Mary Unwin helped him recover from these attacks from time to time.
After Unwin’s death, Cowper stayed with Mary Unwin and he moved with her wherever she moved to live. Sometime before Unwin’s death, the duo settled in East Dereham.
He was seized with dropsy in 1800 and passed away of the same. He is buried in the chapel of St. Thomas of Canterbury, St. Nicholas Church, East Dereham. 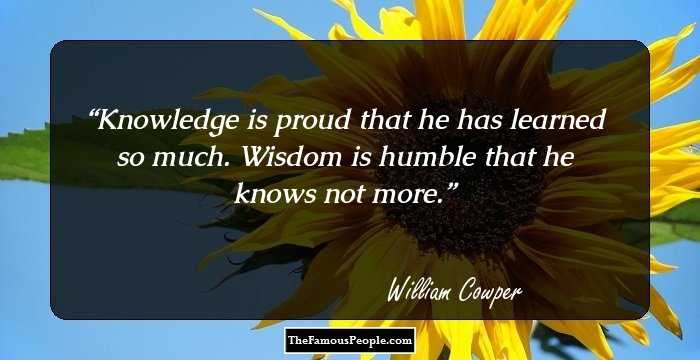 Trivia
He tried to commit suicide three times and was sent to Nathaniel Cotton's asylum at St. Albans for recovery in 1763.
Mary Unwin used to take care of him during his days of crippling depression.
You May Like

Quotes By William Cowper | Quote Of The Day | Top 100 Quotes

See the events in life of William Cowper in Chronological Order