(Canadian Actor, Comedian and Producer Known for His Role as ‘Gob Bluth’ in the TV Series ‘Arrested Development’)

Will Arnett is a Canadian actor, comedian, and producer. He is one of the most talented actors and has carved out a niche for himself in films and television. Arnett was bit by the acting bug early in his life. Subsequently, he was encouraged by his mother to pursue a career in acting and thus started his acting career at an early age. He made his film debut in 1996 when he played ‘Dave’ in the movie ‘Close Up.’ He then made his TV debut and started acting in series like ‘Sex and the City’ and ‘The Mike O'Malley Show,’ with the latter turning out to be his big breakthrough. However, with the discontinuation of the television series, he became frustrated. It was while trying to bring his career back on track that he landed the lead role in the television series ‘Arrested Development.’ The role not only established him as an actor, but also made him a household name. Thereafter, he was cast in lead roles in various TV shows, including ‘Freak Show,’ ‘Sit Down, Shut Up,’ ‘Running Wilde,’ ‘The Increasingly Poor Decisions of Todd Margaret,’ ‘Up All Night,’ and ‘The Millers.’ He also landed prominent roles in several feature films, such as ‘Let's Go to Prison,’ ‘Blades of Glory,’ ‘The Brothers Solomon,’ and ‘Show Dogs.’ Arnett has also lent his voice for commercials, animated films, television cartoons, and video games. Quotes By Will Arnett Actors

Will Arnett was born William Emerson Arnett on May 4, 1970, in Toronto, Ontario, Canada, to Edith Alexandra and Emerson James Arnett. His father was a corporate lawyer and brewer. He was the third of the four children born to the couple.

Arnett attended ‘Lakefield College School,’ the ‘Subway Academy II,’ and ‘Leaside High School’ to complete his formal education. It was while at ‘Subway Academy’ that he took up theatre classes which exposed him to creative art.

Later, he enrolled at the ‘Concordia University,’ Montreal but dropped out after a semester to pursue an acting career. Meanwhile, it was his mother who encouraged him to enter the world of showbiz. He then started auditioning for commercials. 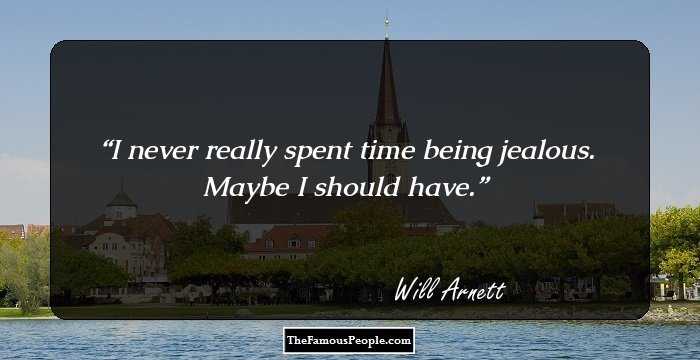 In 1990, he moved to New York to take up an acting course at the ‘Lee Strasberg Theatre and Film Institute.’ Henceforth, he started appearing in plays in New York.

He got his big breakthrough in acting in the year 1996 when he was cast in two movies, ‘Close Up’ and ‘Ed’s Next Move’ where he played ‘Dave’ and ‘Weather Video Guy’ respectively.

From 1998 to 1999, he starred in three movies, ‘The Broken Giant,’ ‘Southie,’ and ‘The Waiting Game.’ In 1999, he also ventured into television with the NBC series ‘The Mike O’Malley Show’ which was canceled after two episodes. He also appeared in an episode of ‘Sex and the City.’

After the cancelation of ‘The Mike O’Malley Show,’ he became depressed and turned to alcohol. However, this did not continue for long as he managed to land other projects.

In 2001, he narrated the film ‘Series 7: The Contenders.’ He was also cast in the CBS television series ‘Loomis.’ He was cast to play the role of protagonist’s slacker brother. The show, however, did not pick up and was finally canceled.

In 2002, he starred intermittently in a number of television series, such as ‘Yes, Dear,’ ‘The Sopranos,’ and ‘Law & Order: Special Victims Unit.’

Frustrated with the lack of success in his career, he started turning down offers to audition for pilot roles. However, after much coaxing from his agent, he auditioned for ‘Arrested Development.’

‘Arrested Development’ hit the television screens in 2003. In the series, he played the role of ‘George Oscar "Gob" Bluth II.’ The show garnered mainstream success and Arnett’s portrayal of the role was much appreciated. The show ran until 2006 and gained much critical acclaim and cult following. In 2006, he was cast for the role of ‘Duncan Schiesst’ in the television show ‘Freak Show.’

Following his successful television stint, he played major roles in several movies, such as ‘RV,’ ‘The Great New Wonderful,’ ‘Let’s Go To Prison,’ and ‘Wristcutters: A Love Story.’ He also voiced the character of ‘Lone Gunslinger’ in ‘Ice Age: The Meltdown.’

In 2007, he landed the role of ‘Stranz Van Waldenberg’ in the movie ‘Blades of Glory’ opposite Amy Poehler. The film was a blockbuster hit, grossing around $145 million at the box office.

The same year, he played supporting roles in movies, such as ‘Hot Rod,’ ‘The Comebacks,’ and ‘The Brothers Solomon.’ He also voiced the character of ‘Karl Horst’ in the computer-animated comedy film ‘Ratatouille.’

The year 2008 witnessed him play supporting role in the sports comedy film ‘Semi-Pro.’ In the film, he played the character of ‘Lou Redwood,’ a commentator and former player. Furthermore, he starred in the film ‘The Rocker’ and voiced ‘Vlad Vladikoff’ in the animated adventure comedy film ‘Horton Hears a Who!’

In 2009, he was cast as a series regular in the television sitcom ‘Sit Down, Shut Up.’ The same year, he played supporting roles in films like ‘G-Force,’ ‘Brief Interviews with Hideous Men,’ and ‘Spring Breakdown.’ In 2010, he was seen playing ‘Antonio’ in the romantic comedy film ‘When in Rome.’

From 2010 to 2011, he played the character of ‘Steve Wilde,’ a spoiled rich man, in the television series ‘Running Wilde.’ Around the same time, he also played ‘Brent Wilts’ in ‘The Increasingly Poor Decisions of Todd Margaret.’ From 2011 to 2012, he starred as ‘Chris,’ a former lawyer and stay-at-home dad, in the television series ‘Up All Night.’

Meanwhile in 2010, along with ‘Arrested Development’ co-star Jason Bateman, he started the ‘DumbDumb Productions.’ The company aimed at producing digital content. The same year, they came up with their first video ‘Prom Date.’

In 2012, he appeared in an episode each in ‘The Cleveland Show’ and ‘Comedy Bang! Bang!’ Furthermore, he made a cameo appearance in ‘Men in Black 3’ and appeared as himself in the documentary ‘Mansome.’

He then became part of the main cast of CBS’s sitcom ‘The Millers’ where he played ‘Nathan Miller’ from 2013 to 2015. Meanwhile in 2014, he landed the titular voice role of Netflix’s adult animated tragicomedy ‘BoJack Horseman.’

In 2014, he voiced the character of ‘Bruce Wayne/Batman’ in the computer-animated comedy ‘The Lego Movie.’ He went on to reprise his voice role in ‘The Lego Batman Movie’ and ‘The Lego Movie 2: The Second Part.’ In 2014, he also appeared as ‘Vern Fenwick’ in the superhero film ‘Teenage Mutant Ninja Turtles.’ He reprised his role as ‘Vern’ in the film’s sequel ‘Teenage Mutant Ninja Turtles: Out of the Shadows’ in 2016.

In 2016, he co-created another Netflix comedy web series titled ‘Flaked’ alongside Mitch Hurwitz. In the series, he played the lead role of ‘Chip.’ In the ensuing years, he played guest roles in series like ‘A Series of Unfortunate Events,’ ‘The Gong Show,’ ‘Hot Date,’ and ‘Unikitty!’

In 2018, he became part of Netflix’s revival of Arrested Development’s fifth season. The following year, he became part of the drama ‘Riviera.’ In 2020, he started hosting an American reality competition television series titled ‘Lego Masters.’ The same year, he also landed the role of ‘Mark Crane’ in a British comedy television series titled ‘The First Team.’ 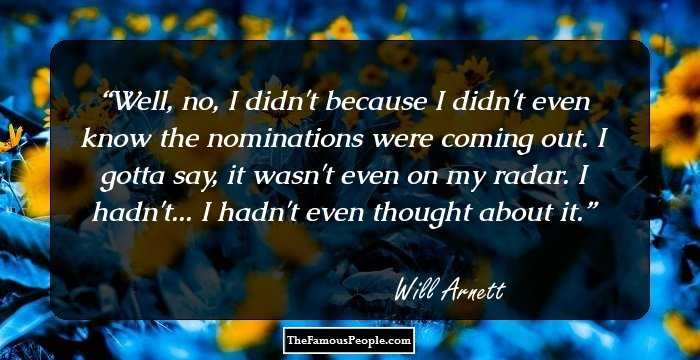 In 2004, he was honored with the ‘TV Land Award’ under the ‘Future Classic Award’ category.

He has received six ‘Emmy Award’ nominations; one each for ‘Arrested Development’ and ‘BoJack Horseman,’ and four times for ‘30 Rock.’

In 1994, he married actress Penelope Ann Miller, but the relationship did not last long as the two got divorced in 1995.

After his divorce, he was romantically linked with various stars, including Missy Yager, with whom he had a four-year live-in relationship, and Amy Poehler. Eventually, he married Amy Poehler in 2003. The couple was blessed with two sons. In 2012, they separated after nine years of marriage. Their divorce was finalized in 2016. 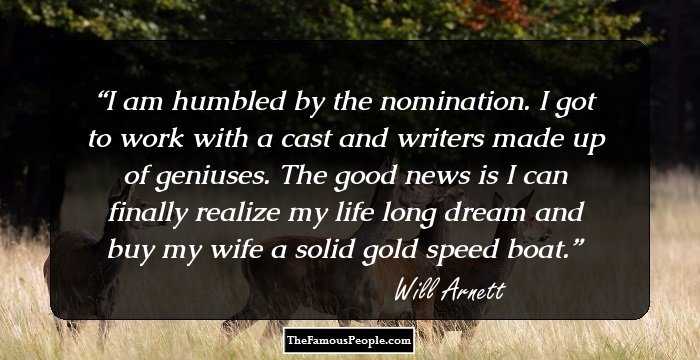 Quotes By Will Arnett | Quote Of The Day | Top 100 Quotes

See the events in life of Will Arnett in Chronological Order