Vincent Leonard Price, Jr. was an American actor, narrator, voice-over artist and cookbook writer. He is mostly remembered for his remarkable roles in various horror movies that he did in the long span of his Hollywood career. His original ambition was to become an art historian. He went to University of London to pursue Fine Arts but he found himself getting more and more drawn towards the world of acting. He did some theatre work in London and the States, after his return, but it was not until his entry into Hollywood as a character actor in the late 1930s that he was recognized for his versatile talent. Soon after, he ventured into comedy and horror film genre and the audience started to commend him for his impeccable style of mysterious acting and his well-suited distinctive voice. He is particularly remembered for his various roles in Roger Corman’s adaptations of Edgar Allan Poe’s work like, ‘Tales of Terror’, ‘The Raven’, etc. Price has done many voice-overs and narration projects as well and was well known on radio for his well studied readings and narrations. His latest work was in Tim Burton’s ‘Edward Scissorhands’, in which he played the role of the inventor of ‘Edward’. American Celebrities
American Men
Missouri Actors
Yale University
Gemini Actors
Childhood & Early Life
Vincent Price was born on May 27, 1911 in St. Louis, Missouri, to Vincent Leonard Price, Sr. and Marguerite Cobb Wilcox. His father was the president of the National Candy Company. His grandfather was the innovator of the cream of tartar baking powder.
Price belonged to an affluent family and attended the St. Louis Country Day School. He later went to the Yale University to study art history and remained active in the publication of their humor magazine, ‘Yale Record’.
For a few years after graduating, Price took up teaching and then attended the University of London for a Masters Degree in Fine Arts but he felt more and more inclined towards theatre. 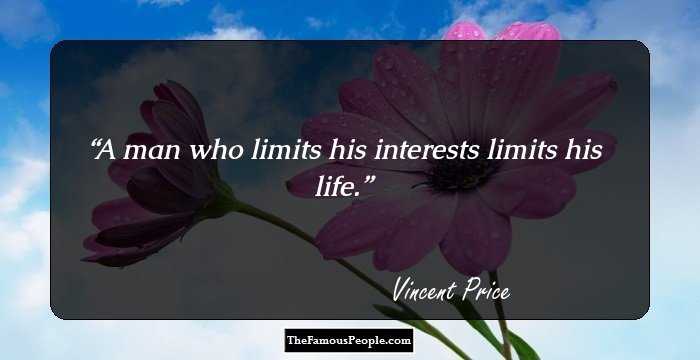 Quotes: Life
Continue Reading Below
Career
Price did theatre for the first time in 1934 and from there onwards his acting career began in London with his performance in Orson Welles’s Mercury Theatre. In the following years, he appeared in ‘Victoria Regina’.
Year 1938 marked the beginning of Price’s Hollywood career; he started out as a character actor with the movie, ‘Service de Luxe’. But it was ‘Laura’ that made him a known face in the industry.
He ventured into the horror movies genre and did Boris Karloff’s ‘Tower of London’ in 1939. In the following year, he appeared in the lead role in a horror science fiction film, ‘The Invisible Man Returns’.
In 1944, Price did many character based movies like ‘Wilson’—an American biographical movie about President Woodrow Wilson, and ‘The Keys of the Kingdom’ based on a novel with the same title.
In the following years, Price endeavored into stronger roles and some of them were even villainous—‘Dragonwyck (1946)’, ‘Leave Her to Heaven (1946)’, ‘The Web (1947)’, ‘The Long Night (1947)’, ‘The Bribe (1949)’, etc.
In 1950, he did the first big role of his film career in the biopic, ‘The Baron in Arizona’. It was also the year when his first American comedy ‘Champagne for Caesar’, a film about a radio quiz show, released.
In the 1950s, Price did a lot many remarkable horror movies, like, ‘House of Wax (1953)’—the first 3-D horror film in the American cinema history, ‘The Mad Magician (1954)’, ‘The Fly (1958)’, ‘House on Haunted Hill (1959)’, etc.
With his image set as a horror movies actor, he was offered a variety of successful roles in horror genre in 1960s: ‘House of Usher (1960)’, ‘Tales of Terror (1962)’, ‘The Tomb of Ligeria (1965)’, ‘Witchfinder General (1968)’, etc.
1970s saw Price’s successful venture into radio with BBC Radio’s horror ‘The Price of Fear’. His distinctive voice gave an edge to his radio performance. Other projects include: ‘Dr. Phibes Rises Again (1972)’, ‘Theatre of Blood (1973)’, etc.
Continue Reading Below
From 1975, Price’s horror film career faced a sudden dip as horror film industry was suffering losses. He concentrated on narrative roles and voice over projects.
He returned back to the stage in 1977 in the one-man stage play, ‘Diversions and Delights’, in which he played the role of ‘Oscar Wilde’. He performed the play worldwide and it is considered as his best performance ever.
In 1982, Price did a prominent narration work in Tim Burton’s ‘Vincent’. It was a story about a boy who enters into a fantasy world where he is ‘Vincent Price’. He also did a monologue for Jackson’s song ‘Thriller’.
In 1982, he appeared in the television production of Gilbert & Sullivan’s ‘Ruddigore’. He played the role of ‘Sir Despard Murgatroyd’. Around the same time he did British spoof horror movie, ‘Bloodbath at the House of Death’.
From 1981-1989, he was the host of the PBS television series, ‘Mystery!’. During the same time, he did a voice-over for ‘The 13 Ghosts of Scooby-Doo (1985)’ and for Disney’s ‘The Mouse Detective (1986)’.
His last significant work was Tim Burton’s romantic dark fantasy, ‘Edward Scissorhands’, in which he played the role of the inventor of ‘Edward Scissorhands’, starring alongside Johnny Depp and Winona Ryder. 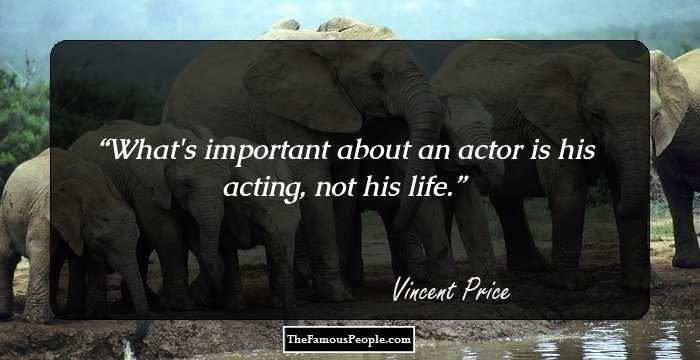 Quotes: Life
Major Works
Price’s is well-known for his voice-over and narration work, but what he is most remembered for is his horror genre roles, especially Roger Corman’s adaptations of Edgar Allan Poe’s works.
Personal Life & Legacy
Price had three marriages: first marriage to actress Edith Barrett with whom he had a son named Vincent, second marriage to Mary Grant with whom he had a daughter Victoria and third to Australian actress Coral Browne.
Price suffered from emphysema as he was a heavy smoker and also had Parkinson’s disease as he grew older. On October 25, 1993, he died of lung cancer at UCLA Medical Center and was cremated in Malibu, California. 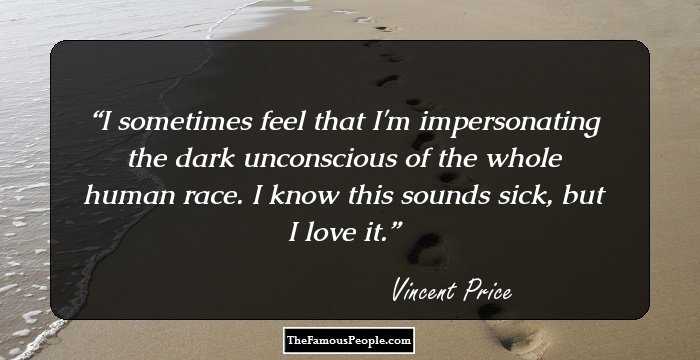 Quotes: Love, I
Trivia
Price was a wonderful gourmet cook and an art collector. He is the writer of many noted cookbooks and used to host his own cookery show, ‘Cooking Pricewise’.
He and his second wife donated hundreds of art work and a large amount of money to East Los Angeles College so as to built Vincent Price Art Museum there.
His love for roller coasters and amusement parks was well known, which is why he hosted the hour-long television special ‘America Screams’, riding on many of the roller coasters himself and reciting their history.
Price made guest star appearances in many television shows like, ‘Batman’, ‘Get Smart’, ‘F Troop’, ‘The Man from U.N.C.L.E.’ and ‘Voyage to the Bottom of the Sea’.

Quotes By Vincent Price | Quote Of The Day | Top 100 Quotes

See the events in life of Vincent Price in Chronological Order