Advanced Search
Van Morrison aka Sir George Ivan Morrison OBE is a Northern Irish singer, songwriter, musician and record producer. Also known as "Van the Man", he is recognized for his musical achievements as well as his services to charitable causes and tourism in his native place. Morrison grew up listening to artistes such as Ray Charles, Sonny Terry and Jelly Roll Morton, thanks to his father’s varied record collection that exposed him to various musical genres. He started his music career as a teenager in the 1950s, playing a variety of instruments like harmonica, guitar, saxophone, and the keyboards in Irish bands, covering the popular hits of that time. Morrison came into the limelight in the mid-1960s as the lead vocalist of the R&B band ‘Them’ with whom he recorded the classic "Gloria". He then went on to perform as a solo artiste and gained further fame with the release of his 1967 hit single "Brown Eyed Girl". The Irish singer strengthened his reputation even more in the 1970s when he released a series of hit albums and gave stunning live performances. Today, he continues to sing and perform and often collaborates with other well-known artistes and bands like The Chieftains and Georgie Fame. In recognition of his works, Morrison has received several awards including a Brit Award and two Grammy Awards. British People
Northern Irish People
Folk Singers
Lyricists & Songwriters
Record Producers
British Men
Childhood & Early Life
George Ivan “Van” Morrison was born on 31 August 1945 in Bloomfield, Belfast, Northern Ireland as the only child of his parents. His mother Violet Stitt Morrison had been a singer and dancer in her youth while his father George Morrison was a shipyard electrician.
From 1950 to 1956, Morrison attended Elmgrove Primary School. At that time, his father had one of the largest record collections and Morrison grew up listening to various music legends.
His father's collection also exposed him to numerous musical genres, such as the gospel of Mahalia Jackson; the blues of Muddy Waters; the jazz of Charlie Parker; the country music of Hank Williams and Jimmie Rodgers; and the folk music of Woody Guthrie.
At the age of 11, Morrison started playing the guitar. A year later, he formed his first ever band called "The Sputniks" that played at a number of local cinemas before disbanding.
After this, he formed another skiffle band Midnight Special and played at school concerts. After learning saxophone, he joined the band the Javelins along with lead vocalist Deanie Sands, drummer and vocalist Roy Kane, and guitarist George Jones. Later, these four main musicians of the Javelins, with the recruitment of pianist Wesley Black, became known as the Monarchs.
Morrison then enrolled at Orangefield Boys Secondary School. However, he left the school in July 1960 with no formal qualification. He then went on to work as a window cleaner before pursuing a professional music career. 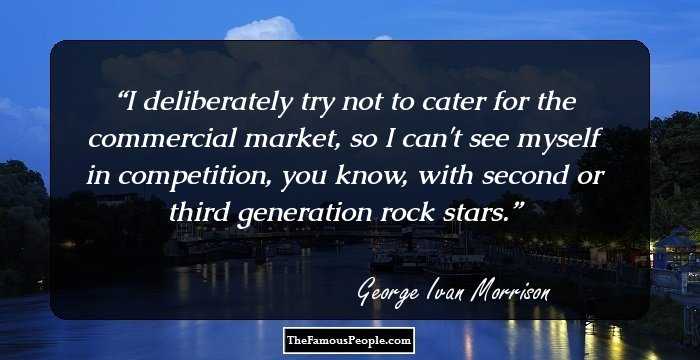 Male Singers
Virgo Singers
Male Musicians
Virgo Musicians
Career
Van Morrison continued playing with the Monarchs. At the age of 17, he toured Europe for the first time with the band. While in Germany, the band recorded their single, "Boozoo Hully Gully"/"Twingy Baby" under the name of Georgie and the Monarchs.
In November 1963, the group disbanded and Morrison went on to play with Geordie Sproule and guitarist Herbie Armstrong in the Manhattan Showband. When Armstrong auditioned to play with the Golden Eagles and Brian Rossi, later known as the Wheels, Morrison also went along and was hired as a blues singer.
He eventually left the Golden Eagles to play with a new R&B club band along with Billy Harrison, Alan Henderson, Ronnie Millings and Eric Wrixon. This band, named ‘Them,’ went on to create numerous covers.
The band then signed a deal with Dick Rowe of Decca Records. In the mid-1960s, they released two studio albums and ten singles including the hits "Here Comes the Night", "Baby, Please Don't Go" and "Mystic Eyes".
In 1966, Them undertook a two-month tour to the USA. After performing in Ireland, they disbanded and Morrison then began concentrating on writing songs.
Van Morrison was soon contacted by Bert Berns who asked him to record solo for his label Bang Records. Morrison agreed and recorded eight songs which were released as part of the album ‘Blowin' Your Mind.’
In mid-June 1967, the Irish singer’s single "Brown Eyed Girl" was released. The song became a huge hit and charted at multiple charts.
Morrison then moved to Boston where he had trouble finding concert bookings. He then began recording with Warner Bros Records. He also worked with Berns' Web IV Music.
His first album for Warner Bros Records was titled ‘Astral Weeks.’ Released in 1968, this album is considered as one of the best albums of all time. It was listed at #19 on Rolling Stone magazine's list of ‘The 500 Greatest Albums of All Time’ as well as at #2 on the 1995 Mojo list of the 100 Best Albums. In December 2009, the album was voted the top Irish album of all time in a poll conducted by Hot Press magazine.
Continue Reading Below
The Irish artiste then came up with his album ‘Tupelo Honey’ (1971) that included the hit singles "Wild Night", “Jackie Wilson Said” and "Redwood Tree". He released his next album ‘Hard Nose the Highway’ in 1973; it contained the popular song "Warm Love". That year, Morrison also wrote seven tracks for his album ‘Veedon Fleece.’
In 1977, he collaborated with Dr. John on his album ‘A Period of Transition’. Two years later, he released his album ‘Into the Music’ that included the hit track "Bright Side of the Road".
The Irish singer’s most controversial album ‘Common One’ came out in February 1980. It consisted of six songs with "Summertime in England" being the longest one. Two years later, his album ‘Beautiful Vision’ was released. It included the songs "Vanlose Stairway", "Scandinavia" and "She Gives Me Religion".
During the 1980s, Morrison released a few albums based on the themes of spirituality and faith. These albums titled ‘Inarticulate Speech of the Heart’, ‘A Sense of Wonder’ and ‘No Guru, No Method, No Teacher’ registered good sales.
In 1987, he released ‘Poetic Champions Compose’ that included the song "Someone Like You". This song later went on to be featured in the soundtracks of many films including 1995's ‘French Kiss.’ After this, Morrison released the albums ‘Irish Heartbeat’ and ‘Avalon Sunset’.
The 1990s began with the release of his album ‘The Best of Van Morrison.’ It was followed by albums like ‘After Enlightenment’ and ‘The Best of Van Morrison Volume Two’. In 1994, the singer’s live double album titled ‘A Night in San Francisco’ came out.
During the 1990s, he also gave a number of live jazz performances including ‘How Long Has This Been Going On’, ‘Tell Me Something: The Songs of Mose Allison’ and ‘The Skiffle Sessions – Live in Belfast 1998’.
Van Morrison continued to tour and record in the 2000s. In 2005, he released his album ‘Magic Time’ that debuted at #25 on the US Billboard 200 chart upon its release.
In 2006, he released ‘Pay the Devil’, an album with a country music theme. That year, he also released his first ever commercial DVD titled Live at Montreux 1980/1974.
Continue Reading Below
His new double CD compilation album titled ‘The Best of Van Morrison Volume 3’ came out in 2007. This was followed by a 37-track double CD compilation album ‘Still on Top – The Greatest Hits’.
On 17 March 2008, Morrison's studio album ‘Keep It Simple’ was released by Exile/Polydor Records in the UK. Four years later, his studio album titled ‘Born to Sing: No Plan B’ was released.
In the mid-2010s, the singer worked on a few albums, namely ‘Duets: Re-working the Catalogue’, ‘Keep Me Singing’ and ‘Versatile’.
His studio album ‘You’re Driving Me Crazy’ was released in April 2018 via Sony Legacy Recordings. This album features numerous collaborations with artiste Joey DeFrancesco. 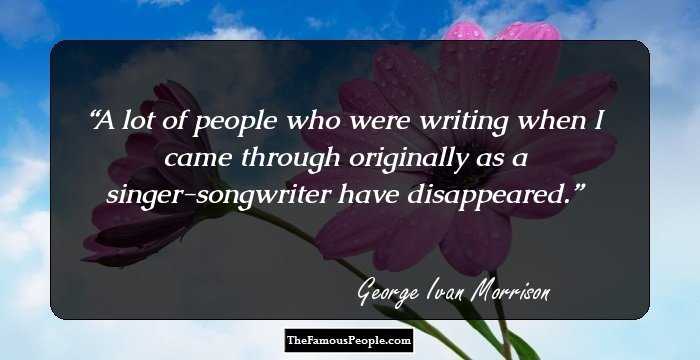 British Singers
British Musicians
Virgo Rock Singers
Male Folk Singers
Major Works
In 1970, Van Morrison released his third solo album titled ‘Moondance’ that became his first album to sell over a million copies. It went on to peak at #29 on the US Billboard Albums chart. The album featured positive and cheerful music which was liked by the audience. Its track "Into the Mystic" also became a huge hit.
In 1978, the Irish singer released his album ‘Wavelength’ that soon went gold and became one of the fastest-selling albums of that time. Its opening single "Kingdom Hall" evoked his childhood experiences of religion and spirituality with his mother.
Recommended Lists:

British Rock Singers
British Folk Singers
Northern Irish Singers
British Record Producers
Personal Life
Van Morrison was once married to Janet Rigsbee. The couple had a daughter, Shana Morrison, before divorcing in 1973.
He met Irish socialite Michelle Rocca in the early 1990s. They got married and had two children. The couple divorced in 2018.
In 2009, Morrison's tour manager Gigi Lee gave birth to a son and claimed that the baby’s father was Morrison. The baby died of an illness in 2011.
In August 2014, he established a "Van Morrison Trail" in partnership with Connswater Community Greenway in East Belfast. 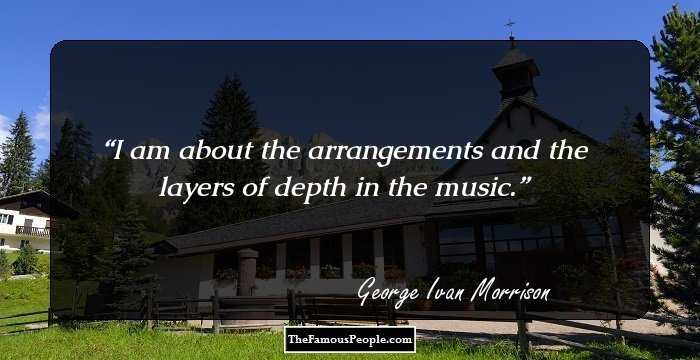 Quotes By Van Morrison | Quote Of The Day | Top 100 Quotes

See the events in life of Van Morrison in Chronological Order