Tracy Letts is an American screenwriter, playwright, and actor best recognized for his contribution to the play ‘August: Osage County’ for which he received a Drama Desk Award, a Tony Award, and the 2008 Pulitzer Prize for Drama. He is also known for his role of Andrew Lockhart in the 3rd and the 4th seasons of Showtime's ‘Homeland’ as well as for playing George in the Broadway revival of ‘Who's Afraid of Virginia Woolf?’ Born to a college professor cum actor father and an author mother, Letts was raised in Durant, Oklahoma, in an atmosphere where creativity was encouraged and fostered. He graduated from Durant High School and briefly attended Southeastern Oklahoma State University. Inspired by his father, he decided to quit studies in order to pursue acting. He did a handful of odd jobs before moving to Chicago where he finally landed acting jobs. Beginning his career in theater, he eventually ventured into the television and film industries as well. He achieved much success as both a playwright and an actor. On the personal front, Letts is married to actress Carrie Coon and is a father of one child. 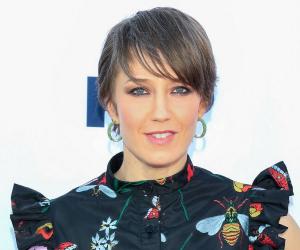 Ryan Reynolds
Actors #1501
Playwrights #38
Screenwriters #173
DID WE MISS SOMEONE?
CLICK HERE AND TELL US
WE'LL MAKE SURE
THEY'RE HERE A.S.A.P
Quick Facts

awards: Pulitzer Prize for Drama
Tony Award for Best Actor in a Play

American People
Playwrights
American Men
Oklahoma Actors
Tall Celebrities
Childhood & Early Life
Tracy Letts was born on July 4, 1965 in Tulsa, Oklahoma, the USA. He has two brothers, Dana and Shawn, a musician.
His mother Billie Letts was a best-selling author who had also served as a professor at the Southeastern Oklahoma State University. His father Dennis Letts was an actor and college professor. Dennis had also served in the United States Air Force until 1956. He died on February 22, 2008 from lung cancer.
Tracy Letts graduated from Durant High School and then moved to Dallas, where he worked as a waiter and also took up a job in a telemarketing company. He eventually moved to Chicago to begin his acting career.
Continue Reading Below
You May Like

The Best Black Actresses Of All Time
Career
Tracy Letts began his acting career at the age of 20 when he started working at Steppenwolf Theater Company. He then founded Bang Bang Spontaneous Theater with Greg Kotis, Michael Shannon Paul, Amy Pietz and Dillon.
In 1991, he wrote the play ‘Killer Joe’. A year later, he starred as Sean in the movie ‘Straight Talk’. Soon after this, he appeared in the play ‘Picasso at the Lapin Agile’ (1994).
In 1995, Letts appeared in an episode of ‘Home Improvement’. The following year, he wrote the play ‘Bug,’ which was adapted into a feature film later on. During 1996 and 1997, he starred in two episodes of ‘Early Edition’ and one episode of ‘Seinfeld’.
He played Sheriff Poe in the flick ‘U.S. Marshals’ in 1998. The film was a spin-off to the motion picture ‘The Fugitive’ which had been released in 1993. In 1999, the actor cum playwright got featured in an episode of ‘Judging Amy’. That year, he also acted in the film ‘Guinevere’ as well as in the play ‘Three Days of Rain’.
In the year 2001, he performed in the play ‘Glengarry Glen Ross’ and made guest appearances in the TV programs ‘Strong Medicine’ and ‘The District’. A year later, he acted in the plays ‘The Dazzle’ and ‘Miracle on 34th Street’.
Letts wrote the play ‘Man from Nebraska,’ which premiered in Chicago in 2003. In 2004 and 2005, he performed in the plays ‘The Dresser’, ‘Last of the Boys’, ‘Orson's Shadow’ and ‘The Pain and the Itch’.
He had a minor role in two episodes of the series ‘Prison Break’ in 2006. That year, he also wrote the screenplay for the flick ‘Bug’ which was based on his own play of the same name. The American artiste also acted in the plays ‘The Pillowman’ and ‘The Well-Appointed Room’ the same year.
In the ensuing years, he appeared in the plays ‘Betrayal’ and ‘American Buffalo,’ and also wrote the plays ‘Superior Donuts’ and ‘Three Sisters’.
He worked as a writer for the movie ‘Killer Joe’ (2012), adapted from his own play of the same name. From 2013 to 2014, Letts played Senator/Director Andrew Lockhart in the series ‘Homeland’. During this time, he also appeared in the stage production of ‘The Realistic Joneses’.
In the mid-2010s, the American artiste had been associated with a lot of projects. He wrote a handful of plays including ‘The Stretch’, ‘Mary Page Marlowe’, ‘Linda Vista’ and ‘The Minutes’. He also appeared in a number of movies like ‘The Big Short’, ‘Christine’, ‘The Lovers’, ‘Indignation’, ‘Lady Bird’ and ‘The Post’. In 2016, Letts began playing Nick in the comedy series ‘Divorce’.
Major Works
In 2006, Tracy Letts played the role of George in the play ‘Who's Afraid of Virginia Woolf?’ Written by Edward Albee, the play examines the complexities of the marriage between two characters, Martha and George. In 2012, Letts again appeared in the play’s 50th Anniversary Broadway revival as originally presented by Steppenwolf Theater Company. His performance in the play earned him the 2013 Tony Award for Best Performance by a Leading Actor in a Play.
Letts wrote the play ‘August: Osage County’. This comedy-drama premiered at the Steppenwolf Theater in Chicago in June 2007 and closed in August. It had its Broadway debut at the Imperial Theater in December 2007. The play was a huge hit and garnered numerous awards and accolades.
The play ‘August: Osage County’ went on to earn the 2008 Drama Desk Award for Outstanding Play as well as the 2008 Tony Award for Best Play. The play also earned Tracy Letts the 2008 Pulitzer Prize for Drama. It was later developed into a movie of the same name.
Personal Life
Tracy Letts married actress Carrie Coon in 2013. His wife is best known for playing Nora Durst in the HBO drama ‘The Leftovers’ from 2014 to 2017. She is also recognized for her work on the stage in numerous plays, the most popular one being ‘Mary Jane.’
Recommended Lists:
Writers #253
Film & Theater Personalities #3326
You May Like

See the events in life of Tracy Letts in Chronological Order