Advanced Search
Trace Adkins is a country musician who first came to limelight with his debut single ‘There’s a Girl in Texas’. The remarkable success of his very first venture led him to come up with an album, ‘Dreamin’ Out Loud’ which was a major hit at the charts. In his almost about two decades long career, he has come up with seven studio albums and two ‘Greatest Hits’ compilations. While most of his singles have ranked at the Billboard country music charts, it was his 1997 released single, ‘No Thinkin’ Thing’, the 2007 single ‘Ladies Love Country Boys and the 2008 single, ‘You're Gonna Miss This’ which peaked at number one. Other than being a celebrated country musician, he has had his share of acting limelight with guest appearances and supporting roles in various television shows and films. Furthermore, he was the winner of the 2013 ‘The Celebrity Apprentice’. American People
American Men
Louisiana Actors
Tall Celebrities
Tall Male Celebrities
Childhood & Early Life
Trace Adkins was born on January 13, 1962 to Aaron Adkinsand Peggy Carraway in Sarepta in Webster Parish in north Louisiana. His father was a mill worker.
Young Adkins took to music at an early age. His father taught him the basics of playing guitar during his childhood. This musical training embedded in him the seed of a musical career.
He completed his formal education from a high school where he was a member of the gospel group, New Commitments. Furthermore, he was also a member of the Future farmers of America.
Completing his basic education, he enrolled at the Louisiana Tech University. At the university, he played in the defensive end for the Bulldogs football team. 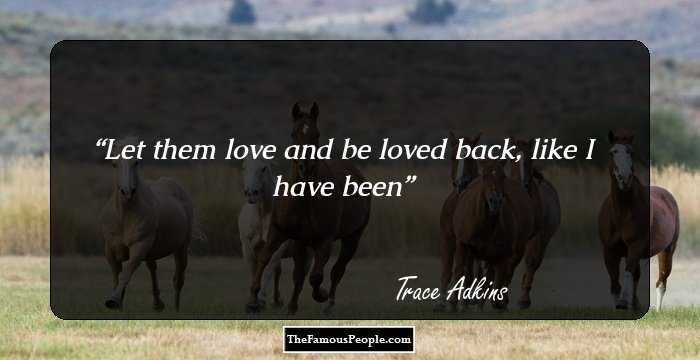 Quotes: Love, Like, I
Continue Reading Below
Career
Before even completing his graduation, he took up work at an oil rig. However, unfortunately, he lost his little finger in an accident while opening a bucket with a knife. Unperturbed, he asked the doctor to join the finger in such a way that he could continue playing the guitar.
He spent the early years of 1990s playing in the honky tonk bars in and around Nashville, Tennessee. It was during these years that he was spotted by an executive of Capitol who signed him to the label.
Year 1996 was a breakthrough one for this talented musician as he made a debut with his single, ‘There’s a Girl in Texas’. The song was a major hit and topped the Billboard Hot Country Singles & Track charts at the 20th position.
Following the super success of his debut song, he released his debut album ‘Dreamin’ Out Loud’ later in 1996. The album replicated the success of his debut song track as it became a super hit with his singles reaching the number 1 status.
Inspired by the success of his debut album, he released his second venture, titled, ‘Big Time’. Except for a single track, ‘The Rest of Mine’, which reached the Top 5 position, the album could not carry forward the super success his previous album had achieved.
In 1999, he released his third album, ‘More…’. The fate of the album was much like its predecessor, except the title track and the album failed to achieve the gold status.
Following an accidental mishap, he released his fourth album, ‘Chrome’ in 2001. It became the first album to reach the Top 5 status on the country album charts with its title track being listed in the Top 10.
He followed this up with two albums in 2003, a Greatest Hits collection and ‘Comin’ on Strong’. While the former produced one single ‘Then They Do’ the latter produced two, ‘Hot Mama’ and ‘rough & Ready’ both of which peaked at No 5 and No 13.
In 2003, he did voiceover for a commercial series for KFC. He even made his debut in television starring in the role of Big John for the television series, ‘King of the Hill’. He also made an appearance on ‘Hollywood Squares’
Continue Reading Below
In 2004, he starred as Curtis, a prison convict in the television series, ‘Yes, Dear’. Additionally, he played the character of Elvin Mackleston in the series, ‘King of the Hill’.
Going back to his singing career, in 2005, he released the album, ‘Songs About Me’. While its first single, ‘Arlington’ created controversy, its second single, ‘Honky Tonk Badonkadonk’ became a huge crossover hit. For the first time, his song was featured in the Top 40 of the Billboard Hot 100.
In 2005, he starred in three television series, ‘Higglytown Heroes’, ‘Blue Collar TV’ and ‘My Name is Earl’.
Year 2006 witnessed the release of his seventh studio album, ‘Dangerous Man’. While the first single, ‘Swing’ peaked at No.20, the second ‘Ladies Love Country Boys’ became the Number 1 single on the country charts. This was the second time after the 1997 released single ‘No Thinkin’ Thing’ that his song reached the number one status.
In 2007, he came up with the single, ‘I Got My Game On’ the song, supposedly to be the flagship song of a new album, instead became the lead track for his second Greatest Hits compilation, ‘American Man: Greatest Hits, Vol. 2’.
He then released the second single from the album, ‘You’re Gonna Miss his’. The song reached the number one status on the Hot Country Songs and became the fastest climbing single of his. It furthermore, went on to enlist itself at the Top 12 in the Billboard Hot 100 and Top 19 in the Billboard Pop 100. At the Hot Digital Songs track, it peaked at number 8.
In 2007, he released his first book, ‘A Personal Stand: Observations and Opinions from a Free Thinking Roughneck’.
In 2008, he starred in the big screen, playing the role of ‘The Man’ in the film, ‘Trailer Park of Terror’ and Angel of Death in ‘An American Carol’. He also starred in one of the episodes of the television series ‘The Young and the Restless’.
From 2008 to 2011, he starred in 16 episodes of the television show, ‘Celebrity Apprentice’. In the first season, he played as a celebrity contestant finishing off 2nd.
Continue Reading Below
In 2008, he released the single, ‘Muddy Waters’ from the album ‘X’. The album included the Top 20 hits ‘Marry for Money’ and ‘All I Ask For Anymore’, both of which peakedat No. 14.
In 2010, he left Capitol Nashville to sign a contract with Show Dog Universal Music. His first song from the label, ‘This Ain’t No Love Song’ was released in May 2010. The song typified as the head track for his subsequent studio album, ‘Cowboy’s Back in Town’. The album debuted at the No 54 position on the charts.
In 2010, he came up with his third compilation album, ‘The Definitive Greatest Hits Til’ The Last Shot’s Fired’. He has also sung the National Anthem at Dallas Cowboys Stadium. His films and television appearances include, ‘Lifted’, ‘Tough Trade’ and ‘Ace of Cakes’
In 2011, he came up with his tenth studio album ‘Proud to Be Here’. The same year, he starred in the film, ‘The Lincoln Lawyer’ as Eddie Vogel.
In 2013, he released two albums, ‘Love Will..’ and his first Christmas album, ‘The King’s Gift’. He also came up with his compilation album ‘Icon’. The same year, he starred as himself in the 12 episodes of ‘All Stars Celebrity Apprentice’ wherein he made it to the finals and ended up winning the same. 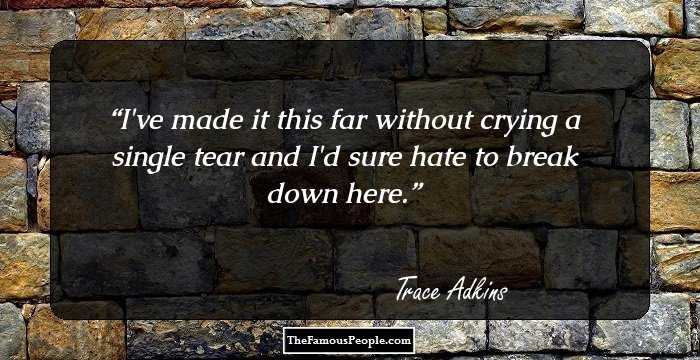 Awards & Achievements
In 1996, he was presented with the ACM Top New Male Vocalist award.
In 2003, he was inducted into the Grand Ole Opry.
His single, ‘You’re Gonna Miss This’ was twice nominated in the Grammy in the categories of Best Male Country Vocal Performance and Best Country Song in 2008. The same year, he won CMT Male Video of the Year for the track, ‘I Got My Name On’.
In 2009, he won the Acm Single of the Year for ‘I Got My Name On’. He was again twice nominated in Grammy for his track, ‘’All I Ask for Anymore’.
In 2010, he won the ACM Vocal Event of the Year and CMT Collaborative Video of the Year Award with Blake Shelton.
Personal Life & Legacy
He has thrice been in wedlock. Presently, he is married to his third wife, Rhonda Forlaw.
He has fathered five daughters, two from his ex-wife, Tarah and Sarah and three from his current wife, MacKenzie, Brianna, and Trinity.
He is a Republican supporter.
Trivia
This American musician’s pinkie finger on his left hand is permanently crooked to fit around the neck of a guitar.

See the events in life of Trace Adkins in Chronological Order