Tony Curtis is one of the few iconic actors of the 1900s, who went on to earn a reputation of being a path-breaking performer through the roles he had essayed. Unlike many of his Hollywood contemporaries, this actor had to deal with a scarred childhood. The generosity of a neighbor helped Tony complete his education and since then, there was no looking back for this talented man. Thanks to his good-looks, Curtis landed in Hollywood, without much struggle, when he was in his early twenties. After a couple of blink-and-miss appearances, Tony mesmerized audiences and critics with his role in the film ‘Some Like it Hot’. Not only did he get an opportunity to work with the charismatic Marilyn Monroe in this flick, but the film also helped him gain a nomination for an Academy award. The actor since then has starred in dozens of movies and even quite a few television series. He has also been in news for philanthropic activities such as renovating a historic monument in Budapest, Hungary and many others. A couple of years before his death, Tony’s autobiography was released. The insight he provided about the world of cinema made it a favorite among readers.

Evan Peters
3rd June In History
DID WE MISS SOMEONE?
CLICK HERE AND TELL US
WE'LL MAKE SURE
THEY'RE HERE A.S.A.P
Quick Facts

American Celebrities
American Men
New Yorkers Actors
Gemini Actors
American Actors
Childhood & Early Life
Tony Curtis was the eldest of the three children born to Emanual Schwartz and Helen, on June 3rd 1925. He was originally named Bernard Schwartz, by his parents.
His father, who was of Hungarian descent made ends meet by running a tailor shop. Curtis had once complained that his mother often punished him in a harsh manner. Tony's parents left him and his siblings at an orphanage for a month since their financial constraint couldn't let them feed the kids.
He was then rescued by a person who stayed in his neighborhood and got him admitted to an institution named 'Seward Park High School'. It was at school, that Curtis experienced his first acting stint, by participating in a play.
The young man became a part of the 'Pacific Submarine Force', a division of the American Navy. The movies 'Crash Dive' and 'Destination Tokyo' inspired him to do so.
After his brief stint with the defense force, Tony continued his education by joining the 'City College of New York'. He then tried fine tuning his acting skills by being a student of 'The New School', where he was mentored by a playwright named Erwin Piscator.
During his student days, Tony grabbed the attention of a renowned casting director named Joyce Selznick, who felt that he could be considered for important roles in films. 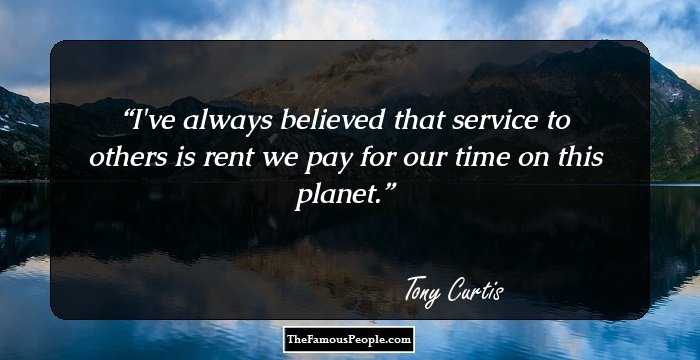 Quotes: Time
Continue Reading Below
Career
Curtis got an opportunity to work with the renowned banner 'Universal Pictures' when he was 23 years old. He was trained in sports like riding and fencing during his initial days with the banner.
Curtis made his debut through the 1949 flick 'Criss Cross', in a blink-and-miss role of a rumba dancer. The same year, he also appeared in the flick 'City Across the River', where his name in the credits was mentioned as 'Anthony Curtis'.
However, it was his role of Sidney Felco in the 1957 movie 'Sweet Smell of success' which helped him establish a strong foothold in the world of cinema.
His next movie, titled 'The Defiant Ones', which released in 1958, turned out to be a huge success. Curtis' role of Sidney Polter was even nominated for the prestigious academy award.
The very next year saw the release of his comedy, titled 'Some Like it Hot'. Curtis had shared screen space with the legendary actress Marilyn Monroe in this 1959 film.
The actor is famous amongst movie buffs even today for his role in iconic director Stanley Kubrick's, 1960 film, titled 'Spartacus'.
During the 1960's, he appeared in a string of successful films such as 'The Outsider', 'Taras Bulba', 'Sex and the Single Girl', 'The Great Race' and 'The Boston Strangler'.
While he was appreciated for his portrayal of the character Bob Weston in 'Sex and the Single Girl', his character 'The Great Leslie' in 'The Great Race' was also equally well-applauded.
Curtis also ventured into television in 1971 with the action/adventure series 'The Persuaders'. This hit television show also co-starred the legendary Hollywood actor Roger Moore.
Continue Reading Below
During the rest of the 1970's Tony starred in many other flicks like 'The Last Tycoon', 'Casanova & Co', 'Sextette', 'London Conspiracy' as well as 'The Count of Monte Cristo'.
Although his popularity had declined by the 1980s, he managed to grab roles in many other films of the time. Apart from fictional movies, Curtis even worked in a documentary titled 'The Fantasy Film Worlds of George Pals' in 1985.
His other prominent works during the 1980's include 'Where is Parsifal', 'Murder in three acts' and the German flick titled 'The Passenger- Welcome to Germany'.
His last work as an actor was the documentary titled 'The Jill & Tony Curtis Story', which released in 2008. 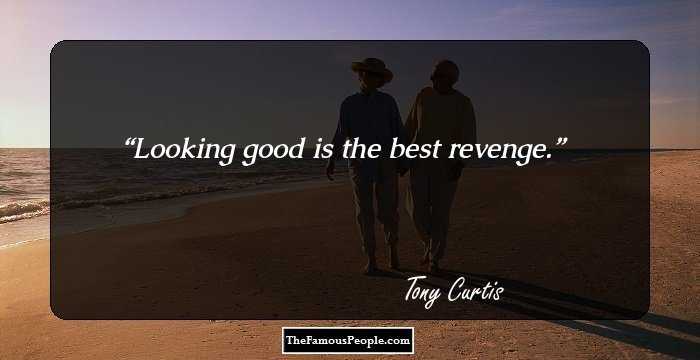 Major Works
Although he has won awards for several other films, the actor is famous amongst movie buffs even today for his role in iconic director Stanley Kubrick's 1960 film, titled 'Spartacus'. The actor's portrayal of the slave named Antoninus was well-appreciated by the critics as well as audiences.
Awards and Achievements
This famous actor was nominated for an Academy award for his role in the 1958 flick 'The Defiant Ones'.
He was also nominated for a 'Henrietta Award' on two occasions in the 'World Film Favorite' category.
Curtis won a nomination in the 'Best Motion Picture Actor' category during the 1969 'Golden Globe' award ceremony.
Continue Reading Below
He has bagged the 'Bambi Awards' four times, he received two of these for his roles in films 'Some Like it Hot' and 'The Defiant ones'.
This iconic actor was honored with a 'Sony Ericsson Lifetime Achievement Award' in 2006, for his contribution towards films. 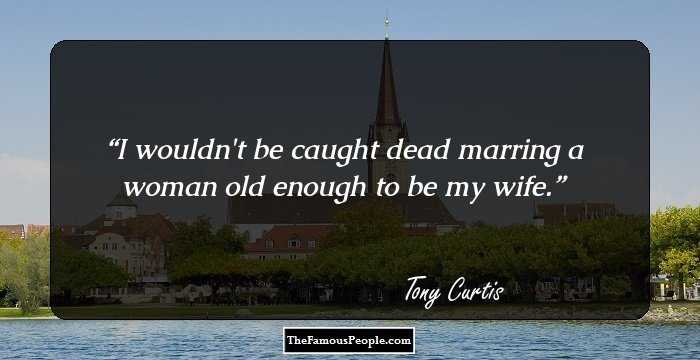 Quotes: I
Personal Life & Legacy
The actor was first married to a yesteryear actress named Janet Leigh with whom he had two daughters, namely Jamie Lee Curtis and Kelly. Both his children later went on to become renowned actresses.
After parting ways with Janet, he entered the wedlock with Christine Kaufmann, Leslie Allen, Andrea Savio, Lisa Deustch and Jill Vandenburg Curtis.
Curtis tried revamping the historic 'Great Synagouge' monument, along with his daughter and actress Jamie Lee Curtis during the early 1990's.
He was honored by the 'University of Nevada, Texas' in 2004 for his contribution towards cinema by allotting him a place in their hall of fame.
The year 2008 saw the release of his autobiography titled 'American Prince: A Memoir'. He had spoken in length about his scarred childhood, his first few days at Hollywood and the rapport he shared with other great actors of his time.
Tony was also diagnosed with 'Chronic Obstructive Pulmonary Disorder' (COPD) in July, 2010. This acclaimed actor succumbed to a cardiac arrest on September 23rd, the same year; he was around 85 years old at the time of his death.

See the events in life of Tony Curtis in Chronological Order