Thomas Fahr Steyer is an American billionaire hedge fund manager, who is the founder and former co-senior managing partner of Farallon Capital and the co-founder of OneCalifornia Bank (now Beneficial State Bank). He is also a renowned activist, philanthropist, and environmentalist, who set up NextGen America, an environmental advocacy non-profit political action committee with a progressive manifesto. A Manhattan native, Steyer grew up in an affluent family. He graduated from Yale University summa cum laude in economics and political science and later successfully pursued an MBA degree at Stanford Business School. In 1979, he started his professional career at Morgan Stanley. After getting his MBA degree, Steyer landed a job at Goldman Sachs. In 1986, he established Farallon Capital, the investment firm that helped him acquire most of his wealth. He has also served as a partner and member of the Executive Committee at Hellman & Friedman since that year. In 2012, he resigned from his position at Farallon and subsequently sold all his shares in the company to focus on political and environmental issues, on which Steyer holds deeply liberal views. He has been an active Democrat since the 1980s and in 2012, delivered his now famous speech at Democratic National Convention. He was at the forefront of the campaign to impeach President Donald Trump. Steve Eisman
DID WE MISS SOMEONE?
CLICK HERE AND TELL US
WE'LL MAKE SURE
THEY'RE HERE A.S.A.P
Quick Facts

American People
American Men
Yale University
Stanford University
American Bankers
Childhood & Early Life
Born on June 27, 1957, in Manhattan, New York, Tom Steyer is one of the three sons of Marnie (née Fahr) and Roy Henry Steyer. His father was a lawyer, who became a partner at the New York-based law firm Sullivan & Cromwell, while he mother was an educator who, at one point, taught remedial reading at the Brooklyn House of Detention.
Steyer’s two brothers are James “Jim” Pearson Steyer, a civil rights activist, child advocate, educator, and author, and Hume Steyer, a partner at Seward & Kissel LLP.
Hailing from an affluent family, he received unarguably the best education that money could buy. He began his student life at Buckley School in New York City and went on to enrol at Phillips Exeter Academy, a co-educational boarding school located in Exeter, New Hampshire.
Following his graduation, Steyer began attending Yale University in 1975, pursuing degrees in economics and political science. He then enrolled at Stanford Business School from where he received his Master of Business Administration (MBA).
Continue Reading Below
Corporate Career
After graduating from Yale summa cum laude, Tom Steyer began working at Morgan Stanley in 1979. This was his first job in the banking sector. He worked there until 1981 and then began attending Stanford for his MBA degree.
When he graduated, he found employment as an associate in the risk arbitrage division of Goldman Sachs. He was there from 1983 to 1985, primarily involved in mergers and acquisitions.
Steyer left Goldman Sachs after he got the offer to be a member of the Executive Committee at the San Francisco based private equity firm, Hellman & Friedman.
He left Hellman & Friedman in 1986, and after taking $15 million in seed capital, he founded Farallon Capital Management and set up its headquarters in San Francisco. Within 25 years of its inception, the high-performance hedge fund has become one of the largest in the industry. In 2011, its market value was measured at $21 billion.
At present, the firm has a second office in the US. In order to serve their east coast clients, the firm set up an office in New York. They expanded its operation beyond the US border as well. It has offices in Singapore, Hong Kong, Tokyo, and London.
Steyer is popular in the industry, even several years after retirement, for his maverick approach to his profession. He garnered a reputation for taking high risks on distressed assets within volatile markets.
In 2007, Steyer, along with his wife, set up OneCalifornia Bank and OneCalifornia Foundation with $22.5 million as capital. The bank holds true to the notion of “triple bottom line”. These are: maintain a profit margin, encourage environmental sustainability, and increase economic opportunity in underserved communities. Neither Steyer nor his wife takes any portion of the profit. Instead, all the profits are reinvested into the community.
The bank serves as the source of the funds that are used to perform the charitable and educational activities that primarily support the goals of the bank. They seek to put a stop to financial discrimination, promote affordable housing, decrease economic distress, usher in community development, and community financial stability.
In August 2010, the bank underwent a merger after they bought ShoreBank Pacific, a Washington-based community bank. After this, the bank was renamed as Beneficial State Bank.
Continue Reading Below
In October 2012, Steyer resigned from his position at Farallon Capital to devote himself as an ardent advocate for clean energy. He then made the decision to let go of all his carbon-polluting investments. However, his critics state that this disposal did not come soon enough. They estimate that the facilities he had provided the funds for would last until 2030.
He has also drawn criticism for his investments in the coal industry from both the conservatives and liberals. Many conservative outlets have pointed out that Steyer has made his fortune by predominantly investing in the coal industry and dubbed him a “hypocrite”.
The New York Times, in an article published in 2015, revealed that Farallon Capital has invested in multiple coal companies and after the said companies received the loans, they have managed to extend their coal production by 70 million annually. Furthermore, the article also noted that Steyer’s company is still involved with the Maules Creek coal mine.
UnFarallon, a left-leaning student activist group, has been one of the most vocal critics of the investment firm. The news of Farallon Capital’s investments in private prisons became public in 2016.
The SEC filings reported that Farallon Capital bought nearly $90 million of Corrections Corporation of America stock (5.5% of the company's outstanding shares) while Steyer was still leading the company.
Steyer has produced the 2009 drama ‘La Mission’, starring Benjamin Bratt and Alex Hernandez. He has served as an executive producer on the documentary films ‘Becoming Bulletproof’ (2014) and ‘Dolores’ (2017) and as a co-producer on the documentary TV series ‘Years of Living Dangerously’ (2016).
Philanthropic Works
Tom Steyer and his wife set up OneRoof in 2006. It is a business initiative that seeks to introduce technology to rural India. They also set up the TomKat Ranch in Pescadero, California, near Half Moon Bay, which serves as a place for research and demonstration of sustainable ways of farming. Around 2011, he became a member of the board of Next Generation, a non-profit initiative focused on solving various children’s and environmental issues and went on to establish NextGen America.
Steyer started his initiative for policies that would encourage income equality, Fair Shake Commission on Income Inequality and Middle Class Opportunity, in August 2015.
Politics

Tom Steyer has always held leftist, progressive political views and since the 1980s, has been a supporter of the Democratic Party. He first became involved in politics in 1983, when he served on Walter Mondale's presidential campaign.

During the 2008 Democratic Party presidential primaries, he initially supported Hillary Clinton but later emerged as one of Barack Obama’s biggest fundraisers. Following Obama’s victory in the presidential election, Steyer was in the consideration as the potential Secretary of Treasury and in 2013, as the potential Energy Secretary.

He worked with former Secretary of State and Republican George Shultz as co-chairs of the No on Prop. 23 campaign. Despite his own investment of $5 million, the campaign lost.

In 2012, he delivered a speech at the Democratic National Convention. Steyer actively campaigned against the Keystone XL pipeline project, even giving a speech at a rally with thousands in attendance.

He backed Hillary Clinton during the 2016 US presidential election. During this period, there was a speculation that he might run in the 2018 California gubernatorial election.

In October 2017, Tom Steyer invested about $10 million in a campaign that sought to impeach the current US President, Donald Trump. The campaign renewed the speculations of Steyer running for the office of the President of the United States.

In February 2020, he withdrew from the race and endorsed Joe Biden’s candidacy. Biden went on to defeat the incumbent President Donald Trump.

Awards
In 2011, Tom Steyer received the Phillip Burton Public Service Award of Consumer Watchdog.
He was the recipient of the Environmental Leadership Award of the California League of Conservation Voters in 2012.
In 2013, Steyer won the Environmental Achievement Award of the Environmental Law Institute.
Continue Reading Below
In 2015, the Open Space Institute awarded him the Land Conservation Award.
“For his work advancing progressive causes that benefit the LGBT community”, Steyer was awarded the Equality California's 2015 Humanitarian Award.
Steyer was the winner of the Advocate Award of the Environmental Advocates of New York in 2016.
Personal Life
Tom Steyer has been married to his wife, Kathryn “Kat” Ann Taylor, since August 1986. A Harvard graduate, Taylor received her J.D./M.B.A from Stanford. The wedding was officiated by Rev. Richard Thayer, a Presbyterian minister, and Rabbi Charles Famila. They have four children together, three sons, Samuel Taylor ("Sam"), Charles Augustus ("Gus"), and Henry Hume ("Henry"), and a daughter, Evelyn Hoover ("Evi”).
Like her husband, Taylor is highly active as a philanthropist and liberal activist. She was a member of the President’s Council for the United Religions Initiative that seeks to “promote enduring, daily interfaith cooperation, to end religiously motivated violence, and to create cultures of peace, justice and healing for the Earth and all living beings."
Steyer is deeply religious and is a member of the Episcopal Church, adopting his mother’s religion. His father was a non-practising Jew. He has stated that his concern for the environment grew alongside his Christian faith.
He regularly draws the sign of the cross on his hand with a ballpoint pen and is involved with various charities and fundraisers. In 2010, he and his wife joined The Giving Pledge, promising that they would give away half of their fortune during their lifetime.
Despite having a net worth of $1.6 billion, Steyer leads a relatively inconspicuous and simple lifestyle. Most things that people generally associate with wealth are apparently inconsequential to him.
He drives a hybrid Honda Accord and is often seen wearing a Timex Ironman watch with a Velcro band. What he refers to as his “briefcase” is really a worn-out canvas bag!
Trivia
Steyer has often been cited as the progressive and liberal version of the infamous Conservative activists and fundraisers, the Koch brothers.

See the events in life of Tom Steyer in Chronological Order 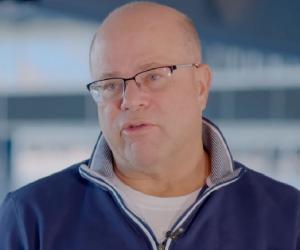