Tom Lehrer, born as Thomas Andrew Lehrer, is an American singer-songwriter and mathematician. He is known for his dark humour and satire. As a singer he often parodied popular songs and wrote controversial lyrics dealing with the social and political issues of his times. As a child, he used to receive classical piano lessons but gradually his interest shifted towards pop music. He began writing songs and tunes from a young age. Lehrer was a brilliant student; he earned his AB in mathematics from Harvard University at the age of 19 and his master’s degree the next year. He was inducted into Phi Beta Kappa Society—an academic honor society in the United States, which aims to promote and advocate excellence in the liberal arts and sciences—and taught at MIT, Harvard and Wellesley. He was a confident man who spoke his mind and never worried about political correctness. His songs often created controversy due to their dark, macabre and satirical nature, but he never bothered. He started writing funny songs while in college to amuse himself and his friends though he had no plans to become a musician. But his friends who greatly enjoyed his parodies and comic songs encouraged him to record them. Thus, he recorded his first album, ‘Songs by Tom Lehrer’ under his own label Lehrer Records in 1953. Lehrer was a comic paradox who successfully managed two seemingly unrelated careers—one as a mathematician, the other as a musician. Billie Eilish
Mathematicians #63
Scientists #166
Musicians #995
9th April In History
DID WE MISS SOMEONE?
CLICK HERE AND TELL US
WE'LL MAKE SURE
THEY'RE HERE A.S.A.P
Quick Facts

American People
Musicians
Mathematicians
American Men
New Yorkers Musicians
Childhood & Early Life
Tom Lehrer was born into an American Jewish family in Manhattan. Little is known about his parents except for the fact that they divorced when he was 14.
He studied classical piano from a young age though later on his interest shifted to pop music and he began taking lessons from a piano teacher who specialized in pop-music. Soon he began composing funny songs and tunes.
He was a brilliant student who skipped several grades and graduated from Horace Mann School, New York at the age of 15. He enrolled in Harvard University from where he obtained AB as well as Master’s degrees in mathematics. He began writing funny songs as an undergraduate student to entertain his friends. 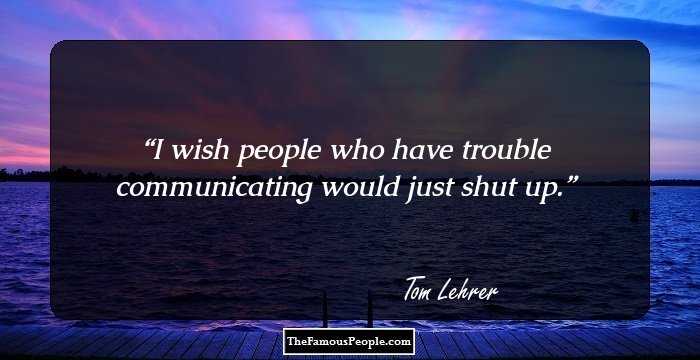 Who Is The Most Popular BTS Member?
Career
He joined Harvard’s doctoral program and worked as a researcher at the Los Alamos Scientific Laboratory. He then became an educator and taught classes in many universities and colleges like MIT, Harvard, University of California, etc.
His music career began in 1953 when he self-released his first album, ‘Songs by Tom Lehrer’ under his own label Lehrer records. The graphic and comic nature of his songs ensured that he soon got a cult following.
He served a short stint in the U.S Army from 1955 to 1957 and returned to Harvard to teach and to complete his PhD. However he could not obtain his doctorate in mathematics.
Lehrer recorded a live album, ‘An Evening Wasted with Tom Lehrer’ in 1959 in Sanders Theater at Harvard. It included songs with shocking lyrics like ‘Poisoning Pigeons in the Park’ and’ The Masochism Tango.’
He released another album, ‘More of Tom Lehrer’ in 1959. It had the same track listing as his previous album. He issued both the live and studio versions at the same time.
His next album, ‘Tom Lehrer Revisited’, released in 1960, was a collection of live recordings of all the songs from his 1953 album ‘Songs by Tom Lehrer.’ In the 1960s, he also wrote songs for the U.S version of the U.K T.V news program ‘That Was the Week That Was.’
The songs he wrote in the 1960s were increasingly becoming more political and dealt with topics such as war, religion, racism, pollution, etc.
In 1965, after a gap of six years, he released an album of songs he wrote for the show ‘That Was the Week That Was’, titled ‘That Was the Year That Was.’
He made a short tour of Norway and Denmark in 1967 where he performed some of his songs. At around the same time, he composed and played original songs on piano for a Dodge automobile industrial film.
Continue Reading Below
By the 1970s, Lehrer almost gave up his music career to concentrate on his teaching. Still, he wrote some songs for a children’s educational T.V program, ‘The Electric Company’ at the request of a friend.
In 1972, he became a teacher of mathematics and musical theater at the University of California.
After serving there for 29 years, he taught his last mathematics class in 2001, and has since been enjoying his retired life. 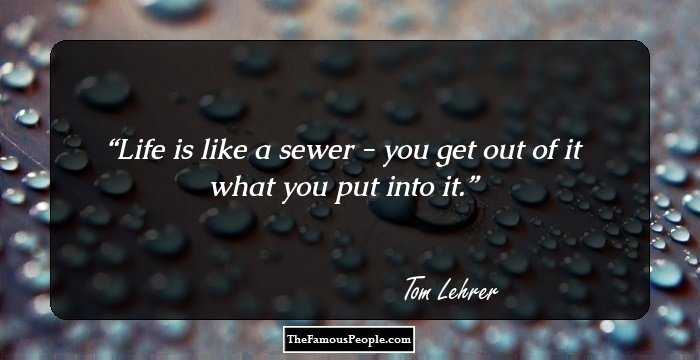 Quotes: You, Life, Like
Major Works
His debut album, ‘Songs by Tom Lehrer’ (1953), self-produced and self-released, managed to attract enough attention that Lehrer acquired a cult following. It featured the hit ‘Fight Fiercely, Harvard’, a satirical song that he originally wrote as a student at Harvard.
The live album ‘An Evening Wasted with Tom Lehrer’ was recorded by him in Sanders Theater in 1959. It included songs full of dark humour and macabre, like ‘Poisoning Pigeons in the Park’, ‘The Elements’ and ‘Clemetine’ which shocked, as well as thrilled the listeners.
‘That Was the Year That Was’ (1965) was his only album to be accredited Gold by the Recording Industry Association of America (RIAA). It was a collection of songs that Lehrer originally wrote for the T.V program ‘That Was the Week That Was.’ The lyrics of the songs were very daring and bold.
Awards & Achievements
Tom Lehrer has not won any major award due to the unconventional and politically incorrect nature of his works. However he was nominated for the Grammy Award for Best Comedy Performance-Musical in 1961. 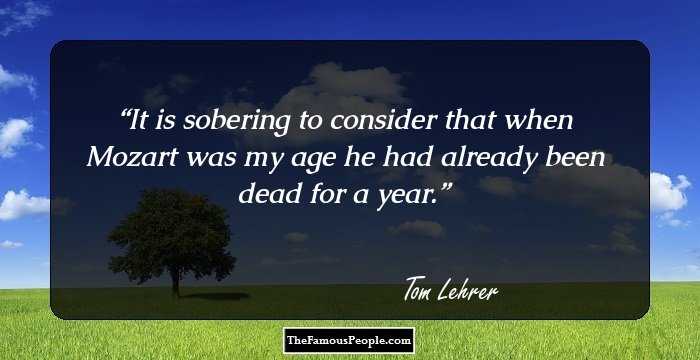 Personal Life & Legacy
Lehrer never married and has no children. Currently he is enjoying his peaceful retired life after a hectic career of juggling music and mathematics.
Trivia
His popularity received a boost when U.K’s Princess Margaret cited her musical tastes as "catholic, ranging from Mozart to Tom Lehrer."
He is a big fan of American composer and lyricist, Stephen Sondheim.
He has often been reported as “dead” in newspapers—something that he finds extremely funny and often makes a joke of.
Recommended Lists:
Singers #1236
You May Like

See the events in life of Tom Lehrer in Chronological Order