Timothy Evans was a Welshman, best remembered as a victim of a serious failure of justice. Evans, who was falsely convicted for the murder of his wife and daughter, was wrongfully executed on March 9, 1950, at ‘HM Prison Pentonville’ in London, England. Three years after his execution, John Christie was found guilty of committing the murders and Timothy Evans was granted a posthumous pardon. Interestingly, Evans had accused Christie of committing the murders during his trial. However, his accusation was not considered by the court. Evans’ case generated controversy and played a major role in the abolition of capital punishment in the UK in 1965. In January 2003, Evans’ sister Eileen Ashby and his half-sister Mary Westlake were awarded ex gratia payments by the ‘Home Office’ as compensation for the failure of justice in Evans’ case. In a film titled ‘10 Rillington Place,’ which released on February 10, 1971, Timothy Evans was portrayed by John Hurt. In 2016, Nico Mirallegro played Evans in a three-part biographical crime drama TV series titled ‘Rillington Place.’ 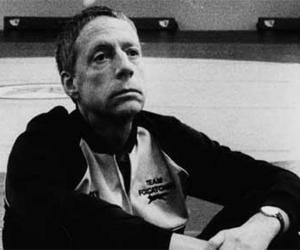 Kai Lawrence
Murderers #122
Criminals #416
DID WE MISS SOMEONE?
CLICK HERE AND TELL US
WE'LL MAKE SURE
THEY'RE HERE A.S.A.P
Quick Facts

Welsh Celebrities
Male Murderers
Male Criminals
Welsh Criminals
Scorpio Criminals
Childhood & Early Life
Timothy John Evans was born on November 20, 1924, in Merthyr Tydfil, Glamorgan, Wales, to Thomasina and Daniel. Evans had a difficult childhood as his father abandoned the family even before his birth. He and his older sister Eileen were raised by their mother who remarried a man named Probert in September 1933.
Evans struggled at school and had difficulty learning to speak. When he was eight years old, he developed tuberculosis verrucosa on his right foot which forced him to miss classes at school. In 1935, he moved to London along with his mother and step-father and started working as a painter while attending school.
In 1937, he returned to Merthyr Tydfil where he worked briefly in the coal mines before resigning due to the problems caused by the bacterial infection on his right foot. In 1939, he went back to London to live with his mother. In 1946, the family moved to St Mark's Road, Notting Hill, where he started working as a delivery driver.
Evans possessed low literacy skills even after reaching adulthood. Though he could read simple passages in comics and newspaper, he often relied on others while reading lengthy documents. In order to boost his self-esteem, he often made up stories about himself, a trait that hampered his efforts to establish credibility. On April 25, 1946, Evans was fined 60 shillings for stealing a car and driving without a license.
Continue Reading Below
You May Like

The Best Black Actresses Of All Time
Arrest & Execution
On November 30, 1949, Evans informed the police that he had killed his wife accidentally by giving her an unknown substance to abort the fetus with which she was pregnant. He also claimed that he had disposed of her body in a sewer drain outside his home. When police could not find the body, Evans came up with a different theory.
In his second statement, he said that his neighbor John Christie had offered to perform an abortion on his wife and that she died when the abortion went wrong. Evans also said that Christie had promised to take care of his daughter Geraldine, allowing him to stay with his relatives in Wales.
Based on his second statement, the police searched the crime scene and found the body of Evans’ wife Beryl. They also found Geraldine’s body and informed Evans about his daughter’s murder. Surprisingly, Evans confessed to having killed his wife and his daughter. His statement was cited as proof of his guilt and he was put on trial on January 11, 1950.
During his trial, Evans stated that he made a false confession fearing physical abuse by the police. He also said that John Christie was responsible for the murders. Though Evans maintained his defense throughout the trial, the court dismissed his claims. The trial lasted only three days and the jury took just 40 minutes before terming Evans guilty. On March 9, 1950, Evans was hanged to death at ‘Pentonville Prison.’
Miscarriage of Justice
Three years after Evans’ sentence, John Christie was found to be a serial killer. It was discovered that he had killed six other women, including his own wife. Before his execution on July 15, 1953, Christie confessed to having killed Evans’ wife.
In 1965, Home Secretary Sir Frank Soskice ordered an inquiry in an attempt to unearth the truth behind Geraldine’s murder. The following year, it was revealed that Evans had not killed his daughter. Subsequently, Soskice’s successor Roy Jenkins recommended a royal pardon for Evans. Public outcry over Evans’ case played a major role in the abolition of capital punishment in the UK.
In January 2003, Evans’ sister and his half-sister were awarded ex gratia payments by the ‘Home Office.’ The payments were made as compensation for the failure of justice in Timothy Evans’ case.
Family & Personal Life
Timothy Evans met Beryl Susanna Thorley in January 1947 through a common friend who had encouraged them to go on a blind date. Evans and Beryl Thorley got married on September 20, 1947, and lived at St Mark's Road with Evans' family.
In 1948, Evans and Beryl moved into a flat at 10 Rillington Place after Beryl became pregnant with her first child. On October 10, 1948, Beryl gave birth to her child, a daughter named Geraldine.
Evans and Beryl would often engage in quarrels. Beryl's inability to manage the family's finances and Evans' addiction to alcohol made things worse between them. Their arguments were loud enough to be heard by many and their neighbors witnessed physical violence between them on several occasions.
In 1949, Beryl became pregnant with her second child. However, the couple decided to abort the child as they were already struggling financially. When their neighbor Christie came to know about their plight, he offered to perform an abortion on Beryl. However, he decided to strangle her to death instead. Evans’ story was adapted into a film in 1971. Titled ‘10 Rillington Place,’ the movie was directed by Richard Fleischer. In 2016, ‘BBC’ aired a three-part crime-drama series titled ‘Rillington Place.’
You May Like

See the events in life of Timothy Evans in Chronological Order