Thomas Sanders is a YouTube star who first became popular on Vine as Foster Dawg. This ex-Viner claimed his position to fame in October 2013 when the number of his followers on Vine surpassed one million. He was best known for his career on Vine until the app was dissolved by Twitter, in 2017. After Vine was gone, Thomas shifted his full focus to YouTube, on which he had already been posting videos from earlier. He has featured a number of YouTube stars like Dodie Clark, Lilly Singh, and Grace Helbig on his channel. Apart from being a successful internet celebrity, he also performs in local theater and is serious about taking his acting career further. Sanders has been seen singing in many of his Vine and YouTube videos and has also been applauded for his singing abilities. In 2016, Thomas Sanders went on a national tour to take his Internet content to stage. He also released an album named Ultimate Story Time with Thomas Sanders that included the music from the stage shows. Gabrielle Jeane...
DID WE MISS SOMEONE?
CLICK HERE AND TELL US
WE'LL MAKE SURE
THEY'RE HERE A.S.A.P
Quick Facts

Thomas Sanders first appeared on Vine as Foster_Dawg. He gained immense popularity on Vine and by October 2013 had gained one million followers. After establishing a successful internet career, he rebranded himself as Thomas Sanders. He won the Favorite Vine Celebrity Contest in 2014, edging out Brittany Furlan. In many of his videos, he is seen impersonating Stewie from Family Guy and Stitch from Lilo & Stitch which gives these videos a funny twist.

Many of his series enjoyed great reviews form the viewers and took him to the top of his career. Series like Musicals in Real Life, Misleading Compliments, and Narrating People’s Life became hugely popular and he managed to gather 8.3 million followers on Vine in the course of time. When Twitter made it clear that it will subsequently close down Vine, Sanders declared that he will continue making Vines till the end date of the app and then he will switch to his YouTube channel on which he had been posting videos from earlier.

In his YouTube videos, he is shown in various personas to express his thoughts. His personas like Dad and Disney Prince are particularly popular amongst his followers. Currently, Thomas Sanders is a full time YouTuber but he also makes short videos for Instagram. The forceful shifting from Vine to YouTube certainly took some toll on the numbers of Thomas’s current follower base but he is looking forward to catch up soon as a change in platform has not dampened the popularity of his videos or the personas that he represents in them.

Apart from being an Internet celebrity, Thomas Sanders is also a musical theater star and he performs in various local productions. He has played different roles on stage as a theater actor and he also hopes to take his acting career to the silver screen someday. Anyone who is a follower of his past Vines or current YouTube channel must be already familiar with his songs. He has also contributed to duets like Birds and Dear Happy alongside Dodie Clark.

In 2016, he won the Streamy Award for the Viner of the Year and in 2017, right after shifting his full attention to YouTube, he was adjudged the Best YouTube Comedian in Shorty Awards. Currently, Sanders enjoys over 3.54 million subscribers on his YouTube channel and over 3.4 million followers on Instagram.

Thomas Sanders was born on 24 April 1989, in Gainesville, Florida. He has three brothers, namely Patrick, Shea, and Christian. His first social media name Foster_Dawg is actually based on the name of his first dog. Sanders loves watching anime, such as Naruto and Dragonball Z. He identifies himself as a homosexual. 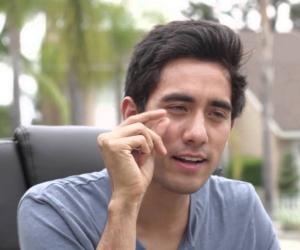