Devin Hayes is a 17 year old Instagram/Vine/YouTube star who rose to fame when he started posting videos on Vine. He attracted public’s attention when he first posted a comic skit video on his Vine account in 2013. He started filming comic videos only when he was in the fourth grade; giving signs of his inclination towards becoming a popular internet personality in the coming future. He created his own YouTube channel in March 2011. After posting a video on his channel in April 2011, he wasn’t quite active on YouTube until February of the year 2013 when he began posting videos of different genres. Being a teenager himself, his fan following includes a lot of teens and youth, which is probably because they can relate to his videos so well. While he posts videos about basic life hacks, he also posts covers of popular songs on his Instagram, YouTube and Vine accounts. He is also very well-known for his videos on YouNow, an international live broadcasting platform on internet. He has also collaborated with artists like, Jack Johnson, Jack Gilinsky, Nash Grier and Trevor Moran. Hayes Grier
10th June In History
DID WE MISS SOMEONE?
CLICK HERE AND TELL US
WE'LL MAKE SURE
THEY'RE HERE A.S.A.P
Quick Facts

American People
American Men
Illinois YouTubers
Illinois Instagram Stars
Male Viners
The Meteoric Rise To Stardom
Devin has always had an inclination towards music. He was quite active in his school musicals as a young boy, which is also when he began to think of becoming a social media sensation. At the same time he also wanted to make videos that are about something that most people can relate to. At the age of 9, he already knew what he wanted to pursue in his future and made his first video. He is very popular for his amazing voice and for posting covers of songs on his Instagram, YouTube and Vine accounts. He gradually began to gain a fan base and now has over 56,000 subscribers on his YouTube channel, over 140,000 followers on Instagram and more than 90,000 followers on Vine. They follow him and keep up with every new video that he posts. He is also very active on his YouNow account, a live broadcasting platform on internet that has played a major role in his rise to stardom.
Recommended Lists:

Continue Reading Below
What Makes Devin Hayes So Special
What makes Hayes special is his unique style of videos and covers of songs with his distinctive voice. Not only is he super talented and creative but he is also connected to his fans on a very personal level. What makes him different from a lot of other social media prodigies is that he is always in search of creating something new and innovative. But his talent is not the only thing that makes him special. His charm and that handsome face also attracts a lot of fan following. His fresh and young personality is what makes people like him. He has piercings and a modern sense of style that keeps him in vogue.
Recommended Lists:

American YouTubers
Male Instagram Stars
Male Social Media Stars
American Instagram Stars
Beyond Fame
Besides having a huge fan following at such a young age, he doesn’t let the fame get to his head. He is said to be a very down-to-earth and friendly person. Like any young teenager he likes spending time with his friends. He has a penchant for photogenic girls and also girls who like to cuddle. He is a regular teenager who likes spending time with his family and friends.
Recommended Lists:

American Social Media Stars
Gemini Men
Behind The Curtains
He has a wonderful family who has always been kind and supported him in pursuing his aspirations. He likes spending time with his family and friends. He has an elder sister, Morgan Hayes, who also collaborated with him in one of his videos back in 2013. He has a girlfriend, Hannah Marie Tharp, who has also been featured in his videos on Instagram, YouTube and Vine. His family and friends are his best critics and his biggest support system. This is what has helped him taste sweet success at such a young age. 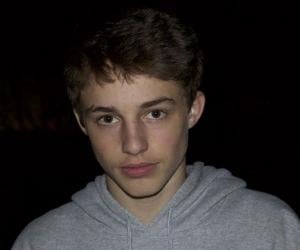