Grayson Dolan is a young heartthrob, who along with his twin Ethan, is quite famous for his videos worldwide. Witnessing their rising popularity, Brian Robbins (the founder of ‘AwesomenessTV’, a YouTube multi-channel network) signed the twins’ channel in September 2015. They received many opportunities to interact with other digital celebrities. Since their beginning, the twins have accumulated more than 6.4 million Vine subscribers that are totally crazy about their videos. Grayson is followed by more than 1.8 million followers on Twitter. To attract more followers, the duo launched their new stickers in a Twitter ad campaign. They’ve also participated in 4OU world tour. The year 2016 was a milestone in their professional history. The duo won People’s Choice YouTuber Award and Choice Web Star at Teen Choice Awards this year. Today, they have more than 5.6 million followers across other accounts on various social networks. Recently, an unknown source leaked a juicy piece of gossip regarding the twins. There are rumors that the twins are all set to pursue their career in acting. They’ll be working with Mackenzie Foy (Bella and Edward’s cute little daughter in Twilight) in a new upcoming TV series. 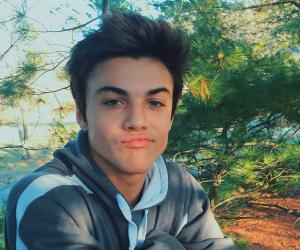 American People
American Men
New Jersey YouTubers
Male Viners
Male Youtubers
The Meteoric Rise to Stardom
Not many people know that the twins never planned to start a career online. It was their elder sister Cameron who introduced them to Vine.
Recommended Lists:

American Viners
American Vloggers
American YouTubers
Sagittarius Youtubers
Grayson created his first channel on Vine by the name ‘Formidable Force’, where he publishes hilarious family videos with his brother Ethan. His first video on Vine was about a kid stealing mayonnaise.
Recommended Lists:

Male Social Media Stars
American Social Media Stars
Sagittarius Men
Today, he owns multiple channels on Vine, where he uploads videos along with his siblings. He has a huge fan-following, all thanks to Vine. This is really impressive since he launched the channel on 25 May, 2013. As his popularity grew, he collaborated with fellow Viners like Amanda Cerny, Jack Paul and Jack Dail. Many popular stars like Kian Lawley, Cameron Dallas, Chloe Colaluca, Jake Paul and Meredith Mickelson have made guest appearances in some of their videos.

GET YOUR TICKETS TO COME SEE US ON TOUR ON 4OU.com (Link in bio!) In order to get the VIP meet and greet tickets, you have to get the general admission tickets first and then upgrade to VIP in a week! ALSO, the first 12 dates have been released!!!! SO EXCITED TO SEE YOU GUYS!!!!

Both Ethan and Grayson exploded onto the scene with their YouTube channel titled ‘Dolan Twins’. Their channel has more than 2.4 million followers on YouTube. They upload funny videos based on humor, family, entertainment, fanfiction etc. with hash tag #DolanTwinsTuesday or #DolanTwinsNewVideo, every Tuesday.

Who Is The Most Popular BTS Member?
Continue Reading Below
What Makes Grayson So Special
The duo has managed to successfully popularize themselves not only on Vine but on other platforms as well. Not only are Grayson’s videos widely popular among millions of viewers, but he himself is a total eye candy for ladies out there. What makes the twins more special is the zeal with which they involve their viewers in their personal life. Grayson asked his Twitter fans to share ideas for his journal through an image shared on Instagram.
The boys film pretty much everything in their life; whether it is Grayson’s trip to a local dentist for getting his wisdom tooth removed or Ethan’s reaction to challenges put by him, they get the crowd rolling with laughter every time.
Some of their amazingly funny videos on YouTube include ‘Hot Tub Confessions’, ‘Yoga Challenge’ and the ‘Reading Dirty Fanfinction challenge.’ The videos wherein Grayson got his wisdom tooth pulled out, and another one where he stuck Ethan to a wall using duct tape, earned more than 2 million views within a month. That sums up their magic pretty much.

Beyond Fame
Childhood days were a bit hard for the duo as they were bullied by other kids at school. The kids were jealous of the twins’ incredible talent in wrestling, football and other sports. Nevertheless, they kept up the ‘bro spirit’ and stood up for each other through thick and thin.
In 2015 the twins left their family behind in their hometown and relocated to the West Coast, in search for better opportunities. They live in a two-bedroom apartment with balcony (facing the pool). The teenage brothers are excited about their new life there, but Grayson missed his grandma, who has recently perfected her texting skills.
In the new city, they’re looking forward to a tour together. The dates are not confirmed yet.
Behind The Curtains
Other than maintaining an active social life online, Grayson is quite energetic in his real life. Having an athletic built, Grayson actively participates in wrestling and skateboarding with his brother. Probably that’s why they look so hunky and fit! Grayson is also known for his string of relationships with females. He is rumored to have dated Chloe Alison, a random girl named Hailey and he is currently dating Sofia Olivera, a fellow Viner.
He shares a strong bond with his siblings, which is quite evident from their videos. We just hope they continue to entertain us for a long time.
Trivia
Grayson is younger to his twin brother Ethan by 20 minutes. But of course it doesn’t bring any added advantages to Ethan, except for his ‘I’m the eldest so I get to brag’ rights.
Grayson is a sports enthusiast; he once won a local wrestling tournament held at Madison Square Garden.
A mole present on his chin is the most distinguishing feature of his body. He has one of his ears pierced which is forever occupied by a dangling earring.
His siblings are equally active online. Ethan works alongside Grayson at Vine and YouTube. Their sister Cameron has her own Vine channel with around 150,000 followers.