The Undertaker is an American professional wrestler. He is a four-time ‘WWF/E Champion’ and a three-time ‘World Heavyweight Champion.’ Considered to be one of the most popular wrestlers in the world, he began his wrestling career with ‘World Class Championship Wrestling’ (WCCW) in 1984. He became associated with ‘WWF’ (WWE from 2002) in 1990 and has worked for the promotion since then, becoming WWE's longest-tenured performer. Born as Mark William Calaway in Texas, he took a special interest in sports. He played basketball for his high school team and then played college basketball while studying at the ‘Texas Wesleyan University.’ He ventured into wrestling in 1984, and over the next few years adopted a variety of gimmicks and ring names in order to create a successful image for himself. He assumed the ring name ‘The Master of Pain’ in 1989 and eventually started calling himself ‘The Punisher.’ While working with the ‘World Championship Wrestling’ (WCW), he adopted the ring name ‘Mean Mark Callous,’ a name devised for him by Terry Funk. However, it was only after joining the ‘WWF’ that he finally assumed the identity ‘The Undertaker’—the name that catapulted him to international fame, making him one of the most popular wrestlers in the world. Roman Reigns
24th March In History
DID WE MISS SOMEONE?
CLICK HERE AND TELL US
WE'LL MAKE SURE
THEY'RE HERE A.S.A.P
Quick Facts

Nick Name: The Master of Pain, The Punisher

Quotes By The Undertaker Wrestlers

American People
WWE Wrestlers
American Men
California State University, Long Beach
Tall Celebrities
Childhood & Early Life
The Undertaker was born Mark William Calaway on March 24, 1965, in Houston, Texas, U.S., to Frank Compton Calaway and Betty Catherine Truby. He is the youngest of five brothers in the family.
He went to ‘Waltrip High School’ from where he graduated in 1983. He was an athletic teenager and used to play basketball for his high school team. He then attended the ‘Texas Wesleyan University’ where he continued playing basketball. 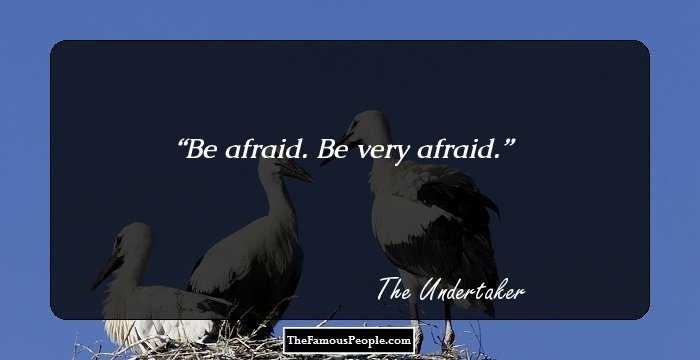 Continue Reading Below
Career
He made his wrestling debut in 1984 for ‘World Class Championship Wrestling’ (WCCW). He initially adopted the ring name ‘Texas Red,’ and thereafter adopted a series of ring names over the next few years.
He joined ‘World Championship Wrestling’ (WCW) in 1989 and was given the moniker ‘Mean Mark Callous.’ The ‘WCW’ did not renew his contract in 1990, and he joined the ‘World Wrestling Federation’ (WWF)—which became ‘World Wrestling Entertainment’ (WWE) in 2002—later that year.
After joining ‘WWF,’ he adopted the name ‘Kane the Undertaker.’ He made his official on-camera debut as a heel on November 22, 1990, at ‘Survivor Series’ where he appeared as the mystery partner of Ted DiBiase's ‘Million Dollar’ team.
He feuded with Randy Savage, the Ultimate Warrior, and Hulk Hogan in his first year in ‘WWF.’ At ‘Survivor Series’ in 1991, he defeated Hogan with the help of Ric Flair to win his first ‘WWF Championship,’ and thus became the youngest ‘WWF’ champion, a record which was eventually broken in 1993 by Yokozuna.
He wrestled frequently over the next couple of years, but a back injury forced him to stay away from the ring for several months. He returned to compete at the ‘Survivor Series’ in 1994, and defeated Yokozuna in a casket match.
In the 1998 ‘Fully Loaded’ event, the Undertaker and the reigning ‘WWF’ champion Stone Cold Steve Austin defeated Kane and Mankind to win the ‘WWF Tag Team Championship.’
During the late-1990s, he suffered from a groin injury and took some time off from wrestling in order to recuperate. He made his comeback in the early-2000s, donning a new look—he abandoned the mortician-themed attire of the past and took on a biker’s identity. At ‘Vengeance’ in 2001, the Undertaker defeated Van Dam to capture the ‘WWF Hardcore Championship.’
The year 2007 was a good one for the wrestler as he finally won his first ‘Royal Rumble’ match that year. He entered the ‘Rumble’ at No. 30 and won the title by eliminating Shawn Michaels, the 23rd entrant.
In 2012, the Undertaker appeared on the 1000th episode of ‘Raw’ to help Kane who was being challenged by Jinder Mahal, Curt Hawkins, Tyler Reks, Hunico, Camacho, and Drew McIntyre. The Undertaker and Kane ultimately overcame six other wrestlers in an exciting display of strength and stamina.
Continue Reading Below
After losing to Brock Lesnar at a ‘Hell in a Cell’ match in 2015, the ‘Wyatt Family’ captured the Undertaker and carried him away from the ring. Later that year in November, which marked the completion of 25 years of his career in ‘WWE,’ the Undertaker and Kane defeated the ‘Wyatt Family’ in a match in ‘Survivor Series.’
After sporadic appearances in the late-2010s, he took part in the ‘Raw 25 Years’ episode, challenging John Cena and defeating him in a three-minute squash match in January 2018.
He missed his first ‘WrestleMania’ match in 19 years at the ‘WrestleMania 35’ in April 2019, but returned to ‘Super ShowDown’ and defeated Goldberg. He then joined hands with Reigns and defeated Shane McMohan and Drew McIntyre in a match at ‘Extreme Rules.’
Along with his wrestling career, he has also appeared in some films, including the 1991 film ‘Suburban Commando’ and the 1999 film ‘Beyond the Mat.’ He appeared in the television show ‘Poltergeist: The Legacy’ as the ‘Soul Chaser Demon’ in 1999. 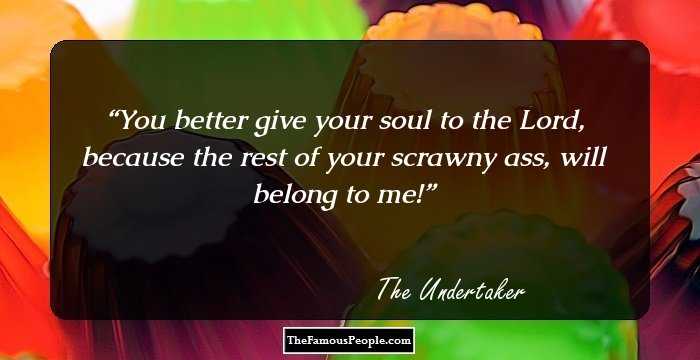 Quotes: Soul
Awards & Achievements
In 1989, he won the ‘USWA Unified World Heavyweight Championship’ as ‘Master of Pain.’
He won the ‘WWF/WWE Championship’ four times—1991, 1997, 1999, and 2002. He also won the ‘WWF Hardcore Championship’ in 2001.
Personal Life & Legacy
The Undertaker has been married thrice. He married Jodi Lynn in 1989 and had a son in 1993. The couple divorced in 1999.
His second marriage happened a year later in 2000, when he tied the knot with Sara. As a wedding gift to Sara, he had her name tattooed on his throat. The couple had two daughters before going their separate ways and eventually settling for a divorce in 2007.
In 2010, he married former wrestler Michelle McCool and the couple had their first child in 2012. 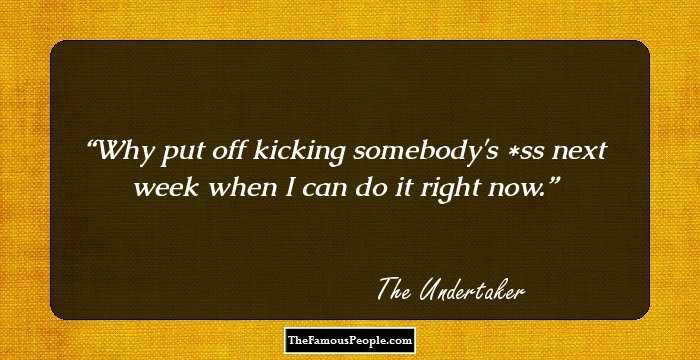 Trivia
The Undertaker’s performance in the ‘Royal Rumble’ match in 2007 is considered to be one of his most exciting ones. Five professional wrestling matches were featured on the event's supercard, and he won the title by eliminating one of the most popular wrestlers, Shawn Michaels.

Quotes By The Undertaker | Quote Of The Day | Top 100 Quotes

See the events in life of The Undertaker in Chronological Order