Born as Terence Alan Patrick Sean Milligan but popularly known as Spike Milligan, Spike was a comedian, actor, poet and writer all rolled into one. He was a multi-faceted personality who created several comedy shows for radio and television, authored many books, and also acted in various films. In spite of having many great works to his credit, his ticket to immortality was the radio comedy program, ‘The Goon Show’ for which he is remembered even today. The show was a British program broadcast by BBC, and had listeners in several countries across the world: India, Australia, Canada and New Zealand. The show was a tremendous success that catapulted Milligan to international fame. The popularity of the show prompted him to create many other comedy shows for radio and television like ‘The Idiot Weekly’ and ‘A Show Called Fred’. His celebrity status as a radio star led to film offers and he made quite a few movie appearances in comic roles. He was also a prolific poet and writer; he specialized in writing silly poems for children. He wrote a series of pastiche novels—funny rewritings of original works—on topics ranging from the Bible to Robin Hood. Though most of his works were related to comedy and humour, he also wrote about serious issues in his war memoirs. Irish Celebrities
Irish Men
Aries Actors
Irish Actors
Male Comedians
Childhood & Early Life
Milligan was born in British India to an Irish father and English mother. His father Leo Alphonso Milligan served in the British Indian Army.
He attended the Convent of Jesus and Mary, Poona, and later went to St. Paul’s Christian Brothers, Rangoon.
Later on he shifted to the U.K. where he spent the most of his life. 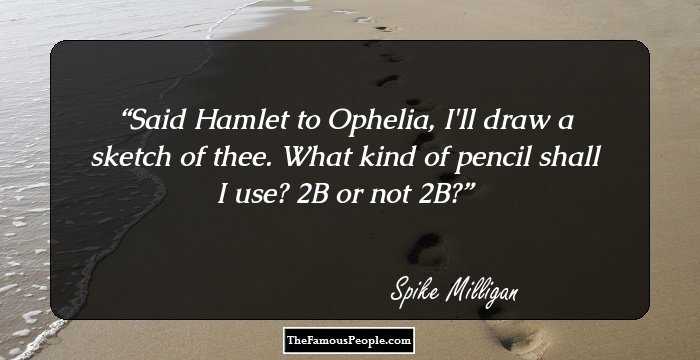 The Hottest Male Celebrities With The Best Abs
Career
He had an inherent interest in music and comedy, and performed as a musician during the late 1930s and early 1940s. He had to enlist in the army to fight in the war with Nazi Germany, which soon took the form of World War II.
Even while serving in the military, he continued performing comedy sketches to entertain the soldiers, and played guitar for a comedy group called The Bill Hall Trio.
While serving as a Gunner during the war in North Africa, he met Harry Secombe with whom he would collaborate later on for his shows.
He was badly wounded in the Battle of Monte Cassino and was hospitalized for a long period. After being demobilized from the army, he became a fulltime entertainer.
He returned to England and tried to make a living performing musical comedy acts. He also attempted to get into the world of radio. He got his first break when he was appointed as a writer on comedian Derek Roy’s show.
In 1951, he joined hands with Harry Secombe and Peter Sellers to create a comedy radio program, ‘The Goon Show’. The show was broadcast on BBC and was initially called ‘Crazy People’.
Milligan was the chief writer of most of the scripts. The show was characterized by funny plots, marked by elements of surreal humour and bizarre sound effects.
The show was aired internationally and was heard in several countries like India, Canada, Australia and New Zealand. The show ran successfully till 1960.
Milligan and Peter Sellers, along with others made a television comedy show based on ‘The Goon Show’. This show was called ‘The Idiot Weekly, Price 2d’ and debuted in 1956. It was followed by ‘A Show Called Fred’ and ‘Son of Fred’ later the same year.
Continue Reading Below
He wrote a novel ‘Puckoon’, published in 1963. It was a work of comedy and his only major fictional work. The book was later adapted into a play and made into a movie.
He starred in a television sketch comedy series ‘The World of Beachcomber’ in 1968. The show consisted of unrelated pieces of humour linked together by performances by Milligan dressed in a smoking jacket and cap.
He wrote and starred in the ‘Q’ television series, a comedy show which ran from 1969 to 1982. There were six series in all, each consisting of six or seven episodes, 30 minutes long.
Although known basically for his comic work, he also wrote serious literature. He published seven volumes of war memoirs over a period of 21 years (1971-1992), describing his war time experiences from 1939 to 1950.
From 1993 to 2000, he authored a series of parody novels based on popular original works by famous authors. The series was titled ‘According to Spike Milligan’ and the first book was a pastiche of The Bible.
He lent his voice to ‘Wolves Witches and Giants’, a children’s cartoon television series featuring parodies of classic fairy tales that ran from 1995 to 1998. The show was broadcast in over 100 territories and was a huge success. 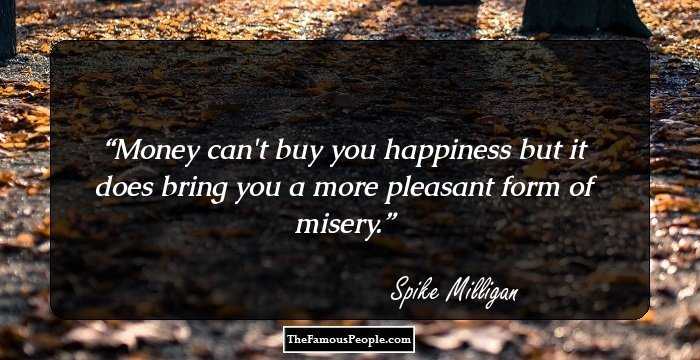 Quotes: You, Money, Happiness
Major Works
The iconic radio program ‘The Goon Show’ which made him an international comedian was his biggest career achievement. The show was so tremendously popular that many television shows, plays, and films were based on it.
He narrated the children’s animated television series, ‘Wolves Witches and Giants’ which consisted of comic adaptations of classic fairy tales featuring villains like wolves, witches and giants. The show debuted in 1995 and was highly successful.
Continue Reading Below
Awards & Achievements
He won the British Comedy award for Lifetime Achievement in 1994. The award is presented to honour notable comedians and entertainers. 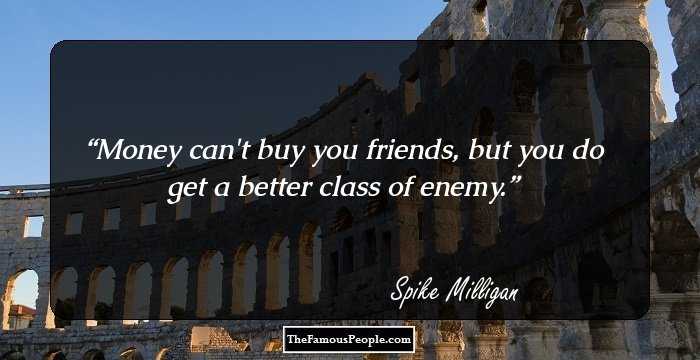 Quotes: You, Money, Friends
Personal Life & Legacy
He married June Marlow in 1952 and divorced her in 1960. They had three children.
He married again in 1962. His second wife Patricia died from cancer in 1978. Their daughter Jane Milligan is an actress.
In spite of being married, he had liaisons with other women which resulted in the birth of two children out of wedlock.
He married for the third time in 1983. His marriage to his last wife Shelagh Sinclair lasted till his death.
He was an outspoken advocate on environmental issues and animal rights, and actively participated in conservation campaigns.
He died from kidney failure in 2002 at the age of 83.
Trivia
He wrote his own obituary 11 years before he actually died.
He once called the Prince of Wales a "little groveling bastard".
His nonsense verse "On the Ning Nang Nong" was voted U.K.’s favourite comic poem in 1998.

See the events in life of Spike Milligan in Chronological Order