Tecumseh was a famous Native American chief of the Shawnee, who opposed the white settlement in the United States. During his lifetime, he attempted to organize a union of tribes to fight early white settlement. Towards the end of his life, Tecumseh worked with the British in ‘The Canadas’ to oppose the rapid growth of the white settlement in the West. That dream was cut short when U.S. troops crushed the warriors led by Tecumseh’s brother, Tenskwatawa during the Battle of Tippecanoe. Despite his noble efforts to protect his tribes and their rights on Native American soil, he and his men were defeated by the white settlers and the great chieftain was eventually killed at the Battle of the Thames. Today, Tecumseh’s name is synonymous with courage, bravery and perseverance. His name has gone down in the annals of history, as the leader who advocated peace for his people by means of wanting to drive out the white settlers from claiming what he believed was rightfully their own. There are countless institutes, books, towns, documentaries and movies that are based on Tecumseh and his life today. American People
American Men
Male Leaders
Pisces Leaders
American Leaders
Childhood & Early Life
Tecumseh was born in a Shawnee Indian village in March 1768 in Ohio. As he grew up during the American Revolutionary War and the Northwest Indian War, he was exposed to war from a very young age.
In 1774, his father, Pukeshinwah, was killed in Lord Dunmore’s War and many villages were ransacked and pillaged during this war. At the age of 15, after the American Revolutionary War, he joined a posse of Shawnee peoples, who were determined to stop the white invasion.
After the battle, his family moved to the parish of Chillicothe, which was destroyed in 1779 by Kentucky militia. The family moved a second time, but that too was destroyed by the white settlers.
The third time, the family moved to the village of Standing Stone, which was attacked in 1782. Following this attack, they finally moved to a new Shawnee settlement near Bellefontaine, Ohio. 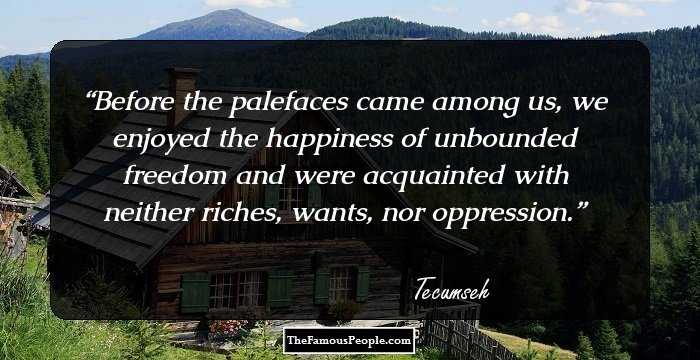 The Most Popular US Veterans
Later Life
He accompanied his brother, Cheeseekau, a Shawnee warrior, on many wars to fight the white settlers. During a raid, Cheeseekau was slain and Tecumseh was made the leader of a small Shawnee group, eventually becoming the leader of other pillaging parties.
He returned to Ohio in 1790 and after that, he took part in several battles including the Fallen Timbers battle that took place four years later. The Indians were beaten by the Americans, which concluded the Northwestern Indian Wars working to the advantage of the Americans.
He settled in Ohio with his brother, Tenskwatawa, who later became a religious leader. In 1808, along with his brother and followers, he left the area and they moved northwest, founding the village of Prophetstown. Here, Tecumseh hoped to recruit a confederacy involving other Indian tribes to fight off the white expansion.
In 1809, William Henry Harrison proposed the Treaty of Fort Wayne, offering large bribes to Native Americans to retreat from their lands, taking three million acres of their lands in return. Tecumseh’s open hostility to the treaty marked his advent as a powerful spearhead.
In 1810, he led four hundred equipped warriors from Prophetstown to provoke Indiana governor, Harrison. He began rabble-rousing the warriors to kill Harrison, who in order to defend himself, pulled his sword.
Harrison’s small but quick garrison surrounded him to support him, to which Tecumseh stated that unless Harrison annulled the treaty, he would seek an agreement with the British to fight them.
In 1811, the U.S. launched a defensive strike on the growing Tecumseh confederacy. On the confluence of the Tippecanoe and Wabash rivers, Tecumseh’s brother, Tenskwatawa, led about 500 Native men against the U.S. invaders.
Harrison directed his forces and the U.S. gained strategic advantage in the Battle of Tippecanoe and Tenskwatawa’s troops, though outstripped, were more skilled at battle.
Tecumseh and his followers allied with the British as the War of 1812 commenced. This lasted for three years. During this war, Tecumseh discussed with Britain to get them to help him retrieve parts of Ohio, Michigan, Indiana, Illinois and Wisconsin, which were forcefully taken by the U.S.
Continue Reading Below
In 1813, the Battle of the Thames began, which was a combined British and Native American effort against the U.S. forces. The British troops fled during the course of the battle, leaving Tecumseh’s troops to fight alone. This was the last of the battles fought by the courageous leader. 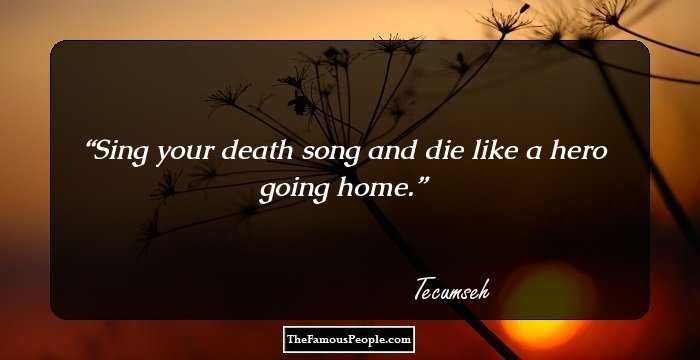 Quotes: Death, Like, Home
Major Battles
The Battle of the Thames, which took place in 1812, was a war between the United States and Great Britain, who were allies of the Native American confederacy, particularly the Shawnee chief, Tecumseh. Although the Americans won the battle, this is regarded as one of the greatest battles that Tecumseh and his 500 native warriors fought even though the British retreated in the middle of the war. Tecumseh and his men continued to fight, displaying extreme valor and bravery. It is believed that the Native American chief was killed in this battle.
Personal Life & Legacy
There are not many historical sources that talk about Tecumseh’s wives or how many children he had. However, it is speculated that he married a Native American woman, with whom he had a son, Mahyawwekawpaese.
It is believed that he divorced his first wife and married another Native American woman called Mamate and that they had a son together called, Naythawaynah. It has often been mentioned in texts that Mamate died in childbirth, while other sources indicate that she went on to become the mother of many more children.
He was killed during the Battle of the Thames on October 5 1813.
The Ontario Heritage Foundation and Kent Military Reenactment Society instituted a panel in Tecumseh Park, Ontario in his honor. There are also a number of memorials in his honor including the Tecumseh building in Springfield Ohio.
Four ships in the United States Navy have been named after him including, the ‘USS Tecumseh’, the ‘USS Tecumseh (YT-24)’, the ‘USS Tecumseh (YT-273)’ and the ‘USS Tecumseh (SSBN-628).
A massive photograph of the Native American leader now hangs in the Royal Canadian Military Institute.
There are several schools that are named in his honor including the Tecumseh Junior-Senior High, Lafayette Tecumseh Junior High and Tecumseh High, in Tecumseh, Michigan.
This Native American leader has also been honored by being mentioned in popular culture like comic books, films, literature and television. These include the film ‘Tecumseh’, the 1997 novel, ‘The Second Bend in the River’ and a statue of Tecumseh in the television series, ‘Cheers’. 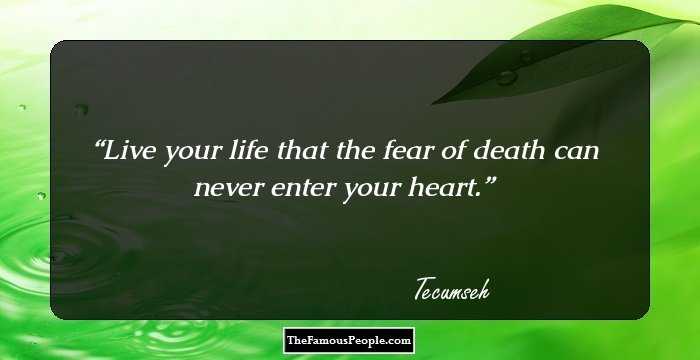 Quotes: Life, Death, Never, Heart, Fear
Trivia
This famous Native American chieftain’s name means ‘A Panther Crouching for his Prey’ in English.
You May Like

Quotes By Tecumseh | Quote Of The Day | Top 100 Quotes

See the events in life of Tecumseh in Chronological Order