Suicide Christ is an American punk rapper and half of the rap duo '$uicideboy$.' He performs along with his cousin, Ruby Da Cherry. The duo has released several music projects through 'G59 Records.' Their compositions mainly express their struggle with drugs, self-destruction, anxiety, and depression. Suicide Christ has gained immense popularity with his impressive body of work. His compositions are aggressive, but each of them carries a message. His aggressive lyrics and his devilish appearance have earned him a lot of notoriety, too. With over 30 releases, including EPs and singles, Suicide Christ has contributed a lot in transforming '$uicideboy$' from a garage band to a professional punk-rap band. Cardi B
Rappers #880
Singers #8948
Continue Reading Below
11th April In History
DID WE MISS SOMEONE?
CLICK HERE AND TELL US
WE'LL MAKE SURE
THEY'RE HERE A.S.A.P
Quick Facts

American People
Male Rappers
Aries Singers
Male Singers
Aries Rappers
Career
Suicide Christ grew with an inclination toward rap. At the age of 8, he listened to popular rap compositions such as 'U.N.L.V.’s 'Drag Em 'N the River' and 'Three 6 Mafia’s 'Slob on My Knob' for the first time, while riding with his uncle. Suicide Christ became obsessed with the compositions. A few years later, he was completely immersed in rap. Rappers such as Gucci Mane, Lil Wayne, and Shawty Redd became his idols. Suicide Christ’s deep interest in rap and punk was also because of his mostly “black” friend circle.
Suicide Christ later gravitated toward DJ-ing and songwriting. He started DJ-ing at the age of 14. His parents had gifted him a turntable set, and that made him start practicing. With time, he started to perform at various clubs. By 19, Suicide Christ was obsessed with lyricist, rapper, and record producer T-Pain. This was when he was introduced to ‘Auto-Tune.’
A few months later, Suicide Christ began creating his own compositions. He was also involved in drug dealing, to pay his bills. He also worked as a furniture salesman for three years. However, he was fired for his tattoos and unapproachable appearance.
The turning point in Suicide Christ’s life came when Ruby asked him to work on creating their own band. The two cousins joined to form the band '$uicideboy$.' With Ruby, Suicide Christ has composed several raps that are popular for their aggressive lyrics. The lyrics of the band chronicled Suicide Christ’s struggle with drug addiction, depression, and self-destruction. Soon, he adopted the pseudonym "Suicide Christ," inspired by the name of the band. In addition, he has other stage names such as "$crim," "$lick $loth," "Yung $carecrow," "Anthony Mars," “Budd Dwyer," “Yung Heath Ledger," and " Pontious Pilate."
In November 2013, Suicide Christ began publishing his compositions on the internet. '$uicideboy$' owns an account on 'SoundCloud,' where the duo released its first song, '$moke a $ack.' The track 'Paris' garnered millions of listeners on 'SoundCloud.' After the duo signed a contract with 'G59 Records,' they released a 21-part series, 'Kill Your$elf.' In 2015, the duo released several EPs such as 'Black $uicide (with Black Smurf),' 'Grey Sheep,' 'G.R.E.Y.G.O.D.S.,' and 'My Liver Will Handle What My Heart Can't.'
By 2016, '$uicideboy$' was the next big name in the rap arena. They began performing live and performed at many international shows, too. By mid-2016, the duo released its 29th EP, 'Radical $uicide.' This five-track EP was placed at number 17 on the 'Billboard Rap' charts. In 2017, they released the EP 'Kill Your$elf, Pt. 11: The Kingdom Come Saga,' a revised version of the ‘Kill Your$elf’ series. They released 21 volumes of the series. The same year, the duo attended the 'Global Epidemic Tour.' Suicide Christ announced the discontinuation of his 'Twitter' account in 2017.
In 2018, Suicide Christ released the single 'FUCKALLOFYOU2K18’ with Ruby. The track 'You’re Now Tuning in to 66.6 FM with DJ Rapture (The Hottest Hour of the Evening),' premiered on 'XXL’ and hit a million plays within a week of release. Their last three projects, 'Eternal Grey,' 'Radical $uicide,' and 'Grey Sheep 2,' earned over a million plays on 'SoundCloud.'
'G59 Records' owns a 'YouTube' channel that primarily contains compositions by '$uicideboy$.'
You May Like

American Rappers
American Singers
Aries Men
Continue Reading Below
Family Life
Suicide Christ was born on April 11, 1989. His real name is Scott Arceneaux. His mother’s name is Toni Arceneaux. His and Ruby’s mothers are sisters. Together they grew up in New Orleans, Louisiana.
Suicide Christ was introduced to drugs after the demise of his grandfather His grandfather’s death was an emotional shock for him. To cope with the death, his friends offered Suicide Christ ‘Vicodin,’ and that was the beginning of his addiction. He was soon addicted to pills, heroin, and marijuana. When Ruby came to know about this, he emotionally blackmailed his cousin to help him get rid of his addiction. Ruby told Suicide Christ that he would be compelled to discontinue '$uicideboy$' if he did not stop taking drugs. This worked, and Suicide Christ eventually gave up drugs. However, he still smokes marijuana at times.
While in school, Suicide Christ played ball in the shortstop position. He was even approached by the 'Pittsburgh Pirates' and the 'Florida Marlins.'
Suicide Christ’s devilish punk look includes piercings on his nostrils and ears, dreadlocks, tattoos on his face, and metallic teeth. He also sports a pendant on his neck, which has the letters “FTP” embossed, representing the phrase “F..K The Population.” 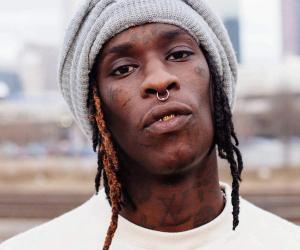