Stephen “Stevie” Ray Vaughan was an American musician, singer, lyricist and record producer, who is better known as the lead singer of the eighties rock band from Texas, ‘Double Trouble’. Although, he had a short-lived musical career of only seven years yet Vaughan became the master of blues rock during his time and earned many awards and recognition for it. He belonged to a middle class family and music was his only passion since childhood; it was also his only solace and salvage from his father’s abusive behavior. He started out in Austin by playing sporadic gigs with garage bands until he found his own band called ‘Double Trouble’. The band was first recognized by Mick Jagger and gained popularity when they signed a professional contract with the Epic records. The band had a good run for at least three years with three great albums like ‘Texas Flood’, ‘Soul to Soul’, etc. until Vaughan started getting seriously affected by his cocaine and alcohol addiction. But he conquered his weakness for the drugs and came out clean and successful with his album ‘In Step (1989)’, which also fetched the band their first Grammy award. A year after that Vaughan died an untimely death in a chopper crash. Taylor Swift
Guitarists #8
Drummers #24
Lyricists & Songwriters #135
DID WE MISS SOMEONE?
CLICK HERE AND TELL US
WE'LL MAKE SURE
THEY'RE HERE A.S.A.P
Quick Facts

American Celebrities
Drummers
Guitarists
Blues Musicians
Lyricists & Songwriters
Childhood & Early Life
Stevie Ray Vaughan was born on October 3, 1954 in Dallas, Texas, to Jimmie Lee Vaughan and Martha Jean Vaughan. His father was an asbestos worker and mother worked as a secretary.
Vaughan was interested in playing instruments since a very young age; he used to play drums, saxophone and guitar. He had a rough childhood as his father was an alcoholic and used to get violent after a few drinks. 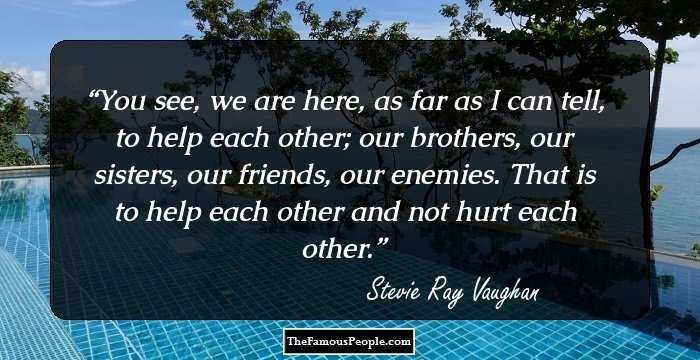 Quotes: You, Friends, I
Continue Reading Below
You May Like

Who Is The Greatest Female Warrior In History?
Career
Vaughan went through a hard time trying to maintain his academic performance at Southern Methodist University as he had no inclination towards studies and all his loyalties lied with music and playing with garage bands.
Soon he dropped out of college and moved to Austin. In order to make a living, he collected soda and beer bottles for money and stayed at friends’ houses. During this time he was able to get sporadic gigs in Austin.
In 1975, Vaughan collected a bunch of musicians and formed the band, ‘Triple Threat’, which was later changed to ‘Double Trouble’. He was the lead vocalist of the band and started getting quite a bit of popularity in Texas.
‘Double Trouble’ caught the attention of the famous Mick Jagger in 1982. They received an invitation to come and play at his party in New York. In the same year, they performed at the Montreux Blues and Jazz Festival in Switzerland.
In 1983, singer David Bowie’s gave them an opportunity to play on his album ‘Let’s Dance’. In the same year, they signed a contract with Epic and the producer, John Hammond, Sr. took over the management of their career.
In 1983, their first album ‘Texas Flood’ was released and it ranked at No. 38 on the big charts. Vaughan was voted as the Best New Talent and Best Electric Blues Guitarist by ‘Guitar Player Magazine’.
After some successful tours, ‘Double Trouble’ released their second album, ‘Couldn’t Stand the Weather’ in 1984. The album went gold and peaked at No. 31 on the rock musical charts all over America.
In 1985 ‘Soul to Soul’ was released and its singles—‘Change It’ and ‘Look at Little Sister’ were great hits on the Mainstream Rock Tracks chart. ‘Live Alive’ was released the next year—a recording of live concerts in Texas.
After a break of few years due to Vaughan’s substance abuse problem, the band released ‘In Step’ in 1989. The album peaked at No. 33 on the rock charts and earned them a Grammy for Best Contemporary Blues Recording.
Continue Reading Below
Vaughan collaborated with his brother Jimmie to record an album called ‘Family Style’ in 1990. The album consisted of ten songs—both the Vaughan brothers always wanted to do an album together and it was released after Vaughan’s death.
Major Works
Vaughan’s most important work of his short-lived musical career is the album that he released after recovering from his substance abuse problem—‘In Step’. The album consisted of songs written on his personal and spiritual evolution and earned him a Grammy.
Awards & Achievements
Vaughan earned two Grammys— one for Best Contemporary Blues Recording for ‘Step’ and the other for Best Contemporary Blues Album for ‘Family Style’, posthumously. He was inducted in the Blues Hall of Fame in 2000.
Personal Life & Legacy
Vaughan married Lenora “Lenny” Bailey in 1979, after meeting her for the first time at one of his Nightcrawlers’s performances at La Cucaracha, Austin. They both got divorced after Lenny squandered his money on drugs and other men.
In 1986, he met with Janna Lapidus in New Zealand and started seeing her immediately afterwards. When he was in London getting treated for his substance abuse problem, she visited him and he referred to her as his fiancé.
Vaughan developed an alcohol and cocaine problem in the late eighties and he started consuming as much as seven grams of cocaine every day. His stomach got scarred from mixing alcohol with cocaine and he almost died in Germany.
After that he decided to stay away from drugs and checked himself into Peachford Hospital, a rehab center, and began to lead a spiritual life. He stayed away from drugs for the rest of his life and lived soberly.
On August 27, 1990, Vaughan was travelling in a helicopter to Chicago with Eric Clapton’s entourage. Because of dense fog the chopper crashed into the mountains and everyone on board was killed. He was buried at Laurel Land Memorial Park, Dallas.
Trivia
He was the younger brother of musician and singer, Jimmie Vaughan.
He was influenced by blues musicians including Albert King, Freddie King, Otis Rush, and Muddy Waters, as well as rock guitarists such as Jimi Hendrix and Lonnie Mack.
Vaughan ranked at No. 7 on the Rolling Stone's list of "100 Greatest Guitarists" and at number 12 in the 2011’s list.