Steven Seagal is a renowned American actor and 7th-dan black belt in aikido. He started off as an aikido instructor in Japan. Success followed him all the way to Los Angeles, California, where he was offered a role in the film ‘Above the Law.’ He then went on to appear in a number of films, including ‘Under Siege,’ ‘On Deadly Ground,’ and ‘Under Siege 2: Dark Territory.’ Although he did not become an overnight sensation in Hollywood, he went on to make a mark as a talented martial artist-cum-actor whose skills were used in martial arts films. He then went on to appear in a number of low-budget direct-to-video films for a period of time and returned to big screen with the film ‘Machete.’ Apart from acting, he also worked as a reserve deputy sheriff. When he took a break from acting, he focused more on his business ventures, one of which is called ‘Seagal Enterprises.’ He is also known for appearing in his own reality TV series ‘Steven Seagal: Lawman.’ He is also an environmentalist, animal rights activist, and supporter of the Tibetan independence movement. Tom Cruise
10th April In History
DID WE MISS SOMEONE?
CLICK HERE AND TELL US
WE'LL MAKE SURE
THEY'RE HERE A.S.A.P
Quick Facts

American People
American Men
Michigan Actors
Tall Celebrities
Tall Male Celebrities
Childhood & Early Life
Steven Frederic Seagal was born on April 10, 1952, in Lansing, Michigan, USA, to Samuel Steven and Patricia. His mother was a medical technician and his father was a high school teacher. He is of Jewish-Russian origin from his father’s side and English, German, and Dutch ancestry from his mother’s side.
His family shifted to Fullerton where he studied at ‘Buena Park High School’ in Buena Park.
He landed a job as a dishwasher in a restaurant named ‘The Wagon Wheel.’ Since he was extremely swift on his feet, the cook, who was a Japanese Shotokan karate expert, observed him and decided to give him some training on the basics of karate.
He then went on to learn aikido under Harry Kiyoshi Ishisaka in 1964. During his late teens, he moved to Japan with his father, who was visiting the country for military reasons, and decided to stay in Japan permanently.
Soon, he earned a 7th dan degree and Shihan in aikido and became the first foreigner in Japan to operate an aikido dojo. 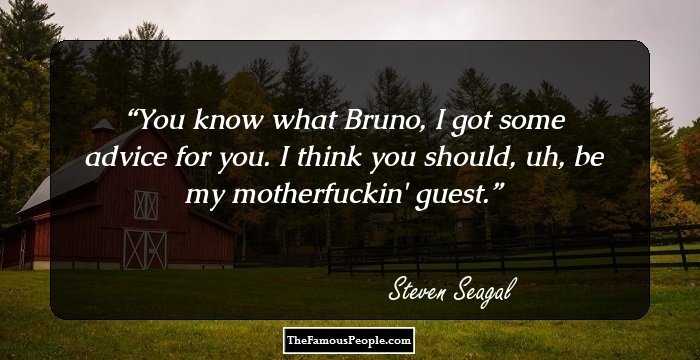 Quotes: You, Think, I
Continue Reading Below
Career
His first stint in Hollywood was when he worked as a martial arts coordinator for the film ‘The Challenge’ which released in 1982.
After becoming the head of ‘Tenshin Aikido’ in Osaka, he moved to the US in 1983, where he opened an aikido dojo in North Hollywood. The same year, he worked as a martial arts coordinator for the film ‘Never Say Never Again.’
In 1988, he was approached to write and coordinate the martial arts sequences for the film ‘Above the Law,’ directed by Andrew Davis. He was also cast in the film as ‘Nico Toscani.’ Two years later, he was seen in films, such as ‘Hard to Kill’ and ‘Marked for Death.’
His performance in films like ‘Out for Justice,’ ‘Hard to Kill,’ and ‘Marked for Death’ made him popular.
His popularity increased when he was cast to play ‘Casey Ryback’ in the 1992 blockbuster hit ‘Under Siege.’ Two years later, he appeared in a mediocre film titled ‘On Deadly Ground,’ which he directed.
In 1995, he starred in ‘Under Siege 2: Dark Territory,’ a sequel to ‘Under Siege.’ The film went on to become one of his most commercially successful films. The next year, he starred in ‘The Glimmer Man’ and ‘Executive Decision.’
He made a film titled ‘Fire Down Below’ in 1997, where he played the role of an EPA agent fighting moguls discarding toxic waste. The film did not do well at the box office and his contract with ‘Warner Bros.’ ended with the movie.
In 1998, he starred in a direct-to-video film titled ‘The Patriot’ which he also produced.
From 2001 to 2003, he was seen in movies like ‘Exit Wounds,’ ‘Ticker,’ ‘Half Past Dead,’ ‘The Foreigner,’ ‘Out for a Kill,’ and ‘Belly of the Beast.’
Continue Reading Below
Apart from being a martial artist and actor, he is also a keen guitarist. He released his debut album ‘Songs from the Crystal Cave’ in 2005. The same year, the film ‘Into the Sun’ featured a number of tracks from his album.
His second album ‘Mojo Priest’ released in April 2006. He spent the rest of the year touring the United States and Europe with his band to support the album.
Since he also worked as a Reserve Deputy Chief in the Jefferson Parish, he decided to capitalize on his law enforcement work and began shooting for his show ‘Steven Seagal: Lawman’ which premiered in 2009 and ran for a number of seasons. Apart from his show, he also appeared in ‘The Keeper’ and ‘Driven to Kill.
In 2010, he returned to mainstream Hollywood with the movie ‘Machete’ where he played the role of ‘Rogelio Torrez.’ The same year, he also starred in ‘Sheep Impact.’
From 2011 to 2014, he appeared in ‘Born to Raise Hell,’ ‘Maximum Conviction,’ ‘Gutshot Straight,’ and ‘Force of Execution.’
In the mid and late-2010s, Seagal was predominantly seen in action movies like ‘Absolution’ (2015), ‘End of a Gun’ (2016), ‘The Perfect Weapon’ (2016), ‘Cartels’ (2017) and ‘Attrition’ (2018).
In 2019, he was part of an ensemble cast for the movie ‘General Commander.’ The same year, he also played the lead role of ‘Augustino 'Finn' Adair’ in James Cullen Bressack's action film ‘Beyond the Law.’
Major Works
He starred in ‘Under Siege’ in 1992, which is considered one of his most commercially successful films till date. The movie went on to collect $156,563,139 at the box office and spawned a popular sequel titled ‘Under Siege 2: Dark Territory.’ In 2001, the movie was named in the list of ‘100 Years… 100 Thrills.’
Awards & Achievements
He was honored with a ‘PETA Humanitarian Award’ in 1999.
Continue Reading Below
Personal Life & Legacy
Seagal married Miyako Fujitani in 1974. He has two children from his marriage with Fujitani; their children went on to become extremely popular in their respective fields. Seagal left Fujitani in 1987.
While his divorce with Fujitani was still not finalized, he married Adrienne La Russa.
While he was married to La Russa, he fell in love with Kelly LeBrock and she became pregnant with his child. Subsequently, his marriage with La Russa was annulled and he married LeBrock in 1987. He has three children with LeBrock.
In 1991, he was accused of sexual harassment by employees of ‘Warner Brothers.’ Four years later, he was charged with employment discrimination and sexual harassment by Cheryl Shuman.
In 1996, he divorced LeBrock citing “irreconcilable differences.” During this time, he started a relationship with Arissa Wolf with whom he has a daughter named Savannah.
A lawsuit was filed against the actor in 2010 wherein he was accused of illegal trading of women for sex, sexual harassment, and retaliation.
He is currently married to Erdenetuya Batsukh with whom he has a son named Kunzang.
He is a godparent to Yabshi Pan Rinzinwangmo, the lone child of the 10th Panchen Lama of Tibet.
He is an active PETA activist and also supports the Tibetan independence movement.
Seagal is a Buddhist.
Trivia
This famous American actor and martial artist’s company manufactures an energy drink called ‘Lightning Bolt’ and an aftershave line called ‘Scent of Action.’

See the events in life of Steven Seagal in Chronological Order