Popularly known as the ‘Father of the Digital World’, Steve Jobs an American entrepreneur, investor, co-founder of Apple Inc. Not the one to be satisfied with a single achievement, he moved on to make history in the world of consumer electronics with his foray into the music and cellular industry. The founder of Apple Inc, Pixar Animation Studios and NeXT Inc, Jobs gave information technology its life and blood. A master of innovation, he was known for his perfectionist attitude and futuristic vision. He foresaw trend in the field of information technology and worked hard to embrace the same in his line of products. With about 346 US patents by his side, Steve Jobs created a revolution in his field with his novel ideas and unique concepts. During his years at the Apple, he administered the development of the iMac, iTunes, iPod, iPhone, and iPad. He was the mastermind behind the working of the company's Apple Retail Stores, iTunes Store and the App Store. Interestingly, with so much to fall back upon, it is quite amusing to know that this legendary innovator was not much educated, in fact a college dropout. Cause of Death: Respiratory Arrest

American Celebrities
Reed College
Pisces Entrepreneurs
American Entrepreneurs
Pisces Men
Childhood & Early Life
Born on February 24, 1955, Steve Paul Jobs was the adopted son of Paul Reinhold and Clara Jobs. His biological parents were Abdulfattah ‘John’ Jandali and Joanne Carole Schieble, who could not raise Steve, as their parents objected to their relationship.
Ever since a young age, Jobs was exposed to the world of mechanics. He would spent long hours with his father, dismantling and rebuilding electronic devices in the family garage. It was these experiences that gave the little boy tenacity and mechanical prowess
Academically, after passing his high school in 1972, he enrolled at the Reed College but dropped out of the same in a time frame of six months to pursue creative classes, including a course on calligraphy. 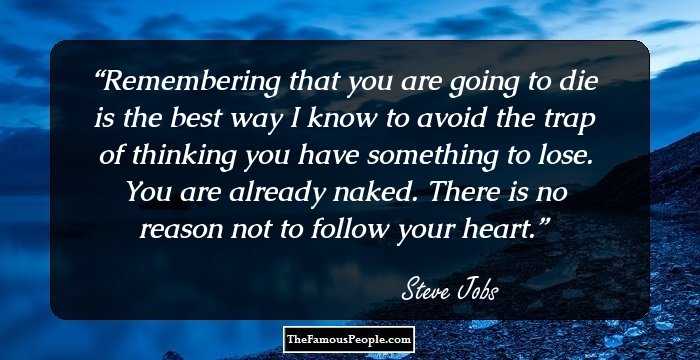 Quotes: You, Heart, I
Continue Reading Below
You May Like

The Most Popular US Veterans
Career
His first move professionally was that of a technician at Atari, Inc. in Los Gatos, California, in 1973.
In mid-1974, Jobs went to India to meet Neem Karoli Baba for spiritual enlightenment. Before he could meet Neem Karoli Baba, the Baba died and after a brief hiatus of about seven months, Jobs returned to Atari to create a circuit board for the arcade video game Breakout.
Along with Wozniak, he developed a circuit board eliminating about 50 chips from the machine thereby making the same compact. Next was the development of the digital ‘blue box’, which allowed free-long distance calls. It was the positive response of the blue box that instilled in him the need to make it big in electronics.
In 1976, along with Wozniak, he founded ‘Apple Computer Company’. Initially, the company mainly aimed at selling circuit boards. Same year, Wozniak invented the Apple I computer.
In 1985, difference of opinion between him and the company’s CEO John Sculley led to Jobs resigning from his own founded company. In the same year, he founded NeXT Inc. The company was famous for its technical strengths especially its object-oriented software development system.
In 1986, he bought the Graphics Group (later renamed Pixar) from Lucasfilm's computer graphics division. ‘Toy Story’ was the first animation film that was released after the acquirement.
Interestingly, in 1996, when Apple acquired NeXT Inc, he returned to his own co-founded company as a de facto chief in the company and was formally named interim chief executive.
Under his guidance, a number of projects were disbanded. He introduced a whole new range of products which steeply increased the sales of the company, making it one of the electronic giants in the world.
In 1998, Apple iMac was introduced to the world. It was the direct result of his return to Apple. iMac went through a changeover in look in the following year and the world was introduced the Graphite grey Apple iMac. Since then, there have been various variations that iMac has gone through.
Continue Reading Below
In 2000, he became the permanent CEO of Apple, adopting the title, iCEO. History was in the making as the company soon branched out bringing about improved digital appliances.
In 2001, the company sortied into the world of music with the introduction of iPod, iTunes digital music software and iTunes Store. The device was an instant hit and enhanced the sales and reputation of the company by leaps and bounds. The first generation of iPod gave way to revised consumer-friendly devices such as iPod classic, iPod Nano, iPod Touch and iPod shuffle.
In 2005, with Disney’s purchase of Pixar, he became the largest shareholder of Walt Disney Company with approximately 7% of the company’s stock. He served as one of the board members in the company.
In 2007, he forayed into cellular phone business with the launch of iPhone and rest as they say is history. With its multi touch display, own mobile browser, in-built iPod, the iPhone revolutionized the way the world looked towards a cellular device.
In the following years, he worked on the iPhone to come up with improvised versions. In 2008, iPhone 3G was released with three chief features: support for GPS, 3G data and tri-band UMTS/HSDPA; in 2009, iPhone 3GS was launched.
In 2010, he launched iPhone 4, which was a sleeker model than its successors and included enhanced features like five megapixel camera, secondary front facing camera with 4G capability.
In 2011, iPhone 4S was released which included Siri, a virtual assistant that is capable of voice recognition. In the same year, he resigned as the CEO of Apple but continued to serve as the chairman of the company’s board. 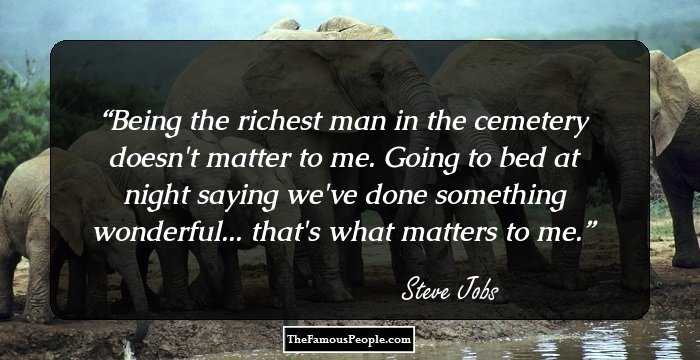 Quotes: Me
Major Works
He created a sensation in the world of cellular device with the launch of first generation iPhone. The first of its kind, the smartphone included multimedia capabilities and quad-band touchscreen. It was named the ‘Invention of the Year’ in 2007 by Times Magazine.
Continue Reading Below
Awards & Achievements
During his life, he received several awards including National Medal of Technology and Jefferson Award for Public Service.
He was inducted into California Hall of Fame in 2007. Same year, he was named the most powerful person in business by Fortune magazine.
In 2009, Fortune magazine named him as the CEO of the decade. Following year, he ranked at No 17 in Forbes list of The World's Most Powerful People.
In 2010, he was named person of the year by Financial Times. 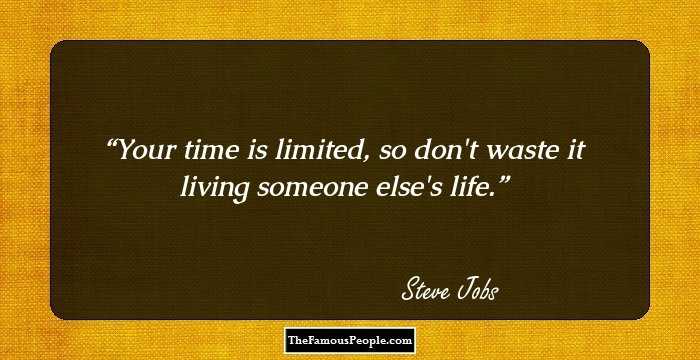 Quotes: Life, Time, Living
Family, Personal Life & Legacy
He was blessed with a daughter Lisa Brennan Jobs from his love partner Chrisann Brennan in 1978. Though he denied being the girl's father initially, he later acknowledged Lisa as his child.
He tied the knot with Laurene Powell on March 18, 1991. The couple was blessed with three children - a son, Reed, and two daughters, Erin and Eve.
In 2003, he was diagnosed with pancreatic cancer. He succumbed to the disease on October 5, 2011. A funeral was held two days later. He was buried in an unmarked grave at Alta Mesa Memorial Park, the only non-denominational cemetery in Palo Alto.
California Governor, Jerry Brown declared October 16 as ‘Steve Jobs Day’. A bronze statue of him was unveiled at the Graphisoft Company in Budapest in December 2011.
Continue Reading Below
Posthumously, he was awarded with Grammy Trustee Award and inducted as a Disney legend. He was even named as ‘greatest entrepreneur of our time’ by Forune magazine.
Top 10 Facts You Did Not Know About Steve Jobs
Steve Jobs asked William Hewlett, co-founder of Hewlett-Packard for some parts to complete a school project when he was 12. Impressed, Hewlett offered Jobs an internship at his company.
Jobs and his friend Steve Wozniak built and sold digital blue boxes for hacking telephone systems before they started Apple.
He admitted to have used LSD in his younger years and claimed that the drug made him think differently.
Jobs was a pescetarian which meant he ate fish but no other meat.
He named his company “Apple” because it came before Atari in the phone book—Atari was the name of the company Jobs worked for prior to creating Apple.
He was notorious for his lack of hygiene—it is said that he never bathed and walked around the office bare foot while working at Atari.
Steve Jobs always parked in the handicap parking zone.
He denied paternity of his first child who was born to a girlfriend, claiming he was sterile.
He acted as a mentor to Google founders Sergey Brin and Larry Page when the duo had newly started Google.
Steve Jobs' last words were "Oh wow. Oh wow. Oh wow".
You May Like

See the events in life of Steve Jobs in Chronological Order 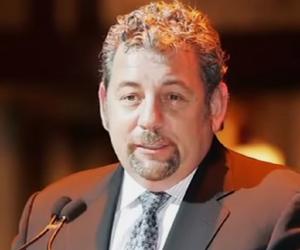