Stephen Sondheim was arguably one of the best ever composers in the field of musical theatre and certainly the best of his generation. Young Stephen battled domestic instability and a tough relationship with his mother to emerge as a child prodigy, as he started learning piano at the age of seven and wrote his first musical when he was fifteen. His neighbour in Pennsylvania, Oscar Hammerstein II, was responsible for fostering in him an interest of writing for musicals and also taught him a lot on this subject. Soon after his graduation, Stephen Sondheim started auditioning his songs, but struggled to get anything substantial for a few years. He faced frustration as two of his Broadway musicals were cancelled, but eventually announced his arrival with ‘West Side Story’. Over next four decades, Stephen Sondheim staked his claim to being one of the very best by delivering numerous brilliant performances, both with his music and lyrics. He also forged extremely productive partnerships with Harold Prince, John Weidman and James Lapine. He wasn’t afraid to try the unconventional and his concept comedies achieved a lot of success. Stephen Sondheim left a rich legacy and his staggering body of work will continue to mesmerize audiences worldwide. Rick Rubin
Composers #21
Musicians #105
22nd March In History
DID WE MISS SOMEONE?
CLICK HERE AND TELL US
WE'LL MAKE SURE
THEY'RE HERE A.S.A.P
Quick Facts

Stephen Sondheim was born on 22 March 1990, to Etta Janet and Herbert Sondheim, in New York City. His father was a dress manufacturer and his mother a fashion designer. Sondheim studied at ‘Fieldston School’ and later joined the ‘New York Military Academy’. He started learning piano from a very young age.

When he was ten years old, his parents divorced and he moved to rural Pennsylvania with his mother. The famous songwriter Oscar Hammerstein II was one of his neighbours and under his tutelage, Sondheim learned a lot about musical theatre.

He studied in George School in Pennsylvania, where he also wrote his first musical, ‘By George!’ which became extremely popular in the school. He graduated in 1946.

He enrolled at ‘Williams College’ in 1946 and during these years, wrote four musicals under Hammerstein’s guidance. After his graduation, he won the ‘Hutchinson Prize’ which enabled him to study composition for two years under renowned composer Milton Babbitt. 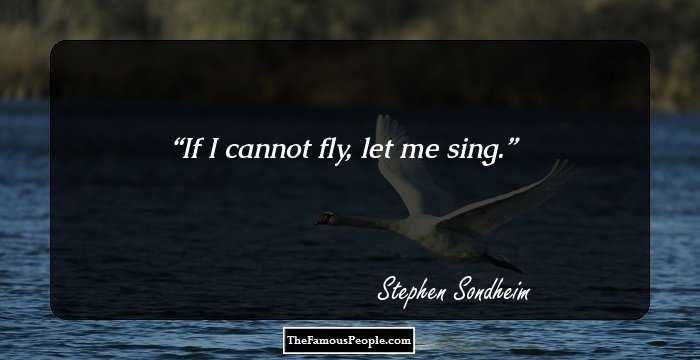 During the next few years, Stephen Sondheim kept auditioning. He wrote for the TV show ‘Toppers’ and got his first Broadway breakthrough, ‘Saturday Night’, for which he wrote the music and lyrics. But the project was abandoned due to the producer’s death.

In 1956, he wrote lyrics for the musical ‘West Side Story’ inspired from ‘Romeo and Juliet’ for which the famous composer Leonard Bernstein had composed the music. The musical opened on Broadway the next year and achieved great success. It ran for 732 performances.

Over the next few years, he continued to write music and lyrics for musicals, such as ‘Do I Hear a Waltz?’, a romance, ‘Follies’, a story of former showgirls, and ‘Evening Primrose’, based on a short story by John Collier. He also conducted the symphony orchestra ‘New York Philharmonic’ during this time.

From 1970 to 1981, Sondheim began a partnership with famous producer/director Harold Prince. Their first work together was the concept musical ‘Company’. Over the next decade, the pair collaborated on six musicals, all of which were directed by Prince. ‘A Little Night Music’, which narrates the romantic lives of three couples, is their most famous musical.

In 1976, he forged another association with librettist John Weidman and worked on three musicals with him. Their works include ‘Pacific Overtures’, regarding the westernization of Japan, ‘Assassins’, which features people who tried to assassinate US Presidents.

In 1984, after being impressed by the show ‘Twelve Dreams’, which he saw in 1981, Sondheim began another decade-long partnership with its director, ‘James Lapine’. Their collaborations include works like ‘Sunday in the Park with George’, ‘Into the Woods’, which featured characters from popular fairy tales and ‘Passion’, a dark story of unrequited love.

In 2003, after a nine-year hiatus, Sondheim returned to theatre with the musical ‘Bounce’ which chronicles the adventures of two brothers in the early 20th century. ‘Bounce’ did not attain much success. However, a revised version of the musical was released five years later that fared much better than the original.

In 2013, Sondheim collaborated with Wynton Marsalis for a special show titled ‘A Bed and a Chair: A New York Love Affair’. It consisted of more than twenty-four of Sondheim’s compositions, each of them modified a little by Marsalis.

In 2014, Stephen Sondheim wrote a new song, "She'll Be Back", for the film adaptation of Into the Woods, but the song was eventually cut from the film.

On September 15, 2021, Stephen Sondheim announced that he was working on a new musical called Square One in collaboration with David Ives. 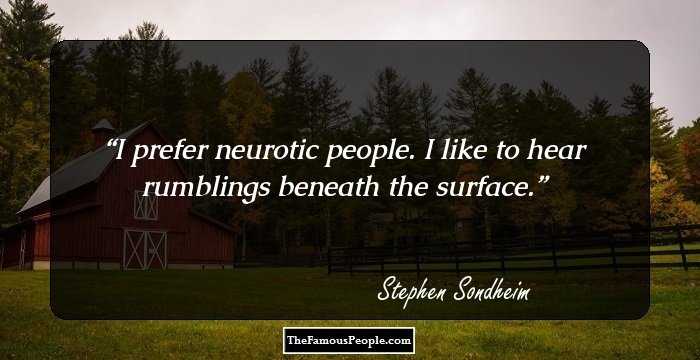 Quotes: Like, I
Major Works
In 1970, Sondheim kick-started his association with Harold Prince, in style, with the concept musical ‘Company’. The musical narrates incidents from the life of a single man who is unable to commit to a relationship. It was unconventional as it featured a set of characters and themes instead of a straightforward plot and ran for 705 performances.
The 1973 musical ‘A Little Night Music’, inspired by the film ‘Smiles of a Summer Night’ is considered among Sondheim’s best works, garnering much appreciation for both his music and lyrics. The musical also won numerous awards.
‘Sweeney Todd’, a 1979 musical thriller with revenge as its central theme is considered one of Sondheim’s most complex compositions. The Harold Prince directed musical has had many revivals and has also been adopted by numerous operas.
Awards & Achievements
In 1973, he was awarded a Grammy Award in the category ‘Best Score from an Original Cast Album’ for his work in the musical ‘A Little Night Music’.
He, along with James Lapine, was awarded the ‘Pulitzer Prize in Drama’ for the musical ‘Sunday in the Park with George’ in 1985.
In 1990, he won an ‘Academy Award’ in the category ‘Best Song’ for his song ‘Sooner or Later’ from the film ‘Dick Tracy’.
He was honoured with a ‘Special Tony Award for Lifetime Achievement in the Theatre’ in 2008 for his countless contributions to musical theatre. 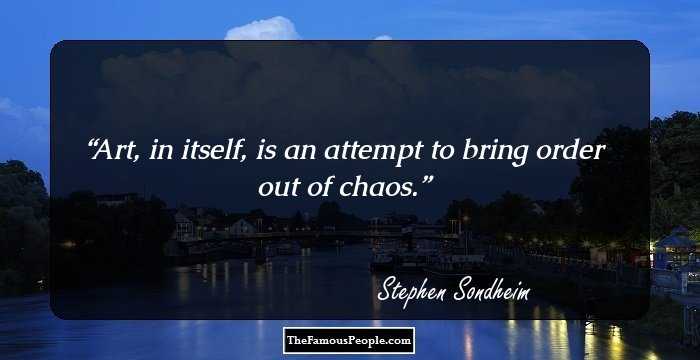 Stephen Sondheim endured a neglected childhood and had a bitter and difficult relationship with his mother.

Post his parents’ divorce, after moving to rural Pennsylvania in 1940, he formed a close relationship with Oscar Hammerstein II. Apart from tutoring him in musical theatre, Hammerstein was like a father-figure to Sondheim.

He was a homosexual and was involved in some short-lived relationships during the 1970s and the 1980s. His first long-term relationship was with dramatist Peter Jones.

Stephen Sondheim was also a puzzle enthusiast and published many cryptic crosswords in ‘New York Magazine’.

In 2010, many concerts were held in celebration of Sondheim’s 80th birthday. The ‘New York Philharmonic’, for which Sondheim was the conductor in the 1960s, organized a concert titled ‘Sondheim: The Birthday Concert’. It featured many of Sondheim’s music and songs, some of which were performed by the original performers.

Quotes By Stephen Sondheim | Quote Of The Day | Top 100 Quotes

See the events in life of Stephen Sondheim in Chronological Order