Sophie Simnett is a British actress who is best-known for her portrayal of Skye Hart in the Disney channel series ‘The Lodge’. Simnett began her career at an early age and started playing different roles in TV series. Her first role was in a TV series in 2015. Though the role was short, she was noticed and soon earned more projects. She has mainly played teen roles due to which she became famous. Her role as a teenager in the film ‘Mum’s List’ helped her earn fame and appreciation. In the following years, she was also seen in drama TV series ‘Endeavour’ and ‘Ransom’. Apart from acting, Simnett has also been singing in number of music videos. British People
British Actresses
Sagittarius Actresses
Actresses Who Are In Their 20s
Women Film & Theater Personalities
Career
Sophie Simnett is a British actress who rose to fame due to her role in the Disney Channel’s drama TV series ‘The Lodge’ as Sky Hart. She started her acting career at the age of six and appeared in few TV series. Her first role was in the TV series ‘Dickensian’ in 2015. The drama series was set in the fictional world of Charles Dickens’ famous novels. Simnett made a guest appearance and was only seen in one episode. In 2016, she was seen in ‘Mum’s List’ which was a TV series based on the best-selling novel by St. John (Singe) Greene. In this TV show, Simnett played the role of young Kate which earned her fame and recognition. In the same year, she was also seen in another TV series ‘The Five’ as Scarlett or Blonde Student. ‘The Five’ was a mystery crime series wrote by author Harlan Coben. Simnett was a guest character in the show and only appeared for three episodes.
Her breakthrough performance was in ‘The Lodge’ which premiered in 2016. The show was about teenage girl who takes responsibility of her Grandfather’s Lodge. Unlike all other shows, Simnett was the protagonist in this show. Other than this, she was seen as Pippa Leyton in the TV series ‘Endeavour’. In this crime, mystery drama, Simnett appeared in two episodes. In 2017, Simnett earned another TV series ‘Ransom’ where she played the role of Sofia Bonnar.
Other than acting, Simnett has also ventured into singing. She has lent her voice in the TV series ‘The Lodge’ in 2016. The songs that Simnett performed are ‘Favourite Place To Be’, ‘If You Only Knew’ (Duet), ‘Tell It Like It Is’ (Duet).
You May Like

British Film & Theater Personalities
British Female Film & Theater Personalities
Sagittarius Women
Continue Reading Below
Personal Life
Sophie Simnett was born on December 5, 1997, in London, England. Originally, she is from Chiswick, West London, and went to Putney High School. During her high school years, she was a drama scholar. In addition to this, she has also attended many film and drama courses. Despite being offered many drama courses at Bristol, Surrey, Warwick and Royal Holloway, she refused to join the University to focus on better projects. Besides acting, Simnett can sing and also play the ukulele.
Sophie Simnett is rumoured to be dating her co-star, Luke Newton, from ‘The Lodge’. Her posts on the social media seem to suggest that the couple are happy and going strong. 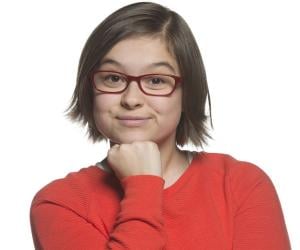