Paul McCartney is an English musician and a former member of the legendary music band ‘The Beatles’. A multiple Grammy Award winner, he is also a two-time inductee into the Rock and Roll Hall of Fame (as a member of The Beatles in 1988, and as a solo artist in 1999), and one of the most successful composers and performers of all time. With his unprecedented success as a musician he has achieved a legendary status, and is regarded as one of the icons of 20th century English music. He loved music from a young age and was influenced by his father who was a trumpet player. He began writing songs as a teenager and started playing the guitar. As a young man he met John Lennon in a church festival and Lennon who played with a band invited Paul to join them. Soon other aspiring musicians too joined the group, and thus ‘The Beatles’ was born. Over the next few years ‘The Beatles’ went on to achieve phenomenal fame and all the group members, including Paul McCartney became internationally famous. He was already an influential figure by the time The Beatles broke up and easily embarked on a successful solo career. Along with all his musical achievements, he is also well-known for his philanthropic activities and social activism Nancy Shevell
DID WE MISS SOMEONE?
CLICK HERE AND TELL US
WE'LL MAKE SURE
THEY'RE HERE A.S.A.P
Quick Facts

British People
Pop Singers
Rock Singers
Lyricists & Songwriters
British Men
Childhood & Early Life
He was born as James Paul McCartney on 18 June 1942 in Liverpool, England. His mother Mary Patricia was a midwife while his father James McCartney was a cotton salesman and jazz pianist with a local band. He has one younger brother.
He attended the Stockton Wood Road Primary School where he met and befriended George Harrison.
Paul McCartney’s mother died of breast cancer when he was just 14. The loss of his mother shattered the young boy.
As a teenager, he met John Lennon at a church festival. Since John too had lost his mother at a young age, the two boys bonded quickly and became friends. John had a band called the ‘Quarrymen’ and invited Paul to join the band. 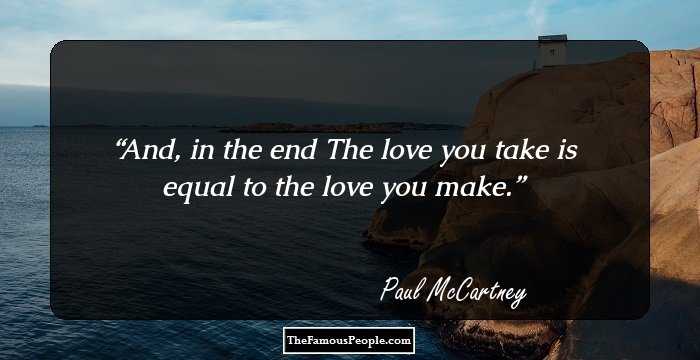 Quotes: You, Love
Continue Reading Below
Career
Over the next few years, the band adopted the name, ‘The Beatles’. It also saw many changes in the personnel and by 1962 he line-up consisted of Paul McCartney, John Lennon, George Harrison, and Ringo Starr.
The band’s first single, “Love Me Do”, principally written by Paul McCartney in collaboration with Lennon was released in 1962. The single became a hit and the Beatles became very popular.
In 1965 the group released their album, ‘Help!’ which spawned the hit single “Yesterday” written by Paul McCartney. The song went on to become one of the most covered songs in the history of recorded music with more than 2,200 cover versions.
Paul McCartney gave the group an idea for a concept album, ‘Sgt. Pepper's Lonely Hearts Club Band’ which was released in 1976 to immediate success. It performed well commercially and was also critically acclaimed. It spent 27 weeks at the top of the albums chart in the United Kingdom and won four Grammy Awards in 1968.
Even though the band achieved phenomenal popularity and widespread success, the relations between the band members became strained and they started having frequent disagreements. Thus Paul McCartney left the band in 1970.
In 1971, he along with his wife Linda McCartney, session drummer Denny Seiwell, and former Moody Blues guitarist Denny Laine formed the rock band ‘Paul McCartney and Wings’.
Paul McCartney and Wings released several albums over the next decade including ‘Red Rose Speedway’ (1973), ‘Band on the Run’ (1973), ‘Venus and Mars’ (1975), ‘Wings at the Speed of Sound’ (1976), and ‘Back to the Egg’ (1979). The group disbanded in 1981 following disagreements over royalties and salaries.
The 1980s was a difficult time for Paul McCartney. He had become a drug addict and was arrested for possession of marijuana and fined. The same decade also saw the murder of his former partner, John Lennon, which deeply disturbed him. Even though he continued creating music, he could not achieve much success during this period.
During the 1990s, he collaborated with Martin Glover—popularly known as Youth—who was bassist of the rock band ‘Killing Joke’ and formed the band ‘The Fireman’. They came out with the album ‘Strawberries Oceans Ships Forest’, in 1993. The same year, McCartney released the rock album, ‘Off the Ground’.
Continue Reading Below
He took a break from his solo career to work on ‘The Beatles Anthology’, a documentary TV series, a three-volume set of double albums, and a book focusing on the history of The Beatles. All the three surviving Beatles, Paul McCartney, George Harrison and Ringo Starr, participated in the making of the works.
He continued touring, performing and recording new albums well into the new millennium even though he was now in his sixties. The albums he released during this period include ‘Ecce Cor Meum’ (2006), ‘Memory Almost Full’ (2007), and ‘Electric Arguments’ (2008). 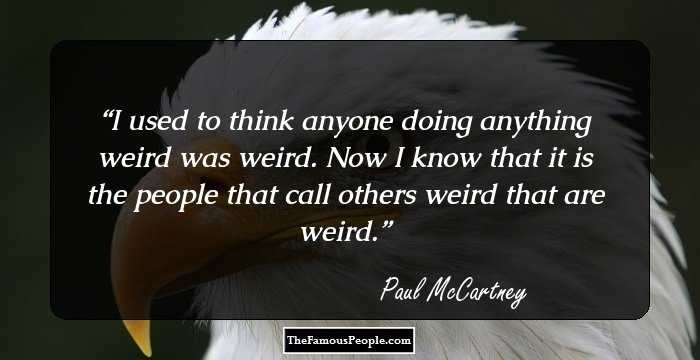 Quotes: Think, I
Major Works
His debut studio album, ‘McCartney’, released in 1970 peaked at No. 1 position on the US Billboard 200 chart and remained there for three weeks; it reached No. 2 in Britain.
The album ‘Band on the Run’ released by Paul McCartney and Wings, became the top-selling studio album of 1974 in the United Kingdom and Australia. It was eventually certified triple platinum by the Recording Industry Association of America and remains his most successful album till date.
Awards & Achievements
Paul McCartney is a 21-time Grammy Award winner, including 12 as a member of ‘The Beatles’ and six as a solo artist.
He was inducted into the Rock and Roll Hall of Fame twice: Class of 1988 as a member of the Beatles and Class of 1999 as a solo artist.
In 1997, he was knighted by Queen Elizabeth II for his services to music.
He received the Gershwin Prize for his contributions to popular music in 2010.
He received the French Légion d'Honneur for his services to music in 2012. 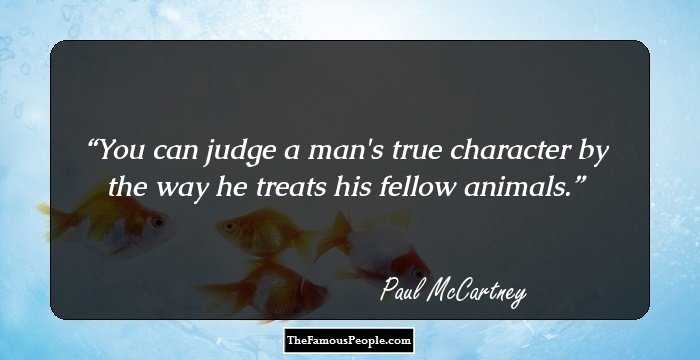 Quotes: You, Character
Personal Life & Legacy
As a popular musician he had been involved with several women in his younger days. He met Linda Eastman, a photographer, in 1967 and married her in 1969. He adopted Linda’s daughter from a previous relationship, and went on to have three more children. They remained married until Linda’s death from breast cancer in 1998.
In 2002, Paul McCartney married Heather Mills, a former model. The couple had a daughter but the marriage did not last long. They had a bitter divorce in 2008.
He married New Yorker Nancy Shevell in 2011.
He in actively involved in several philanthropic activities. He is a strong advocate of vegetarianism and animal rights, and also champions a number of humanitarian causes, and supports charities that fight cancer.

Quotes By Paul McCartney | Quote Of The Day | Top 100 Quotes

See the events in life of Paul McCartney in Chronological Order 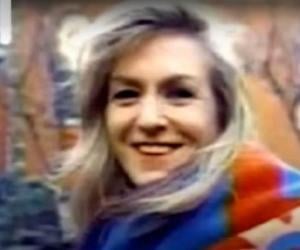 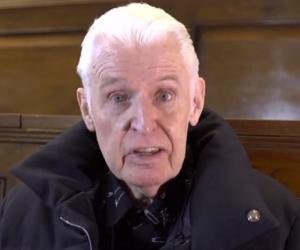