One of the most popular and legendary comedians, the name of Charlie Chaplin is eternally synonymous with comedy and humour. He was easily one of the greatest stars in the silent film era and left audiences in a riot of laughter with his rib-tickling screen persona. In a career spanning over seventy five years, Chaplin gave many memorable and great performances. This versatile comic genius acted, directed, produced, wrote and composed music for almost all of his films and was recognized as ‘The Little Tramp’, the character he played in his films. An icon in world cinema, Chaplin is widely accepted as one of the founding fathers of the genre of comedy and has influenced an array of filmmakers and comedians. Even today, many of his films are extremely popular and are hailed as classics. Some of his greatest films include ‘Modern Times’, ‘The Great Dictator’, ‘The Gold Rush’, ‘The Immigrant’ and ‘The Kid’. British Celebrities
Directors
British Men
Aries Actors
British Actors
Childhood & Early Life
Charles Spencer Chaplin was born into a family of entertainers to Hannah Chaplin and Charles Chaplin Sr.- both of whom were music hall entertainers.
His childhood was marked with poverty and struggle. His parents did not earn much and hence he started to work at a workhouse at the age of seven.
In 1898, his mother was admitted to a mental asylum, after she was diagnosed with psychosis. This deeply affected him and soon his father too became a severe alcoholic and he was left to fend for himself. 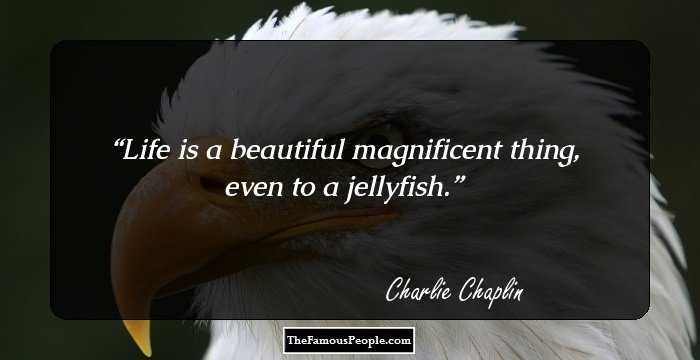 Quotes: Life, Beautiful
Continue Reading Below
Career
He became a member of the male dance troupe, ‘The Eight Lancashire Lads’ and toured across the music halls in Great Britain, all through 1899 and 1900.
In 1903, he was cast in his first show titled ‘Jim, a Romance of Cockayne’, in which he played the role of a newsboy. The show opened in July that year, in the ‘Kingston upon Thames’ in Southwest London and was not very successful.
From October 1903 to June 1904, he travelled with Saintsbury, and his plays were immensely successful, which lead him to travel to London to act with William Gillette, an actor.
In 1906, he became part of the amateur comedy troupe ‘Casey's Circus’. He performed comedy acts with them and soon rose to prominence. When the troupe finished touring in July 1907, Charlie was left without a job for a few months and lived with a family in Kennington.
In 1910, he played the lead role in the sketch ‘Jimmy the Fearless’, which was an immediate success and soon after he started getting a lot of media attention, which catapulted his fame and popularity.
In 1913, he signed a contract for a period of one year with the New York Motion Picture Company, which promised him a pay of $150 a week.
In 1914, he made his feature film debut with ‘Making a Living’, in which he played, ‘Edgar English’, a womaniser.
In 1914, he appeared in several films for Keystone Studios including, ‘Kid Auto Races at Venice’, ‘Between Showers’, ‘A Film Johnnie’, ‘His Favorite Pastime’ and ‘Tillie's Punctured Romance’.
In 1915, he also directed and wrote films for the Essanay Film Manufacturing Company. Some of them include ‘A Night Out’, ‘The Champion’, ‘The Tramp’, ‘Work’, ‘A Woman’, ‘The Bank’,’ Triple Trouble’ and ‘Police’.
Continue Reading Below
From 1916 to 1917, he worked for the ‘Mutual Film Corporation’ - he directed, wrote, produced and acted in their films. Some these films included — ‘The Floorwalker’, The Vagabond’, ‘The Pawnshop’, ‘The Count’, ‘The Cure’ and ‘The Adventurer’.
From 1918 to 1923, he made a total of nine films which were distributed by the ‘First National Exhibitors' Circuit’. Some of the films were ‘A Dog’s Life’, ‘The Bond’, ‘The Kid’, ‘Pay Day’, ‘The Pilgrim’, ‘Sunnyside’ and ‘The Idle Class’.
From September 26, 1923 onwards, he released his films under the United Artists label. He directed, acted, produced, wrote and composed tunes for many of these movies.
In 1925, his Academy Award winning film ‘The Gold Rush’, which he directed, starred in and produced, was released. It is one of his classics and most memorable films.
In 1928, his film ‘The Circus’ was released. In this 70-minute silent film, he played the role of a clown. It was one of his highest grossing silent films.
Released in 1936, one of his most remembered films, ‘Modern Times’, is a satirical portrayal of struggle to cope in the industrialised world. The film is considered one of his most popular silent films.
In 1940, he came up with ‘The Great Dictator’, which was one of his most commercially successful films. He played the role of a Jewish barber in the film.
In 1952, his Academy Award winning film ‘Limelight’ was released. The film was set in London, during the eve of World War I and he played the role of a former clown named ‘Calvero’.
In 1957, he directed and acted in the comedy film ‘A King in New York’, a satirical film about the political and social life in the United States of America. The film was only a moderate success and received mixed reviews.
Continue Reading Below
Released in the year 1967, ‘A Countess from Hong Kong’, was his last film. 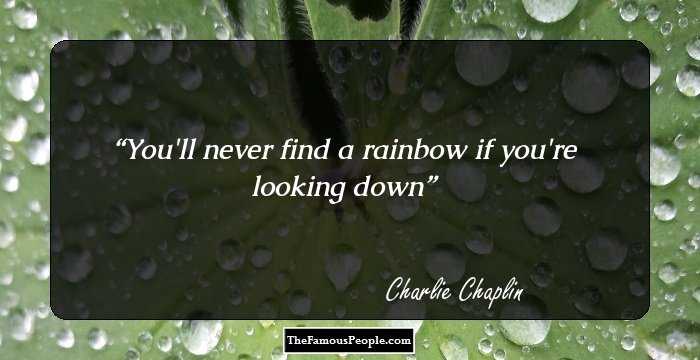 Quotes: Never
Major Works
‘Modern Times’ was selected to be preserved at the Library of Congress, United States and it was ranked 33rd on the American Film Institute’s list of ‘100 Years…100 Laughs’, as one of the 100 funniest movies in America.
‘The Gold Rush’ was rated as the ‘second greatest film in history’ by the critics of The Brussels World’s Fair, a worldwide organisation of filmmakers. It was also selected to be preserved at the United States National Film Registry by the Library of Congress.
Awards & Achievements
In 1929, he was the recipient of the Honorary Academy Award for ‘versatility and genius in acting, writing, directing and producing.
In 1972, he received the Honorary Academy Award for ‘the incalculable effect he has had in making motion pictures the art form of this century’.
In 1972, he received a star on the Hollywood Walk of Fame.
In 1973, he received the Academy Award in the category, ‘Best Music, Original Dramatic Score’ for the film ‘Limelight’. 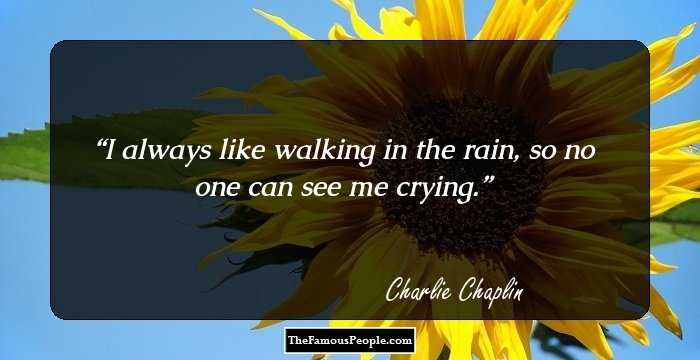 Quotes: Me, Like, I
Personal Life & Legacy
He married four times and three of his marriages with Mildred Harris, Lita Grey and Paulette Goddard ended in divorce.
In 1943, he married his fourth wife Oona O'Neill and the couple had eight children together. They remained together until his death.
He died at the age of 88 in his sleep, after he suffered from a stroke. He was laid to rest at the Vevey cemetery, Switzerland.
To honour his achievements, ‘Charlie Chaplin – The Great Londoner’, an exclusive exhibition on his life was opened at the London Film Museum in 2010.
Trivia
This award-winning comedian was 54 when he married his fourth wife, who, at that time, was 18. The couple had a 36 year age difference, which generated a great deal of media attention.

Quotes By Charlie Chaplin | Quote Of The Day | Top 100 Quotes

See the events in life of Charlie Chaplin in Chronological Order