Advanced Search
Shirley Chisholm was a political leader with a strong moral sense and courage to stand up for her beliefs. She spent her childhood in Barbados with her grandmother, and realized the importance of the traditional British-style education she received there. The education incorporated strong ideals in her, which shaped her future career. She started off as a teacher and was concurrently involved in political activities as well. Her strong leadership skills led her to eventually join politics, in spite of her being, as she herself termed it, a “double handicap”—both black and a woman. Chisholm swiftly made a name for herself with her brand of fearless politics. She highlighted key issues throughout her career, especially those regarding education opportunities, racial equality and women empowerment. Her decision to run for presidency was an attempt to make a statement, to make people consider African-Americans as-well-as women as serious candidates. Against all odds and in spite of knowing well that she did not possess the required resources to mount a serious challenge, Chisholm went ahead with her campaign and won more delegates than anyone expected. American Celebrities
Political Leaders
Black Political Leaders
American Women
Columbia University
Childhood & Early Life
Shirley Chisholm, named Shirley Anita St. Hill at birth, was born to Charles Christopher St. Hill and Ruby Seale in Brooklyn, New York. Both her parents were immigrants. Her father was a factory worker from Guyana and her mother was a seamstress and a domestic worker.
When she was three years old, she was sent to her grandmother Ruby Seale in ‘Christ Church, Barbados’, so that she could receive a good education. There, she did her schooling in ‘Vauxhall Primary School’.
In 1934, she returned to her parents in New York and studied in ‘Girls’ High School’. After finishing her schooling, she did her BA from ‘Brooklyn College’.
Chisholm worked as a teacher in a Nursery school and also in a child-care centre. Simultaneously, she attended evening classes at ‘Columbia University’, pursuing an M.A. in elementary education, which she completed in 1952.
During this period, she became involved in various groups in college. She started to cultivate an interest in politics and began organizing and fund-raising. 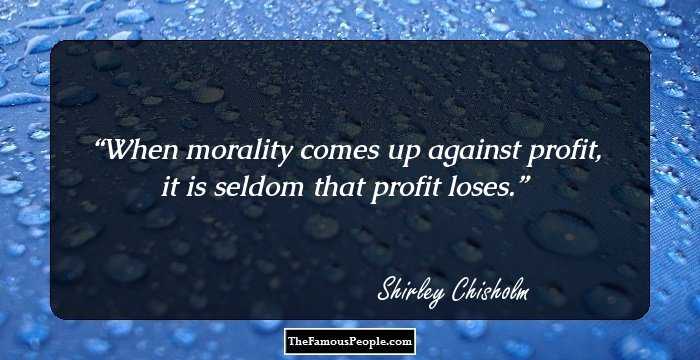 Continue Reading Below
Career
Chisholm was the director of ‘Hamilton-Madison Child Care Center’ from 1953 to 1959. She became associated with the Democratic Party at this time and spoke out against the minimal role of women, African-Americans and the poor in politics.
She worked as an educational consultant at the ‘New York City Division of Day Care’ from 1959 to 1964. During this time she joined the ‘Unity Democratic Club’ that worked for the equal rights for black people. She was removed from the board of directors for speaking against the white leaders.
In 1964, her political career truly began as she successfully contested for the ‘New York State Assembly’. Throughout the four years, she served in the assembly she promoted 50 bills, out of which 8 were passed.
In 1968, buoyed by her successful tenure in the assembly, Chisholm ran for the Congress as a ‘Democratic Candidate’ and defeated Republican candidate James Farmer. Her campaign slogan was “Unbought and Unbossed”.
During her term from 1968 to 1972, she was initially assigned to the ‘Agriculture Department’. She asked to be reassigned because she wanted to help the poor people of her district. She was then assigned to the ‘Veterans’ Affairs committee’ and later to the ‘Education and Labor Committee’.
In 1972, Chisholm ran for Democratic Party’s Presidential nomination to contest for presidency. Although she did not win, she managed to get 152 delegates and won the primaries in three states.
Throughout her term, she kept making substantial contributions. Most notably, she worked to pass a bill for minimum wages to domestic workers, worked to provide more opportunities for residents of poorer neighbourhoods spoke against the US military draft and opposed US’ involvement in the Vietnam War.
Chisholm retired from Congress in 1982 and resumed her teaching career, while being active in politics too.
From 1983 to 1987, she was named to the Purington Chair at ‘Mt. Holyoke College’ in Massachusetts, and also taught politics and women’s studies. In this period, she also campaigned for presidential candidate Jesse Jackson, was a visiting scholar at ‘Spelman College’ and co-founded the ‘National Political Congress of Black Women’.
Continue Reading Below
She moved to Florida in 1991 and two years later, she was nominated to serve as US ambassador to Jamaica, but declined the position because of her poor health. 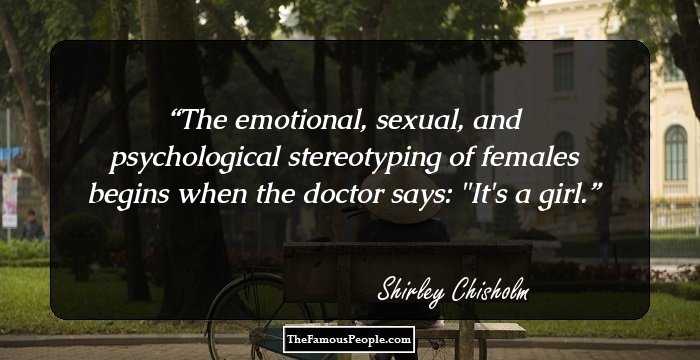 Major Works
In 1971, Chisholm co-founded the ‘Congressional Black Caucus’, an organization consisting of African-American members of the Congress. It worked towards issues relevant to African-Americans and achieving their equality in the country.
Awards & Achievements
In 1993, Shirley Chisholm was inducted into the ‘National Women's Hall of Fame’, an American institution honouring outstanding contributions to the country in various fields.
Famous scholar and philosopher Molefi Kete Asante listed her as one of the ‘100 Greatest African Americans’. 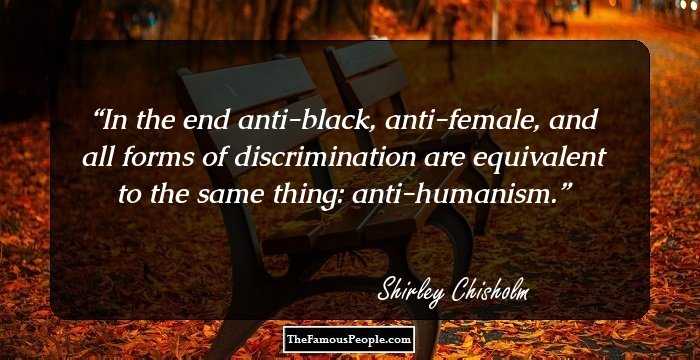 Personal Life & Legacy
In 1949, Chisholm married Conrad Chisholm, a private investigator who was also involved in local politics. The marriage lasted for about twenty-eight years before ending in divorce.
In 1978, she married a businessman, Arthur Hardwick, who died in 1986. At the age of eighty, she died in Florida, after suffering a series of strokes.
In college, she was influenced by Louis Warsoff, a blind political science professor who encouraged Chisholm to consider politics because of her “quick mind and debating skills”.
She died on January 1, 2005, in Ormond Beach near Daytona Beach, after suffering several strokes.
Trivia
When African-American students were barred from joining a social club at a college, this famous student of that college started her own club called ‘Ipothia’, an acronym for ‘In Pursuit of the Highest In All’.
This ground-breaking politician became not only the first African-American Congresswoman, but also the first African-American woman to run for presidency. She also survived three assassination attempts during her trailblazing campaign.

Quotes By Shirley Chisholm | Quote Of The Day | Top 100 Quotes

See the events in life of Shirley Chisholm in Chronological Order