Shawn Johnson is a retired American artistic gymnast who won balance beam gold at the Beijing Olympic Games. Introduced to gymnastics at the age of three, she plunged into gymnastics full-time to become a professional gymnast. Shawn Johnson started competing in national junior events at the age of 12 and was a part of various national and international events as a senior, winning a number of titles. She is a three-time holder of US all-around championship—once as a junior and twice as a senior. By winning gold in the all-around competition in 2007 World Championship in Stuttguart, she became the fourth American woman to claim a World Championship title in the event. Besides, she also bagged the world title in floor exercise. As a 16-year old rising star, she went on to rule the world of gymnastics by striking gold in the balance beam event at the 2008 Summer Olympics, held in Beijing. Further, she also won silver in team, all-around and floor events at the Beijing Olympics. She has been honored with numerous awards for her contribution to gymnastics. She was crowned the winner of ‘Dancing with the Stars’ season eight in 2009 and finished second in its all-star edition in 2012 Aly Raisman
Gymnasts #15
Sportspersons #799
Continue Reading Below
DID WE MISS SOMEONE?
CLICK HERE AND TELL US
WE'LL MAKE SURE
THEY'RE HERE A.S.A.P
Quick Facts

American People
Short Celebrities
Short Female Celebrities
Women Gymnasts
American Gymnasts
Childhood & Early Life
Shawn Machel Johnson was born on January 19, 1992, in Des Moines, Iowa, as the only child of Doug and Teri Johnson.
Her young stints of jumping off furniture persuaded her parents to put her to gymnastics classes at the young age of 3.
When she turned six, she was enrolled at a gymnastics school in West Des Moines under instructor Liang Chow.
She went to Valley High School, West Des Moines, where she was actively involved in extra-curricular activities, apart from excelling in studies.
In 2009, she quit public school and moved to Los Angeles, California, with her mother. She completed her school privately in 2010.
She is pursuing nutrition and sports psychology from Vanderbilt University, Nashville, since 2013. 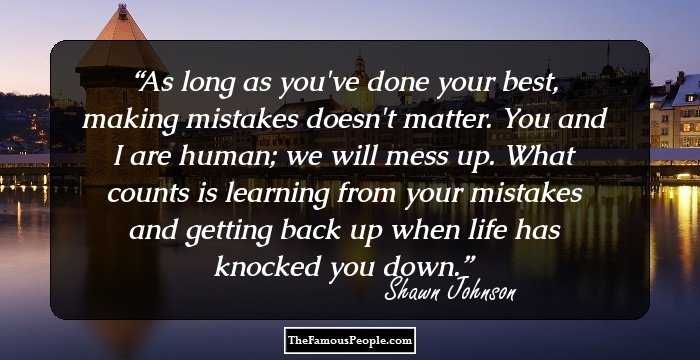 Quotes: You, Life, Will, Learning, I
Continue Reading Below
You May Like

The Hottest Male Celebrities With The Best Abs
Career
Shawn Johnson began her professional career at 12, by participating in the Junior Olympics National Championships, where she stood first on beam and second on floor, thereby finishing fourth in the all-around.
In 2005, she was invited to the national team training camp by Marta Karolyi, National Team Coordinator, after seeing a video sent by Chow.
She was selected for the Junior International Elite and finished third in the 2005 UC Classic. She stood tenth in all-around at the 2005 US National Championships, after accidentally falling off the beam.
She returned in 2006 with a new trick, Jaeger on bars, and two top-difficulty skills – full-in back-out dismount off beam and double-twisting double back on floor. Eventually, she won the US Junior National All-Around Championship.
She entered the senior division in 2007 by competing in the Tyson American Cup, where she bagged the all-around title.
In 2007, she participated in Pan American Games and clinched four gold medals: team, all-around, beam, and bars, and a silver medal in floor. Subsequently, she won gold in the all-around at the 2007 Visa US National Championships.
In 2007, she debuted at the World Artistic Gymnastics Championships, becoming the only US athlete to participate in all four events: floor, beam, vault, and bars. She won the gold in floor and all-around and helped the US team in winning the gold.
Her participation in the 2008 American Cup won her silver in the all-around, and gold in the floor, balance beam, and vault events.
She competed in the 2008 Visa US Championships and won gold in all-around and floor, along with silver in balance beam.
Continue Reading Below
In 2008, she participated in the US Olympic Trials, held in Philadelphia, and was selected in the 2008 US Olympic gymnastics team after her phenomenal performance in all the events.
She competed in the 2008 Summer Olympics, held in Beijing, and won four medals: a gold medal in the balance beam and silver medals in floor exercise, all-around and team events.
She was signed by a number of brands for their advertisements and campaigns post her appearance in Beijing Olympics, namely, Hy-Vee, Ortega, McDonalds, CoverGirl, Secret deodorant, and Coca-Cola.
In 2009, she participated in season 8 of ‘Dancing with the Stars’, with professional dancer Mark Ballas as her partner, and won the dance reality competition.
She injured her anterior cruciate ligament (ACL) while skiing in January 2010 and had to undergo reconstructive knee surgery. While recovering, she announced her plan to start training for 2012 London Olympics in May.
She was selected in the Pan American Games team in 2011. She won a gold medal in the team competition and a silver medal in the uneven bars.
In June 2012, Shawn Johnson announced her retirement from competitive gymnastics following continuous problems in her left knee due to torn ACL, thereby pulling out of the London Olympics.
She participated in season 15 of ‘Dancing with the Stars’ in 2012 on its all-star edition, partnered with Derek Hough, and was announced runner-up.
She has made appearances on a number of chat shows, such as ‘The Tonight Show with Jay Leno’, ‘The Oprah Winfrey Show’, ‘Jimmy Kimmel Live!’, ‘The Today Show’, ‘Late Show with David Letterman’, and ‘Entertainment Tonight’.
Continue Reading Below
She has published two books, recollecting her journey as a top gymnast and life after Olympics – ‘Shawn Johnson: Olympic Champion: Stories Behind the Smile’ (2008) and ‘Winning Balance’ (2012).
She has endorsed numerous top-notch brands, like Nike, Cheerios, Longines, Sanofi-Aventis, Nestle, Bounty, Crest, Circuit City, InterContinental Hotels Group, and Oroweat.
In January 2015, she turned special correspondent for KCCI-TV’s INSIDE EDITION, reporting from Phoenix on all Super Bowl XLIX events, covering the entire game, exclusive interviews, and behind-the-scene previews.
She was part of the American television reality game show, ‘The Celebrity Apprentice 7’, aired on NBC network, but was eliminated in task six. 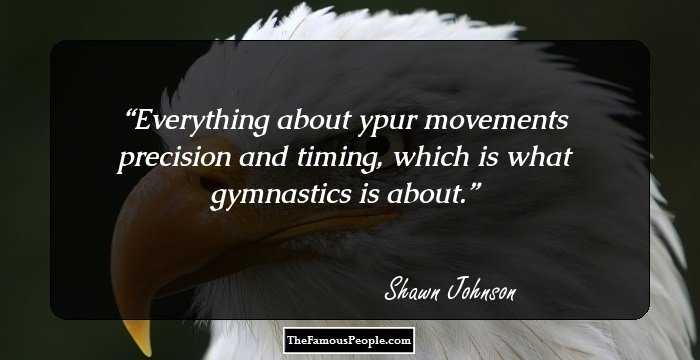 Awards & Achievements
In 2007, she was honored with the ‘Longines Prize for Elegance’ in Stuttgart, Germany. Also, after her stint at the World Championships, October 17 was declared ‘Shawn Johnson Day’ by Iowa’s Governor Chet Culver.
She was voted fifth in the ‘Female Athlete of the Year’ list by Associated Press and won the ‘Athlete – Female’ Teen Choice Award, in 2008.
In 2009, she was ranked at #27 in the ‘100 most searched females on the Internet’, and was voted as ‘America’s Most-Liked Sports Figure’ by Forbes magazine.
The ‘Des Moines Register’ voted her the ‘most famous living sports figure’ in 2010.
She was inducted into the USA Gymnastics Hall of Fame in 2013, along with her teammates of the 2007 World Championships.
Personal Life & Legacy
Shawn Johnson is reportedly in a romantic relationship with Andrew East, a football player from Vanderbilt University.
A life-size bronze statue has been dedicated to this distinguished gymnast in the Iowa Hall of Pride in Des Moines. 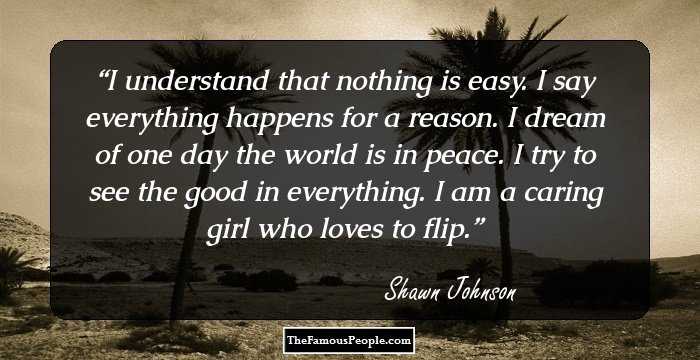 See the events in life of Shawn Johnson in Chronological Order