Sarah Bernhardt was a grand theatrical diva of all times who graced the French stage even before Hollywood was born. Called by her admirers as the ‘Divine Sarah’, she is known to be the first international stage star ever. It is hard to segregate her life from art as it was deeply engraved in the core of her being. All the artistic pursuits which she undertook carried an essence of her surpassable talent. As a child, Sarah was quite sensitive to her surroundings, absorbing all the elements she could in her ethereal self. She paved way for several young woman of the 19th century France, bringing into light a whole new world of theatrical arts. Sarah was a highly endowed artist as she touched many facets of arts, dignifying them with her mesmerizing charisma. She was a virtuoso performer and introduced the world to grandness of theatrical arts along with the modus operandi involved. She extended her horizon, undertook many tours across Europe and America, and gained recognition as well as love of people across the globe. Her contribution to the field of performing arts is paramount and will be treasured forever. Eva Green
Actresses #2359
Film & Theater Personalities #6173
DID WE MISS SOMEONE?
CLICK HERE AND TELL US
WE'LL MAKE SURE
THEY'RE HERE A.S.A.P
Quick Facts

Cause of Death: Uremia

French Celebrities
Libra Actresses
French Actresses
Women Film & Theater Personalities
French Film & Theater Personalities
Childhood & Early Life
Born Henriette-Rosine Bernard, she was the illegitimate daughter of a Jewish lady Judith who had established herself in France. Judith was a courtesan and was just 16 when Sarah was born. In her initial years, she was sent to live with a wet nurse in Brittany, Paris.
In 1851, she was enrolled in Madame Fressard’s school for young ladies. After two years, she was admitted to Notre Dame du Grandchamp, an Augustine convent school near Versailles, by the influence of one of her mother’s patrons, Duc de Morny.
In 1860, she joined the Conservatoire de Musique at declamation in Paris, the government-sponsored acting school. She soon left it as she found its methods obsolete. 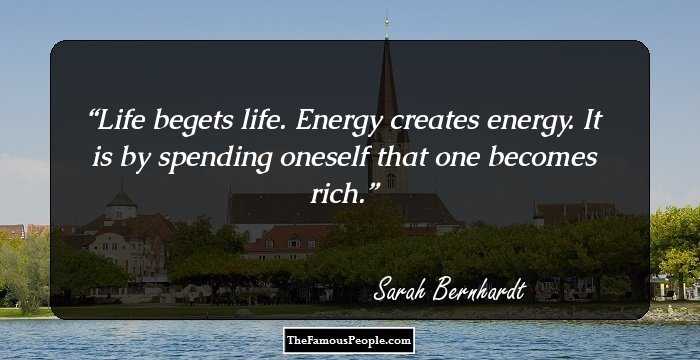 Who Is The Most Popular BTS Member?
Career
In 1862, she joined the national theater company, the Comedie-Francaise, as a beginner. She debuted there in the lead role of Jean Racine’s ‘Iphigenie’. She was terminated in the following year for her bad demeanor.
In 1866, she signed a contract with Theatre de L’Odeon where she played a seductive Anna Damby in Alexander Dumas’s ‘Kean’ and Cordelia in Shakespeare’s ‘King Lear’. Her breakthrough performance was that of Florentine minstrel in Francois Coppe’s ‘Le passant’, after which she became the most sought-after actress in Europe.
In 1872, she left the Odeon and returned to the Comedie Francaise. After two years, she made a remarkable success with Voltaire’s ‘Zaire’ and Jean Racine’s ‘Phedre’.
In 1878, she played Desdemona in Shakespeare’s ‘Othello’ and also acted in the second part of ‘Phedre’. These performances soon led her to the stardom and uplifted her international career.
In 1880s, she starred in Victorian Sardou’s plays, ‘Fedora’ (1882), ‘Theodora’ (1884), ‘La Tosca’ (1887) and Cleopatre’ (1890), which Sardou himself directed.
From 1893 to 1899, she ran Theatre de la Renaissance as a producer and director and did many innovative projects. But soon debts bunched up and she had to forsake her position.
In 1899, she re-joined the former Theatre des Nations and assigned a new name to it, ‘Theatre Sarah Bernhardt’, which she supervised until her death.
She played numerous male roles in the course of her career. Her notable appearance as a male includes ‘Hamlet’ in Shakespeare’s Hamlet (1899) and ‘Napoleon’s only son’ in Edmond Rostand’s play L’Aiglon (1900).
In 1920, she performed in Racine’s ‘Athalie’ followed by Louis Verneuil’s ‘Daniel’, ‘Regime Armand’ and Maurice Rostand’s ‘La Gloire’. She was also offered a title role in ‘La Voyante’, a film by Sacha Guitry.
Continue Reading Below
Major Works
In between 1874-1886, she hosted several exhibitions of her paintings, sculptures and portraitures; these art forms she had mastered after establishing herself on the stage. Her works were mainly exhibited in Salon (Paris) but later they were put on display in Columbia Exposition (Chicago) and Exposition Universelle (Paris).
Her role as ‘Hamlet’ in 1899 was received by French audience with considerable enthusiasm. Although her character in the play gathered mixed reviews, when it moved to London it became legendary. She played the role with remarkable dynamism and vigor.
She is well-known for her famous nine ‘Farewell tours’ which she undertook in between 1880 to 1918 in order to promote theatrical art at global level. In the course of these tours, she worked with France’s greatest male actor, Constant-Benoit Coquelin, to perform Edmond de Rostan’s ‘Cyrano de Bergerac’.
In 1907, Sarah wrote an autobiography, ‘Ma Double Vie: memoires de Sarah Bernhardt’ (My double life: memoirs of Sarah Bernhardt). This was followed by a romantic novel ‘Petite Idole’ (the Idol of Paris) in 1920 and ‘L’Art du theatre’ (The Art of Theater) in 1923.
At the age of 65, she played the role of 19 year old ‘Joan of Arc’. It was a crisp example of her courage and indomitable will. Her role was critically acclaimed and she was lauded for her bold performance.
Awards & Achievements
She received a star on ‘Hollywood walk of fame’ posthumously on February 8, 1960 under motion picture category for her achievements in the entertainment industry.
Personal Life
In 1863, Sarah had an affair with a Belgian nobleman, Charles-Joseph Eugene Henry Georges Lamoral de Ligne, with whom she had her only child Maurice Bernhardt. She had two grand-daughters from her son.
In 1882, she married a Greece-born actor Aristides Damala in London. Within few years, their marriage became rocky due to Damala’s drug addiction.
Trivia
In 1865, she bought a coffin for herself and used it as a bed as an approach to augment her preparation for tragedies.
At the commencement of Franco-Prussian war she took a role of nurse on behalf of the French and transformed her theatre into a makeshift hospital to serve wounded soldiers.
She was elated in the company of animals. Her pets included dogs, monkeys, wolves, cheetahs, lions and tigers. She even had lion cubs in a cage in her drawing-room.

See the events in life of Sarah Bernhardt in Chronological Order