Catherine Deneuve is one of the most respected French actresses known for her Gallic beauty as well as for her roles in films by some of the world’s prominent directors. She made her film debut as early as thirteen and went on to perform in more than 120 films in a career spanning over five decades. She has worked with several eminent directors including Roman Polanski, Roger Vadim, Jacques Demy and Luis Buñuel. Though she played small parts in many of her early films, her real breakthrough came with Jacques Demy’s remarkable musical ‘Les Parapluies de Cherbourg’ (‘The Umbrellas of Cherbourg’) in 1964. Her memorable performance as Geneviève Emery in the film paved way to stardom. Thereafter she worked in different genres including comedies, musicals and dramas delivering a wide range of memorable performances with great élan. Some of her notable films are ‘Repulsion’, ‘Belle de Jour’, ‘Tristana’, ‘Mississippi Mermaid’, ‘Hustle’, ‘The Last Metro’, ‘The Hunger’, ‘8 Women’ and ‘Dancer in the Dark’. Her excellent performance as Eliane in the Régis Wargnier directed epic drama ‘Indochine’ fetched her first ever Academy Award nomination for Best Actress. Nominated fourteen times, she has won the César Awards twice for her outstanding performances in ‘The Last Metro’ and ‘Indochine’. Lily-Rose Depp
DID WE MISS SOMEONE?
CLICK HERE AND TELL US
WE'LL MAKE SURE
THEY'RE HERE A.S.A.P
Quick Facts

French People
French Women
Libra Actresses
French Actresses
Actresses Who Are In Their 70s
Childhood & Early Life
She was born on October 22, 1943, in Paris, France, as Catherine Fabienne Dorléac to Maurice Dorléac and Renée Simonot. Both her parents were into acting.
She has two sisters, Françoise Dorléac and Sylvie Dorléac, and one half-sister Danielle, born out of her mother’s past relation.
She studied in Catholic schools. She chose to adopt Deneuve, her mother’s maiden name in her stage name.
She fluently speaks English, Italian and to some extent German. 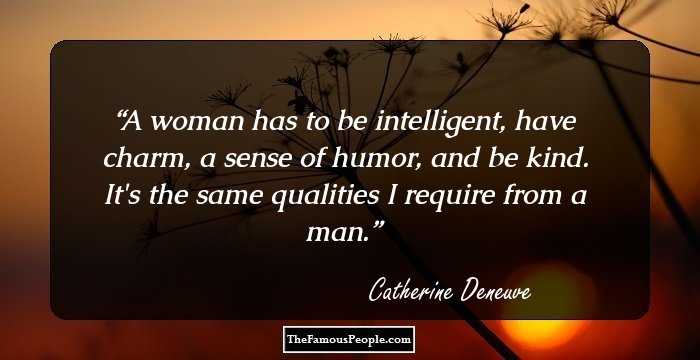 Quotes: I
Continue Reading Below
Career
She made her debut in films in 1957 as a teenager of thirteen in the André Hunebelle film ‘Les Collégiennes’. She was accredited as Catherine Dorléac in the film where her younger sister Sylvie Dorléac also played a part. Later she adopted Catherine Deneuve as her stage name.
Thereafter she did several films including ‘Les Portes claquent’(1960), L'Homme à femmes (1960), ‘Ça c'est la vie’(1962) and ‘Vice and Virtue’ (1963) but could garner little attention.
She landed up with her real breakthrough film in 1964 with the Jacques Demy directed romantic classic ‘Les Parapluies de Cherbourg’ (‘The Umbrellas of Cherbourg’), after the latter saw her performance in ‘L'Homme à femmes’. The film made her a star.
A series of excellent and breathtaking performances by Deneuve followed and displayed her wide range of acting prowess. These include ‘Repulsion’ (1965), a horror flick by Roman Polanski where she played a schizophrenic killer; a homemaker turned prostitute in ‘Belle de Jour’ (1967), a masterpiece by Luis Bunuel; and ‘Tristana’ (1970), yet another excellent piece by Luis Buñuel.
Her place in the entertainment world was further cemented by her remarkable performances in films like ‘The April Fools’ (1969), ‘Mississippi Mermaid’ (1969), ‘Hustle’ (1975), ‘The Last metro’ (1980) and ‘Agent trouble’ (1987) among many others. She won her first ‘César Award for Best Actress’ for ‘The Last Metro’.
She signed the ‘Manifesto of the 343’ in 1972 along with many others who admitted having undergone abortions, thus exposing themselves to judicial prosecution.
She sang duet with Bernadette Lafont in 1975 and with Gérard Depardieu in 1980.
She essayed the character of Miriam Blaylock, a bisexual vampire in one of her American films, ‘The Hunger’ (1983) directed by Tony Scott. Her performance in the film earned her an enduring fan following among the lesbians in the United States.
In 1986 she came up with her own perfume, ‘Deneuve’.
Continue Reading Below
In 1988 she made her debut as producer with the film ‘Drôle d'endroit pour une rencontre’.
One of her most significant films that fetched her first ‘Academy Award for Best Actress’ nomination was the Régis Wargnier directed 1992 film, ‘Indochine’. She was highly acclaimed for her portrayal of Eliane in the film that fetched her second ‘César Award for Best Actress’.
Two of her noteworthy films of the 90s include ‘My Favorite Season’ (1993) and ‘Thieves’ (1996) by André Téchiné both of which fetched her nomination for ‘César Award for Best Actress’. She was also part of the 1999 controversial film ‘Pola X’ directed by Leos Carax.
She also lent her voice in duets with Malcolm McLaren, Joe Cocker and Alain Souchon.
The 1998 film ‘Place Vendôme’ by Nicole Garcia not only won her the ‘Volpi Cup’ at the ‘Venice Film Festival’ but also earned her kudos for her performance as Marianne Malivert.
She appreciated ‘Breaking the Waves’ (1996) so much that she sent a personal letter to its director Lars von Trier showing her eagerness to act under his direction. This led to her supporting role as Kathy in Trier’s musical drama, ‘Dancer in the Dark’ in 2000. She was nominated for ‘Satellite Award for Best Supporting Actress – Motion Picture’ for her role.
She was part of the star packed film, ‘8 Women’ in 2002 that was directed by François Ozon. She shared two awards for her performance in the film, the ‘European Film Award for Best Actress’ and the ‘Silver Bear Award for Best Ensemble Cast’ at the ‘Berlin International Film Festival’.
Her diary ‘A l'ombre de moi-meme’ published in French and as ‘Close Up and Personal: The Private Diaries of Catherine Deneuve’ in English in 2005 gives an account of her experiences for the films ‘Indochine’ and ‘Dancer in the Dark’.
Her other notable films of the 21st century include ‘The Musketeer’ (2001), ‘A Christmas Tale’ (2008), ‘Potiche’ (2010), ‘The Beloved’ (2011), ‘In the Courtyard’ (2014) and ‘Standing Tall’ (2015).
Continue Reading Below
Her upcoming films include Paul Vecchiali film ‘Le Cancre’ and Martin Provost film ‘The Midwife’ slated for release in 2016 and 2017 respectively.
She was associated with several brands including ‘American Home Products’, ‘L'Oréal Paris’ and ‘Louis Vuitton’. Deneuve is also a designer of jewellery, glasses, greeting cards and shoes. 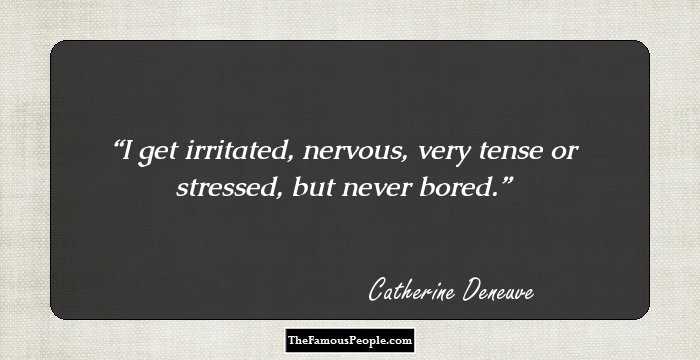 Quotes: Never
Personal Life & Legacy
She was in a relationship with director Roger Vadim with whom she had a son, Christian Vadim on June 18, 1963. Christian Vadim is presently an actor.
From 1965 to 1972, she was married to photographer David Bailey.
She was romantically involved with actor Marcello Mastroianni with whom she worked in five films, ‘It Only Happens to Others’ (1971), ‘Love to Eternity’ (1972), ‘A Slightly Pregnant Man’ (1973), ‘Don't Touch the White Woman!’ (1974) and ‘One Hundred and One Nights’ (1995). On May 28, 1972, her daughter Chiara Mastroianni was born out of her relation with Marcello Mastroianni. Chiara is also an actress.
She also had romantic relationships with tycoon Pierre Lescure and director François Truffaut.
Humanitarian Work
She was associated with organisations like ‘Orphelins Roumains ‘, ‘Reporters Without Borders', Children of Africa, and ‘Children Action,’.
She participated for the cause of ‘Handicap International’, ‘Douleur sans frontiers’, ‘Voix de femmes pour la démocratie’ and is linked with many charities fighting cancer and AIDS.
She is associated with a program of ‘Amnesty International’ that strives to abolish death penalty. 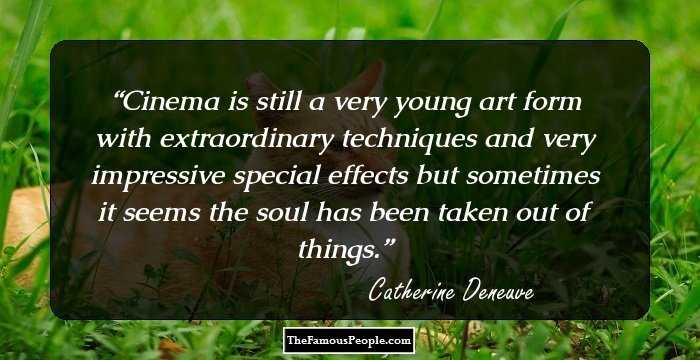 Trivia
Deneuve is considered the muse of designer Yves Saint Laurent, who designed her clothes for ‘Mississippi Mermaid’, ‘Belle de Jour’ and few others.
From 1994 to November 12, 2003, she was the ‘UNESCO Goodwill Ambassador for the Safeguarding of Film Heritage’.

Quotes By Catherine Deneuve | Quote Of The Day | Top 100 Quotes

See the events in life of Catherine Deneuve in Chronological Order 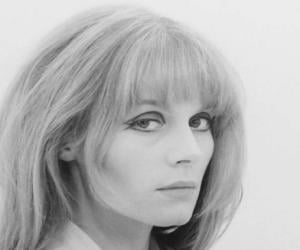