Shirdi Sai Baba was an Indian spiritual master who was revered by both Hindu and Muslim devotees. He himself did not follow any specific religion and advised his devotees to transcend the man-made barriers of religion and embrace the principle of universal love for all creatures. His devotees regarded him as a saint, fakir, and satguru, according to their individual proclivities and beliefs. Sai Baba was a very popular master during his lifetime and continues to be revered by people around the world, especially in India. He taught that the sole purpose of human existence was self-realization and directed his followers to follow a path of love, forgiveness, inner peace and charity. He followed no religion and made no distinctions based upon religion or caste. His teachings combined the elements of both Hinduism and Islam—he lived in a mosque, but assigned a Hindu name, ‘Dwarakamayi’, to it. He is believed to have arrived at Shirdi as a young man and remained there till his death. The details regarding the early life of Sai Baba remain a mystery as he did not divulge any information about his place of birth or birth name to anyone. At Shirdi, he gained the reputation for being a learned soul with his spiritual discourses and over the years endeared himself to thousands of followers from all over India and abroad
Continue Reading Below Indian Celebrities
Indian Spiritual & Religious Leaders
Childhood & Early Life
The details regarding Shirdi Sai Baba’s birth name, birth place and early life are obscure. It is not known with certainty whether he was born to Hindu parents or Muslim ones. However, his biographer Narasimha Swamiji claimed that Sai Baba was born as the child of Brahmin parents but was handed over to the care of a fakir who brought him up.
Even though his date of birth is also not known with certainty, some sources claim that he was born on 28 September 1835.
He is believed to have arrived at the village of Shirdi in the Ahmednagar District of Maharashtra, British India, as a 16 year old. He lived an austere and simple life, meditating for most of the time, sitting motionless under a neem tree.
Initially the people of the village were surprised at the mysterious appearance of this young boy who refused to provide any information about his name and whereabouts. Even though he spoke little, he eventually started discussing spiritual matters with the village elders and impressed everyone with his maturity and intelligence.
He also performed miracles and helped to solve the problems of the poor and the needy. His benevolent nature and miraculous powers attracted people from far and wide and soon he had a huge following of devotees.
After living in the village for three years, he left the place as quietly as he had arrived. Not much is known about his whereabouts after he left Shirdi though it is believed that he worked as a weaver for some time and became acquainted with many saints and fakirs. It is also reported that he fought with the army of Rani Lakshmibai of Jhansi during the Indian Rebellion of 1857. 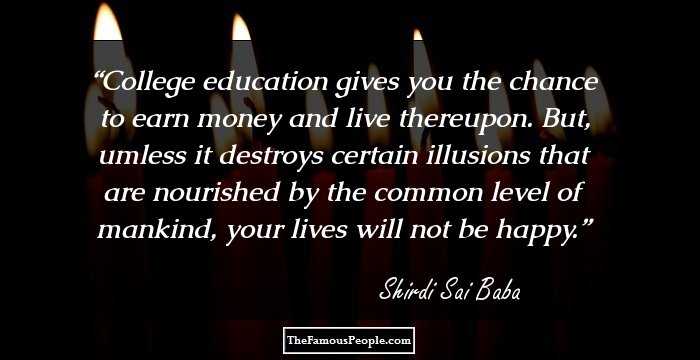 Who Is The Most Popular BTS Member?
Later Life
After a year of disappearing from Shirdi, he returned permanently in 1858. Since no one knew the young man’s real name, the villagers started addressing him as “Sai Baba”.
He started dressing in a knee-length one-piece Kafni robe and a cloth cap—articles of typical Sufi clothing. During this time many people identified him as a Muslim fakir and he even faced some hostility from the predominantly Hindu population.
He was very uncommunicative during this time as he would become lost in meditation for long periods of time. He had no shelter and no belongings. The villagers were finally able to convince him to take up residence in a dilapidated mosque.
Eventually he gained a reputation as a “Hakim” in addition to being a spiritual master. He maintained a sacred fire in the mosque from which he used to collect sacred ashes (‘Udhi’) which he gave to his visitors. He also treated the sick by application of the ash which was believed to possess miraculous healing powers.
Even though he did not follow any specific religion himself, he advised his devotees to read sacred Hindu texts like Ramayana, Bhagavad Gita, and Yoga Vasistha along with the Qur'an. He often expressed himself in a cryptic manner using symbols and allegories and stressed on the oneness of God. Some of his most well-known chantings were "Sabka Malik Ek" ("One God governs all") and "Allah Malik" ("God is King").
He encouraged charity and stressed the importance of sharing. He was known to be kind to all creatures—he lived on alms which were given to him by his devotees and used to share his food with hungry animals. His teachings emphasized on the principle of universal love towards all living beings without any discrimination. 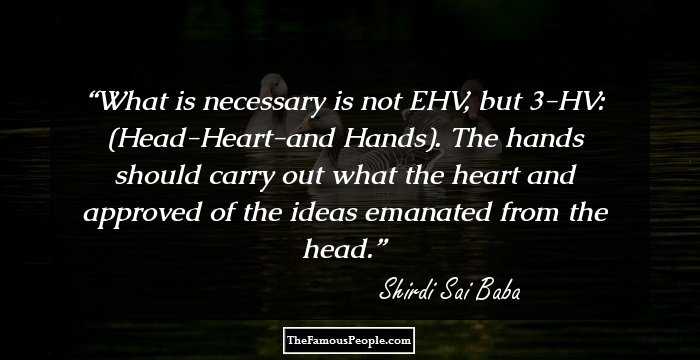 Quotes: Heart
Major Work
Shirdi Sai Baba is revered in India and worldwide as a spiritual master who transcended the barriers of religion. His teachings combined elements from both Hinduism and Islam, and one of his most famous epigrams, "Sabka Malik Ek" ("One God governs all"), is associated with the traditions of Hinduism, Islam and Sufism.
Personal Life & Legacy
Shirdi Sai Baba lived a very simple and austere life and did not keep any materialistic belongings.
He died (attained Mahasamadhi) on 15 October 1918 in Shirdi, breathing his last on the lap of one of his devotees.
Shirdi Sai Baba is very popular in India and in every large city or town there is at least one temple dedicated to him. He is a much revered figure outside India too, and his temples can be found in countries like United States, Netherlands, Kenya, Cuba, Canada, Pakistan, Australia, and Germany.
He has been the subject of several feature films and television serials in many languages in India. 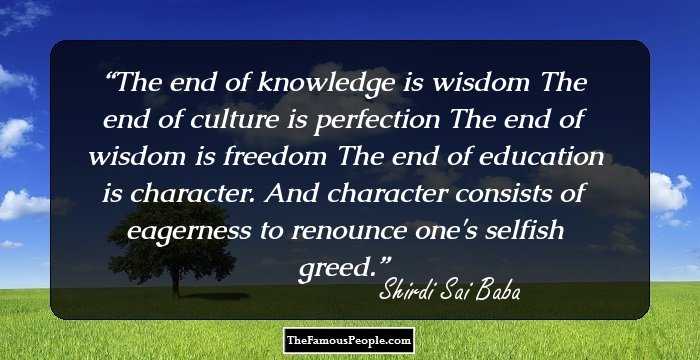