One of the most recognized and influential Pastors in the world, Rick Warren is the founder of the Saddleback Church, which is the eighth largest church in the United States of America. Regarded by ‘Time Magazine’ as one of the ‘100 Most Influential People in the World’, Warren has more than 300 community ministries. This Evangelical minister is also a successful author, whose works include ‘The Purpose Driven Church’ and ‘The Purpose Driven Life’ which was featured on the New York Times Best Seller list. He has spoken at many prestigious national and international forums including, the World Economic Forum in Davos, the United Nations, Harvard’s Kennedy School of Government and Time’s Global Health Summit. He also hosted the Civil Forum on the Presidency that featured back-to-back interviews of Presidential candidates, John McCain and Barack Obama. A pastor, philanthropist, theologian and global strategist, Warren has been active in social causes and spoken in churches across the world on issues like poverty, diseases and the increase of educational and employment opportunities. American People
American Men
Tall Celebrities
Tall Male Celebrities
American Spiritual & Religious Leaders
Childhood & Early Life
Richard Duane Rick Warren was born in San Jose, California to Jimmy Warren, a Baptist minister and Dot Warren, a high school librarian. He grew up in the neighbourhood of Ukiah, California.
In 1972, he graduated from the Ukiah High School, where he became the founder of The Fishers of Men Club, a Christian club in the school. He later graduated from the California Baptist University with a degree in arts.
In 1979, he graduated from the South-western Baptist Theological Seminary, where he obtained a Master of Divinity degree. He went on to receive a Doctor of Ministry degree from the Fuller Theological Seminary. 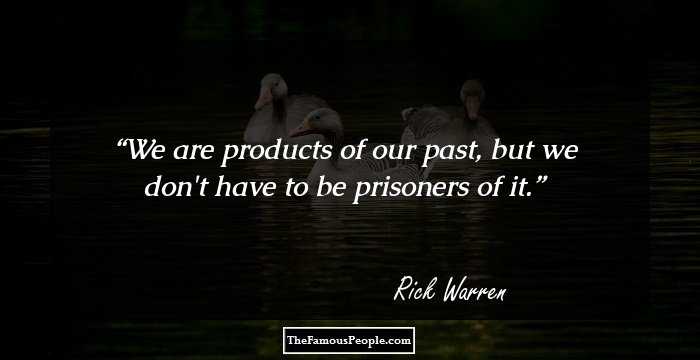 The Sexiest Men Of 2020, Ranked
Later Life
In 1973, by the time he turned nineteen, he was called to full-time ministry, while he was still a student at the California Baptist University. That year, he also drove to San Francisco to hear Pastor W.A. Criswell preaching.
In 1980, he gave his first public service speech at the Saddleback Church, which he founded at the Laguna Hills High School Theater, California. It was the occasion of an Easter Sunday and the service was attended by 200 people.
In 1995, he published ‘The Purpose Driven Church’, a book meant for pastors and church authorities. In this book, he highlighted the concept of God’s purpose rather than the ideology of the authorities on ministry.
In 2002, he came out with his book, ‘The Purpose Driven Life’, which was a devotional book, published by the Zondervan Christian media and publishing company.
In 2006, he spoke at the TED global set of conferences and that year his church (the Saddleback Church) hosted the Global Summit on AIDS, which was attended by Barack Obama.
In August 2008, he hosted the Civil Forum on the Presidency, a session of back-to-back interviews of presidential candidates, Barack Obama and John McCain.
In 2009, he collaborated with the Readers Digest Association in order to launch the Purpose Driven Connection, a publication that was made available quarterly.
In 2010, he was one of the speakers at Calvinistic Baptist Christian preacher and author, John Stephen Piper’s ‘Desiring God’ conference that was held at Minneapolis, MN. 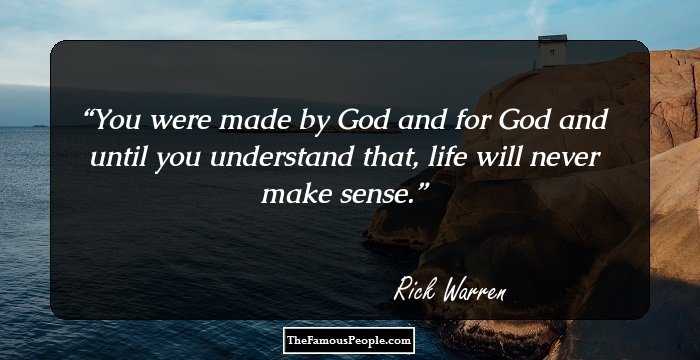 Quotes: You, Life, God, Never, Will
Continue Reading Below
Major Works
His book ‘The Purpose Driven Church’, which was published in the year 1995, was voted as the second most influential book in a survey conducted by George Barna.
Published in 2002, ‘The Purpose Driven Life’ was featured on the New York Times bestseller list. This was one of his bestselling books that sold over 30 million copies.
He is the founder of the Saddleback Church, which is an evangelical Christian mega-church. It is the eighth largest church in the United States of America.
Awards & Achievements
From 2005 to 2006 he was one of the elected members of the Council on Foreign Relations.
In 2005, the U.S. News and World Report named him as ‘one of America's Top 25 Leaders’.
He was featured on Time Magazine’s list of ‘15 World Leaders Who Mattered Most in 2004’.
In 2006, he was listed by Newsweek as one of the ‘15 People Who Make America Great'. 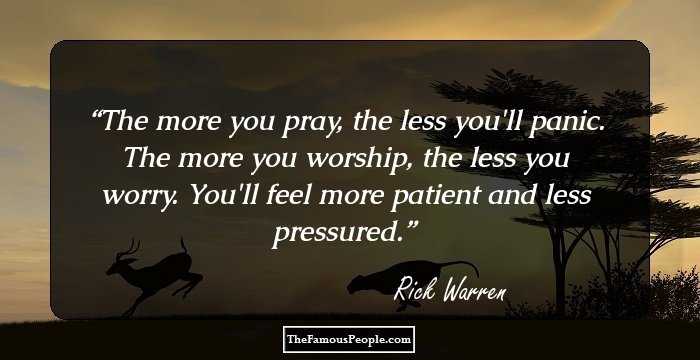 Quotes: You
Personal Life & Legacy
He is married to Kay Warren and they have three children - Amy, Josh, and Matthew. They also have four grandchildren.
In 2013, his family was struck by a tragedy when his youngest son Matthew committed suicide. It is believed that he committed suicide due to severe depression and mental illness.
Trivia
This American Christian Pastor and author, returned 25 years of the salary he had received from the church he worked in, back to the same church, after the increase in his book sales.
You May Like

Quotes By Rick Warren | Quote Of The Day | Top 100 Quotes

See the events in life of Rick Warren in Chronological Order