DID WE MISS SOMEONE?
CLICK HERE AND TELL US
WE'LL MAKE SURE
THEY'RE HERE A.S.A.P
Popularity Index
10
Film & Theater Personalities #1024
Actors #481
Quick Facts

Russell Tovey is an English actor, best known for his portrayal of a werewolf in the BBC drama series titled ‘Being Human’. Born and raised in a middle class English family in Essex, Russell became interested in the prospect of becoming an actor when he was a kid. He joined a theatre group at the age of 11 and appeared in a few theatrical plays and commercial advertisements. His first television break happened in 1994 when he appeared in the television series titled ‘Mud’. He made a good name for himself in the London theatrical circuit as well, playing key roles in plays such as ‘Henry V’ and ‘His Dark Materials’. After playing cameos in many television series’ in the early 2000s, he had his big acting breakthrough in 2008 when he played one of the key roles as George Sands in the critically acclaimed supernatural drama series titled ‘Being Human’. After that, he appeared playing critically acclaimed roles in series’ such as ‘Quantico’, ‘Years and Years’ and ‘Looking’. In addition, he has also been known for his critically acclaimed performances in films such as ‘The Pass’ and ‘Pride’. Russell Tovey was born Russell George Tovey, on November 14, 1981, in Billericay, Essex, to George Tovey and Carole Haynes. He was raised as the younger one among two brothers, and has an older brother named Daniel Tovey. He grew up in a middle class family with his father running a coach service, carrying passengers from Essex to the Gatwick Airport.

He enrolled into Harold Court School, and later into Shenfield High School. Initially, he became interested in studying history. Inspired by the history teacher in school, he himself aspired to become a history teacher.

His parents also supported him during most of his endeavours. He got a metal detector while he was young and his parents took him to various archaeological sites and excavation sites to feed his curiosity.

But eventually his career goals changed as he became exposed to the world of entertainment. He aspired to become an actor after watching films such as ‘Dead Poets Society’ and ‘The Goonies’. At the age of 11, he joined a local theatre and began his training in acting. At the age of 12, he appeared in ketchup commercial and while it was not his big claim to fame, it did help him getting noticed.

Following his high school graduation, Russell Tovey joined the Business and Technology Education Council at the Barking College. However, by then, his acting career had picked up a good pace and he began skipping roles in college theatrical productions, due to which he got expelled from the college.

In his pre-teen years, Russell appeared in a few television commercials. He eventually caught the attention of a talent agent, and due to the acting work, he began skipping his classes at school. His father wanted Russell to focus more on his studies, but his mother asked him to continue.

In 1994, he made his television debut, playing Bill Bailey in CBBC series titled ‘Mud’. He appeared in all episodes of the series and his performance was met with a critical acclaim.

In 1996, Russell Tovey further made a big television appearance when he appeared playing Dennis Sealey in the children’s education television series titled ‘Spywatch’. He also played key roles in plays such as ‘His Dark Materials’ and ‘His Girl Friday’, which were played in the National Theatre.

In the late 1990s and the early 2000s, he appeared mainly on television, playing guest and cameo roles in a number of television series’ such as ‘The Mrs Bradley Mysteries’, ‘The Bill’ and ‘Silent Witness’.

In 2001, he appeared making his feature film debut in the British historical drama film titled ‘The Emperor’s New Clothes’, wherein he played a small role as a recruit.

In 2005, Russell Tovey was seen portraying the role of Robbie McManus in the drama series titled ‘Messiah IV: The Harrowing’. In the next year, he appeared in the comedy film titled ‘The History Boys’, portraying a small role as a student.

Alongside working in films and television in the mid-2000s, he also kept appearing in theatrical plays, mostly in London. He was seen playing key roles in plays such as ‘A Respectable Wedding’, ‘The Laramie Project’ and ‘The Sea’.

In 2007, he began playing a recurring role as Budgie in the series titled ‘Gavin & Stacey’, and later appeared playing Ben in the show titled ‘Annually Retentive’.

Russell had the big career breakthrough in 2008 when he appeared playing a key role as George Sands in the BBC supernatural drama series titled ‘Being Human’. He first appeared in the series’ pilot, but other than him, all the cast members of the show were later re-casted. For his portrayal as a werewolf, Russell received applauds, with the series also earning accolades from the audience and the critics.

Owing to his role as George Sands, Russell’s popularity skyrocketed and he became a household name. The success of the series also helped him grab the attention of more producers and filmmakers. The character played by Russell dies in the fourth season, ending his association with the series.

While Russell Tovey portrayed George in ‘Being Human’, Russell appeared in other television projects as well. In 2008 to 2010, he played John Chivery in 10 episodes of the series ‘Little Dorrit’, and later appeared in the pilot episode of the series titled ‘The Increasingly Poor Decisions of Todd Margaret’.

In 2010, he was casted to play the lead role in the comedy series titled ‘Him & Her’, where he played Steve Marshall for 25 episodes. The series ran for four seasons and earned decent reviews.

Moreover, in the early 2010s, he was seen playing supporting roles in series’ such as ‘The Dog Rescuers’ and ‘What Remains’. He also appeared playing a guest role in the BBC series ‘Sherlock’, playing Henry Knight in the episode titled ‘The Hounds of Baskerville’.

Starting from 2012, his film career also picked up a pace. In 2012, he appeared in the comedy film titled ‘Grabbers’, playing one of the main roles as Dr. Smith. The film received its premier at the Sundance Film Festival and was met with positive reviews overall.

In the next few years, he further appeared playing key roles in films such as ‘Tower Block’, ‘Effie Gray and ‘Pride’.

As for his television roles, from 2011 to 2015, Russell Tovey narrated the successful documentary series titled ‘Sun, Sex and Suspicious Parents’, and appeared playing key roles in series’ such as ‘Looking’ and ‘The Job Lot’.

In 2016, he had yet another major career breakthrough when he began playing a regular role in the American thriller drama series titled ‘Quantico’. He appeared in the second and third seasons of the series and his performance met with a critical acclaim.

In 2016, he received yet another critical acclaim for his leading role as a football player named Jason in the drama film titled ‘The Pass’. The film received its premier at the BFI Flare Film Festival and it was hailed as Russell’s career best performance. The film was widely appreciated by the critics. He further appeared playing key roles in films such as ‘Mindhorn’ and ‘The Good Liar’.

Russell Tovey is gay. He said that he first realized it when he was 15 years old but he was only able to confront his parents when he turned 18. His parents became afraid of him contracting HIV and his father had a strict disagreement with his son. He said that if he had known it before, he would have had his son undergoing hormone therapy.

Russell began dating Steve Brockman, a rugby coach, in 2016. They got engaged in March 2018 but they parted ways a few months later, only to be reunited in 2019. They have been together since.

See the events in life of Russell Tovey in Chronological Order 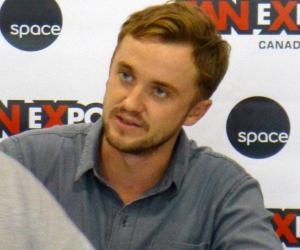