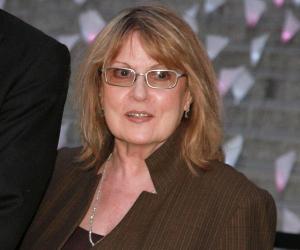 Who is Christopher Walken?

Christopher Walken is a renowned American actor who has more than a hundred films and television shows to his name. He is known in the industry as an actor who works all the time and has not been very selective about the roles he has been offered. His rise to fame was the 1977 film 'Annie Hall' by Woody Allen. Walken started off with theatre when he was still a teenager and by the early 1970s, he had begun his journey in the film industry. He is known to have undertaken a variety of projects including music videos by popular artists. He picked up the tools of his trade, as well as dancing, from the Hofstra University & ANTA. He has gained popularity in the past as a guest host in 'Saturday Night Live'. Known for his characteristic dialogue delivery and unique voice, he has played several edgy characters and criminals, but has also received positive acclaim for comedy roles. For his distinctive speech, he has often been targeted in spoofs, satires, and imitations. He won the Academy Award for Best Supporting Actor for his role in 'The Deer Hunter' (1978). Comedians
American Men
New Yorkers Actors
Hofstra University
Childhood & Early Life
Christopher Walken was born Ronald Walken on March 31, 1943 in Queens, New York, to Rosalie and Paul Walken. Christopher was the pseudonym that he adopted later on.
He worked as a child actor along with his brothers, as early as the 1950s. His first outing on stage was as a dancer when he was just three years old.
In his teens, Walken worked in a circus as a lion tamer.
After a year at the Hofstra University, he dropped out when he landed the role of Clayton Dutch Miller in a revival of Best Foot Forward. 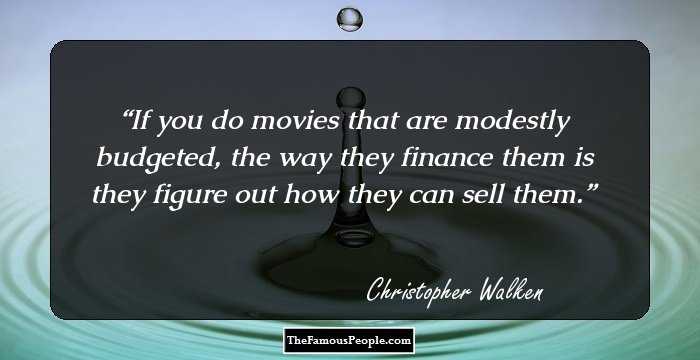 Tall Celebrities
Tall Male Celebrities
Aries Actors
Male Comedians
Career
During 1953–1965, he became a regular in television productions and soap operas like 'The Wonderful John Acton', 'The Guiding Light', and 'Naked City' among others. Meanwhile, his career in theatre flourished.
At the Broadway premiere of 'The Lion in Winter', Walken played the role of King Philip of France.
It is around this time, in 1964, that he changed his name from Ronald to Christopher after a friend suggested that it suited him better.
Walken's feature film debut was a minor role in 1971 opposite Sean Connery in Sidney Lumet's 'The Anderson Tapes'.
His breakthrough role came with Woody Allen's 'Annie Hall' in 1977, in which he excelled in the role of Duane, the borderline neurotic and homicidal brother.
Walken delivered a stellar performance in 'The Deer Hunter' by Michael Cimino in 1978, one that won him the Academy Award for Best Supporting Actor.
Walken went through some amount of turmoil in his life during the shooting of 'Brainstorm', when his co-star, Natalie Wood, drowned near the Santa Catalina Island during a Thanksgiving boating trip on November 29.
He starred in 'A View to Kill', the James Bond film starring Roger Moore as the antagonist Max Zorin in 1985, and by this time, he had become renowned for his ability to play negative roles.
In 1992, he appeared in Madonna's coffee table book, 'Sex', and also starred as a villain in the movie 'Batman Returns'.
Continue Reading Below
His next major film was 'True Romance', scripted by Quentin Tarantino. He also played a supporting role in Tarantino's 'Pulp Fiction'.
In 1996, Walken starred as a sadistic gangster in 'Last Man Standing', and in the same year, had a prominent role in the video game, 'Ripper'
He played Frank Abagnale Sr. in 'Catch Me if You Can', a role that fetched him a nomination for an Academy Award for Best Supporting Actor.
Through and beyond the 1990s, Walken has been a popular guest-host in 'Saturday Night Live' multiple times.
Walken played significant roles in comedies like 'Wedding Crashers' (2005) and 'Click' (2006).
He played roles of criminals in both, 'Kill the Irishman' in 2011 and 'Stand Up Guys' in 2012. 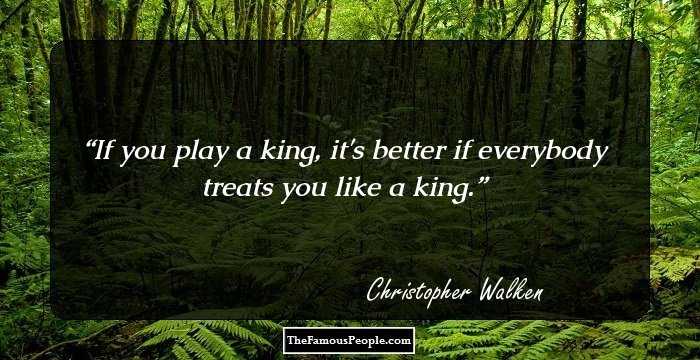 American Actors
American Comedians
Actors Who Are In Their 70s
American Film & Theater Personalities
Major Works
Christopher Walken’s best work in films remains his performance in 'The Deer Hunter' (1978). The film won five Academy Awards out of which Walken bagged the award for Best Supporting Actor. For the same, he was also nominated in the BAFTA and Golden Globe Awards. The film grossed $48.9 in the US box office.
In his later years, he arguably delivered one of his best performances in 'Catch Me if You Can'. In the category of Best Supporting Actor, he was nominated in the Academy Awards, won the BAFTA and Screen Actors Guild Awards among many others. The film was the 11th highest grossing film in 2002, with a worldwide total of $352.1 million.
Continue Reading Below
Recommended Lists:

Aries Men
Awards & Achievements
He won the Academy Award and the NYFCC award for Best Supporting Actor for 'The Deer Hunter' and had numerous nominations.
For his performance in 'Catch Me if You Can' in the same category, he won a BAFTA, a Screen Actors Guild, and an NSFC award, and many nominations.
Walken received his first Emmy Award nomination for Outstanding Lead Actor for his role in 'Sarah, Plain and Tall'.
He won an American Comedy award for his contribution to the show, Saturday Night Live.
He also won a VH1 award and an MTV Video Music award for his performance in Fatboy Slim's 'Weapon of Choice'. 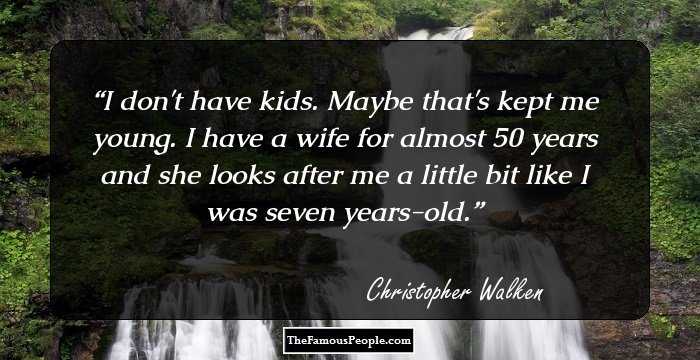 Personal Life & Legacy
Walken is married to Georgianne Thon since 1969, and have no children. They live in Wilton, Connecticut.
He and his wife own a beautiful holiday home in Block Island, off the coast of Rhode Island.
Trivia
His eyes are of different colors, one hazel, another blue, a condition called heterochromia.
Walken is known to have endorsed President Barrack Obama for re-election in 2012.

Quotes By Christopher Walken | Quote Of The Day | Top 100 Quotes

See the events in life of Christopher Walken in Chronological Order