(One of the Most Successful Male Tennis Players of All Time)

Advanced Search
Deemed by pundits as the greatest tennis player of all time, Roger Federer is known for his speed, fluid play, and exceptional shot-making. His powerful smashes, excellent footwork, and efficient technique not only made him win several matches, but create history as well. He holds the record for being the only player to hold the number one position for 302 weeks overall, out of which he held the position for 237 consecutive weeks from 2004 to 2008. He remained in the top two positions for eight consecutive years. He then held the top three positions from 2003 to 2012. He has the distinction of being one amongst the eight tennis players in the world to have a career ‘Grand Slam.’ Furthermore, he has won a total of 20 ‘Grand Slam’ titles till date. He is also the proud recipient of Olympic gold and silver medal for doubles and singles respectively. Chris Evert
DID WE MISS SOMEONE?
CLICK HERE AND TELL US
WE'LL MAKE SURE
THEY'RE HERE A.S.A.P
Quick Facts

Swiss People
Swiss Men
Leo Tennis Players
Male Sportspersons
Swiss Sportspersons
Childhood & Early Life
Roger Federer was born on 8 August 1981, in Basel, Switzerland, to Swiss father Robert Federer and South African mother Lynette Federer. His mother was of Dutch and French ancestry.
Federer spent most of his early life near the French and German border, which made him fluent in German, French, and English. Raised as a Roman Catholic, he took to playing tennis and soccer at an early age.
Though everyone in his family enjoyed the game, it was young Federer who showed promise of making it big. By the time he turned 11, he became one of the ‘Top 3 Junior Tennis Players’ in Switzerland.
He invested his energies on tennis alone, leaving behind all other sports. At the age of 14, he started playing tournaments, practicing and conditioning himself to become a professional. Thereafter, he clinched the ‘National Junior Championship’ in Switzerland.
His prodigious talent and playing skills earned him a sponsorship at the ‘Swiss National Tennis Center’ in Ecublens. In 1996, he was part of the ‘International Tennis Federation’ junior tennis circuit.
In 1998, before launching himself professionally, he left his mark as an amateur by winning the junior ‘Wimbledon’ title and the ‘Orange Bowl.’ Subsequently, he was recognized as the ‘ITF World Junior Tennis Champion of the Year.’ 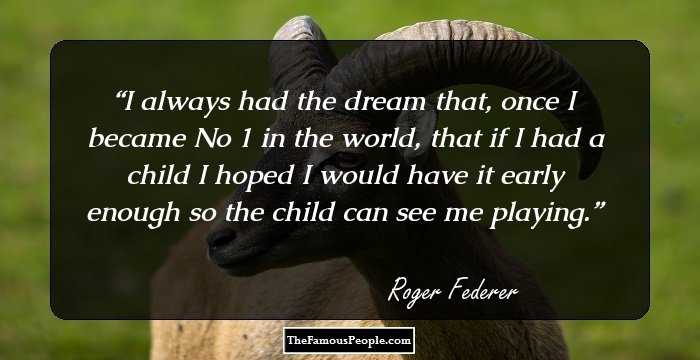 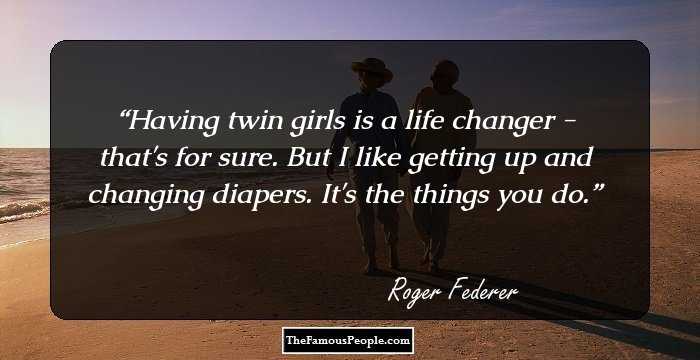 Quotes: You, Life, Like
Awards & Achievements
From 2003 to 2018, he was felicitated with the ‘Fans' Favorite Award’ by the ‘ATPWorldTour.com.’
His colleagues, rivals, and competitors have voted in favor of Federer for the ‘Stefan Edberg Sportsmanship Award’ on 13 occasions. He won the award from 2004 to 2009, and then in 2011 and 2017.
He is a proud recipient of the prestigious ‘Laureus World Sportsman of the Year’ award. He has won the award on five occasions; from 2005 to 2008, and then in 2018.
In 2006 and 2013, he was conferred with the ‘Arthur Ashe Humanitarian of the Year Award.’
Personal Life & Legacy
He got married to tennis player Mirka Vavrinec, a former member of the ‘Women’s Tennis Association,’ on April 11, 2009. The two had met during the ‘Sydney Olympics’ in 2000.
The couple was blessed with identical twins, Myla Rose and Charlene Riva, on July 23, 2009. On May 6, 2014, they were blessed with another set of twins, whom they named Lenny and Leo. 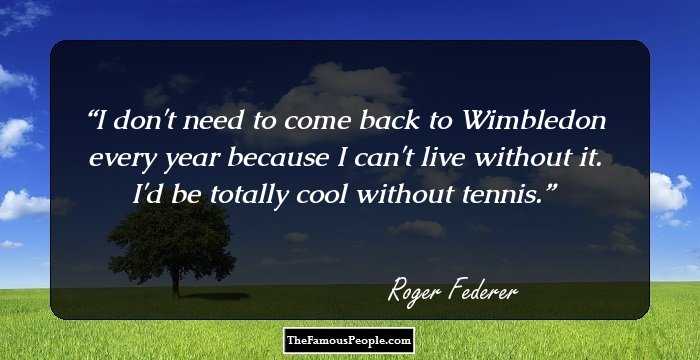 Trivia
This professional tennis player is popularly referred to as ‘Fed Express’ or ‘FedEx.’ People even call him ‘Swiss Maestro’ or simply ‘Maestro’ for his exceptional skills and expertise. His fans often call him the G.O.A.T. (Greatest Of All Time).

Quotes By Roger Federer | Quote Of The Day | Top 100 Quotes

See the events in life of Roger Federer in Chronological Order