Roger Joseph Ebert was a famous American film critic, who gained popularity with his film reviews in the Chicago Sun-Times, a newspaper he worked for since 1967 until his death. His flair for writing and love for movies was quite evident from his writings and many writers considered him, from the beginning of his career, as one of the best American film critics in the world. His fame and creative style took him to the television and he started co-hosting PBS’s ‘Sneak Previews’ with Gene Siskel. Both the film critics used to complement each other on the television and brought humor and creative panache to the show. The duo is still known for creating and trade-marking the phrase "Two Thumbs Up”. With the success of their partnership and televised film criticism in general, ‘Sneak Previews’ was followed by variously titled ‘At The Movies’ shows and after Siskel’s death, Richard Roeper became Ebert’s critic partner on the television. Apart from film criticism, Ebert is also known for co-writing screenplays. He is the first film critic ever to receive a Pulitzer Prize for Criticism, which is otherwise an award strictly reserved for creative writing. He was also the first film critic to receive a star on the Hollywood Walk of Fame.
Continue Reading Below Cause of Death: Thyroid Cancer

American Celebrities
Film Critics
Screenwriters
American Men
University Of Chicago
Childhood & Early Life
Roger Ebert was born in Urbana, Illinois to Annabel and Walter Elbert. His father worked as an electrician. He grew up in a middle-class environment, but his father was ambitious for him to have a better future.
He attended the Urbana High School and became the editor-in-chief for his high school newspaper. His interest in journalism ignited while he worked as a sports journalist for The News-Gazette. He also became a part of science fiction fandom.
With his extra-ordinary achievements, he was allowed to take early classes at the University of Illinois while he was still at school. Soon after, he joined Daily Illini as an editor and got his first film review published in 1961.
He attended University of Cape Town on a Rotary Scholarship for a year and then returned back to do PhD at the University of Chicago. To support himself, he became a feature writer at the Sun-Times in 1966. 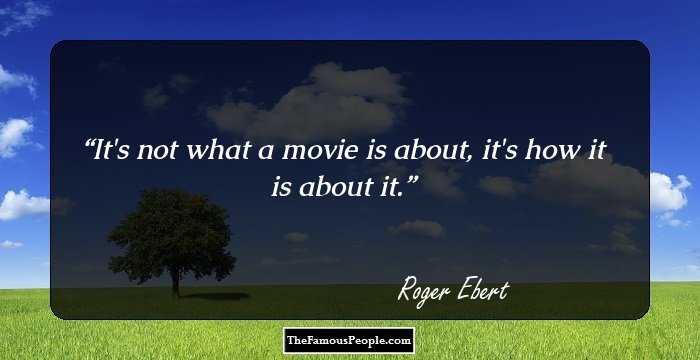 The Best Black Actresses Of All Time
Career
Working as a writer alongside the PhD studies proved to be a very time consuming process for Ebert and in 1967, he left University of Chicago in the middle to pursue his dream of becoming a film critic.
Keeping his eye on the goal, Ebert joined Chicago Sun-Times as a full time film critic in 1967 and started flourishing as a writer. He published ‘Illini Century: One Hundred Years of Campus Life’.
In 1969, Reader’s Digest published his review on ‘Night of the Living Dead’ and he co-wrote the screenplay of ‘Beyond the Valley of the Dolls’. Around the same time, he was appointed as a guest lecturer at the University of Chicago.
In 1975, he began co-hosting a weekly film review TV show ‘Sneak Previews’ produced by the Chicago public broadcasting station WTTW. Sometime later, Gene Siskel joined him and the duo became famous for their film reviews.
Ebert co-wrote screenplays with Russ Meyer from 1976–79. These included: ‘Beneath the Valley of the Ultra-Vixens’ which was a satirical sexploitation movie, ‘Up!’ which was a sex comedy, and ‘Who Killed Bambi?’ which was intended to star ‘Sex Pistols’—a British punk rock band—but was shelved.
In 1982, the duo launched another film critic show under the title ‘At The Movies With Gene Siskel & Roger Ebert’ and about four years later, Walt Disney purchased the program and started the ‘Siskel & Ebert & The Movies’.
Ebert, along with Siskel, made a guest appearance on an episode of the animated TV series’ The Critic’ in 1995. It was a parody of the film ‘Sleepless in Seattle’. In the following year, Ebert appeared in a documentary ‘Pitch’.
In 1999, after Siskel’s death, ‘Sneak Previews’ was retitled as ‘Roger Ebert & the Movies’. The show had rotating co-hosts while Ebert remained the consistent part of the show and in the following year Richard Roeper was made the permanent co-host.
Ebert had a cameo in the film ‘Abby Singer’, in 2003. He also founded his own film festival,’ Ebertfest’, in his home town of Champaign, Illinois, and made a regular appearance at the Hawaii International Film Festival.
Continue Reading Below
In 2008, he ended his association with the Walt Disney Company because they wanted to change the show and Ebert did not agreed with it.
In 2009, Ebert featured in a documentary ‘For the Love of Movies: The Story of American Film Criticism’. He discussed his experience of working with Gene Siskel and also expressed his views on the current issues of film reviewing.
Ebert received the honorary life membership of the Directors Guild of America in 2009. In the following years, his final TV series ‘Ebert Presents: At The Movies’ premiered and it featured more traditional film reviews. 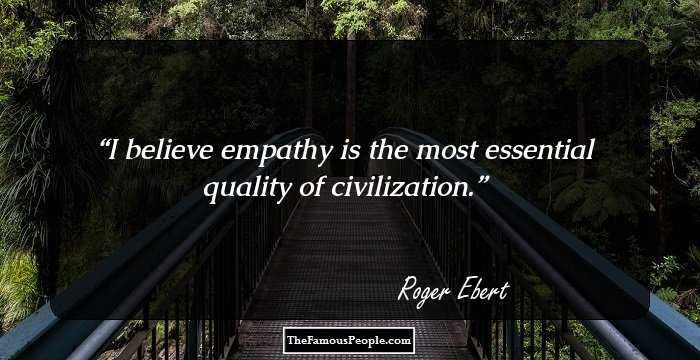 Quotes: Believe, I
Major Works
Ebert was famous for television film reviewing with Siskel in the PBS’s ‘Sneak Previews’ which started airing in 1975. From there on, discussing the movies verbally on the television became in-vogue and they co-hosted variously named ‘At The Movies’ shows.
Awards & Achievements
He was the first film critic ever to have won the Pulitzer Prize for Criticism. A pioneer in the art of film criticism, he also became the first film critic to receive a star on the Hollywood Walk of Fame. 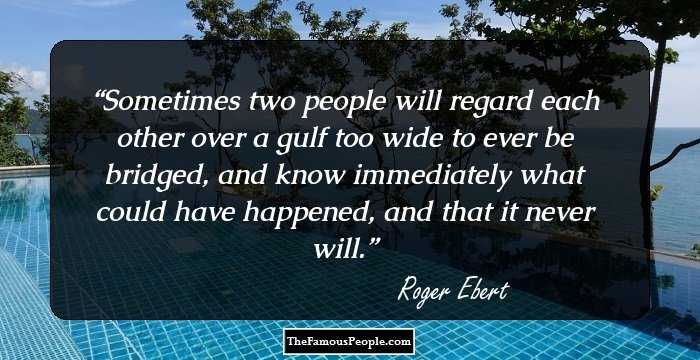 Quotes: Never, Will
Personal Life & Legacy
Ebert married at the age of 50 in 1992 to Charlie Hammelsmith. He explained why he got married at an odd age by saying that he always wanted to get married after his mother died.
Ebert was diagnosed with thyroid cancer in 2002. Also, he underwent surgery for cancer in his salivary gland. Four years later, he had surgery to remove cancerous tissue near his right jaw and after that his carotid artery burst.
In 2007, he lost his speech and adopted a computerized voice system to communicate and went through surgeries to restore his voice and address the complications from his previous surgeries.
He died on April 4, 2013, at the age of 70, finally losing his 11-year battle with cancer.
Trivia
A few days before his death, Ebert ended his blog by posting, "So on this day of reflection I say again, thank you for going on this journey with me. I'll see you at the movies."
In 2011, he won one of the weekly caption contests in The New Yorker after more than 100 attempts.
He was a longtime friend of the famous television personality Oprah Winfrey.
He was a recovering alcoholic and was a part of Alcoholic Anonymous. He had quit drinking in 1979.
Recommended Lists:
Film & Theater Personalities #1712
Media Personalities #105
Critics & Connoisseurs #4
You May Like

Quotes By Roger Ebert | Quote Of The Day | Top 100 Quotes

See the events in life of Roger Ebert in Chronological Order